I WAS DREAMING WHEN I WROTE THIS 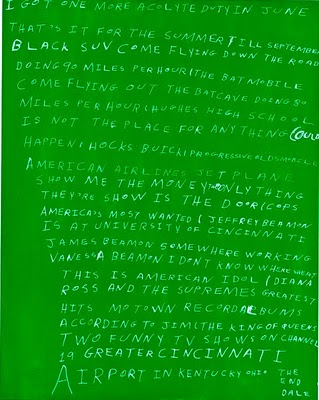 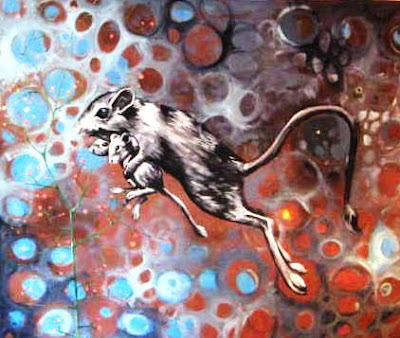 "Remember Me as a Good Thing: Words & Images by Kendra Bayer-Foreman & Dale Jackson" opens April 30, 2010, with a reception 6 to 10 pm at Thunder-Sky, Inc. The exhibit closes June 16, 2010. It's another piece of evidence to prove that art is art and artists are artists and 2 + 2 = 5. Dale is someone we met through Visionaries & Voices (he still goes there one day a week, I think). Kendra we met back in the day (1999) through a one-person show she did at an art center in Hamilton, OH. Dale and Kendra have collaborated on a couple pieces, but mainly their works play off each other so well that is seems kind of redundant. The show itself is a cool collaboration. Dale makes art out of overheard words and phrases, painstakingly recreating conversations, TV talk and memory-speak in careful stenography on wood panels. Kendra paints delicately surrealistic paintings, the visual equilivant of Dale's accidental poems; her pictures are dream-conversations somehow recorded without words. "Remember Me as a Good Thing" showcases both their bodies of work as beautifully serendipitous, and sweetly mysterious, pieces of an ongoing puzzle, every wall in the exhibit a jigsaw of information you don't actually understand until you stop trying to. Top: "Black SUV," Dale Jackson, acrylic paint maker on wood panel, 2010. Bottom: "Memory," Kendra Bayer-Foreman, acrylic on canvas, 2009. Photo of Dale Jackson's work by Bob Scheadler, Daylight Studios.
Posted by Keith at 8:38 AM No comments: 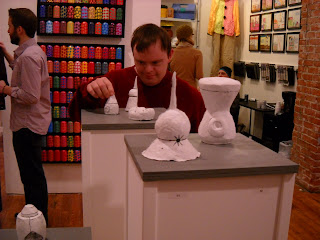 This is one of my favorite pictures from the opening of "Out of Order: Paintings & Other Creations by David Jarred & Kevin White" Friday February 26, 2010. The show closes April 12, 2010. Kevin took a time-out from drawing that night to explore David Jarred's sculptures... The evening was packed with people, poetry, food, and the debut of Milan DelVecchio's short animated film based on the works. This photo is totally my favorite example of 2 + 2 = 5.
Posted by Keith at 12:47 PM No comments: