Get It Where You Can 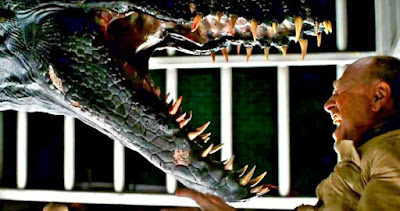 Jurassic World: Fallen Kingdom is a big old-fashioned summer movie overstuffed and draggy in many aspects, but also strangely exhilarating in others.  It tries really hard to be what it is, and trying so hard gets to places inside your head you don't think it could.

Case in point, a scene involving the evil military overlord of a project in which dinosaurs from the gutted, lava-drenched amusement park have been Noah's-Arked to a secluded mansion basement in order to be auctioned off to rich oligarchs and others, for military and other eveeeel purposes.  Above is a photo from the scene.  Ladies and gentleman, a dinosaur specifically and genetically designed as a "killing machine" devouring, literally, piece by camouflaged piece, that tough-talking military-industrial-complex 4-star General.  It is breathtaking, the CGI butchery, and the setup is Dream Fulfillment 101.  The general is a one-note villain without any redeeming qualities (he even drops a "nasty woman" comment in there somewhere).  He is a stand-in for MAGA-ites all across this Great Nation, and until I saw this scene unfold I really did not understand the visceral wear-and-tear all of this Donald Tweetstorm crap causes.  I like to not think about it actually.  I have a tendency to shut it out, to joke it away, to do whatever I can to work through it.  Resistance is futile a lot of the time.  I was in that cage with that dinosaur, applauding its savagery.  Dream come true.

It's kind of pathetic to admit, and maybe it's just what it is, but this whole era, this whole ordeal takes its toll in ways that can get conjured without a lot of provocation or even reason, without thought.  Jurassic World: Fallen Kingdom is a beautiful and stupid thing, but in that moment I was having a spiritual/feral connection to something far sadder and deeper, the anger and resentment caused by a dictator and his me-first fixations, his stupidity, greed and cross-eyed dedication to whatever he sees fit to say and do and cancel and revise.  And also all his minions and fans out there spreading his gospel and spleen.

That jazzed-up dinosaur feast was a sort of pledge to allegiance re-calibrated for these stupidly horrific times.
Posted by Keith at 1:01 PM No comments: 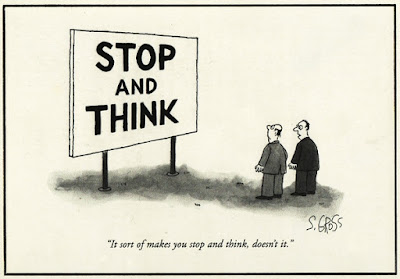