As I Want You to Be

Last Saturday we went to see a Nirvana cover band at Bogart's in Cincinnati, a sort of rundown, grungy, funky venue that houses a lot of memories for me (we saw Foo Fighters there right when their first album came out, Frank Black sans Pixies, Flaming Lips, etc.).  It was a beautiful thing to hear those early nineties songs again, in the land of the living, played the way they should be played, banged out and elemental, no talk.  The cover band's name is Orchid in the Ivy, and I know nothing about them except that they can play Nirvana songs, but that's okay.  They did it exactly the way they should have:  shut-mouthed and reverent in the church of skillful and demented punk-pop.

Kurt Cobain's main talent, above all else, was his obsessive welding together of vulnerable melodies with pure chainsaw fury.  His down and dirty hurt was always glazed with an outsider-art attention to detail, whimsy and torture welling up into a burst of guitar chords that sound kind of familiar at first but right when you get into it you also get assaulted.  The assault was Kurt's art escaping its prison, letting you have it.  He was pissed at you for enjoying his little fucking ditties, and yet those ditties, and your response, was all he cared about.

And so all week I've lived in the shadow of that cover-band cathedral, listening to all the songs again, mesmerized by all he was able to pack in his short time on earth.  One song kind of became my mantra as I drove around in my Kia Soul:  "Come as You Are."  The second single off Nevermind, that song has incredible chops, a powerful bass hook that grinds you into its atmosphere, and lyrics that don't give away anything but also tell you everything you need to know:

What the hell is more vulnerable and succinct than that?

That surrender somehow confiscates an era's cynicism.  It lets us know what the world is about more than a whole slew of newspaper articles or tweets or speeches.  It's not poetry as much as secret code. Needless to say I got into that song in 1992, when I was 27 and in graduate school.  I was in a fiction-writing class, and I played the hell out of "Come as You Are" while drafting the short story I scanned in and uploaded below.  I wrote it in three weeks and decided not to submit it to workshop because I loved it so much and didn't want people to pick it apart.  It turns out to be the first piece I was able to get published in a national magazine.

Christopher Street was the bastion of gay lit back in the 70s and 80s, so I got in on the tail-end of its glory and tenure, but am still kind of proud that they chose to publish "Mars," which I just reread, all caught up in my Nirvana k-hole.  It's not a bad piece of work.  I recognize all kinds of tricks and tics that make what I write what I write forming within it:  simple declarative no-nonsense sentences and paragraphs, a cryptic poetry circulating inside scenes revealed with as little poetry as possible.  Not a lot of laughs in this one, but I learned as I went how to make things at least a little more comic.  "Mars" is about a foster-kid named Paul who eventually gets brutally killed, after a life spent trying not to be what everyone wants him to be.  It has a sort of shadow-narrative, as well (I was all into The Great Gatsby at the time and wanted to white-trash-gay that Fitzgerald shit up), about a gay not-foster-kid who sees in Paul a specter of meaning and transcendence nobody else can in his world.

But that song, right?  "Come as You Are," all momentous and full of doom and tenderness.  I wanted that to be in the story too.  I followed its rhythm and snark as I wrote, and when I saw the watery-rusty-chandelier music video, with Kurt with his dyed-amber hair and nasty green sweater and pale-angel countenance, singing into the camera like the camera was his parole officer, well then I understood where I stood in the world of literature and art and just the world:  I was trying to not so much elevate trash and tragedy as to grasp it through the glamorous haze of punk's magic mirror, a reflection giving off such a shitty glow you start to understand how sometimes you can't turn the lights on and you can't turn the lights off.  You can only wait for things to settle back down so you can go to work.

It's a sad story, "Mars."  I was afraid to go back and read it again because I thought I might be embarrassed by its sophomoric attempts at gay grunge, but nope:  it's pretty good.  It has all kinds of chasms and humorless hurts and yet there's also a strange, sweet, unspoken love that slithers through it, kind of the way Kurt's voice growls and whimpers through "Come as You Are."

No it doesn't have a gun. 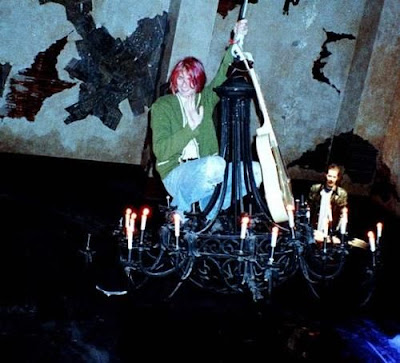 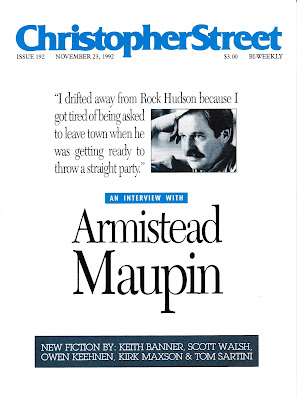 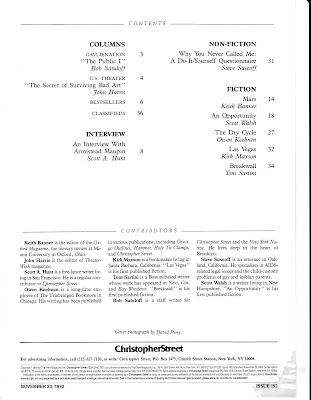 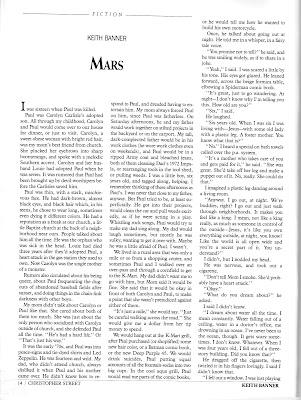 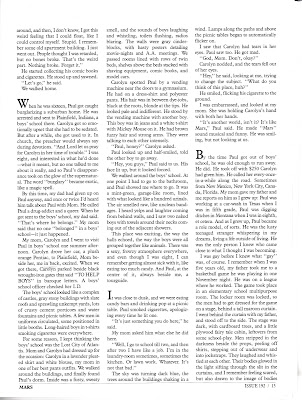 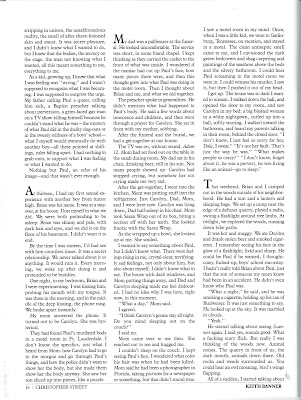 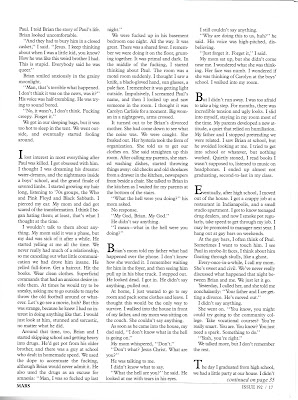 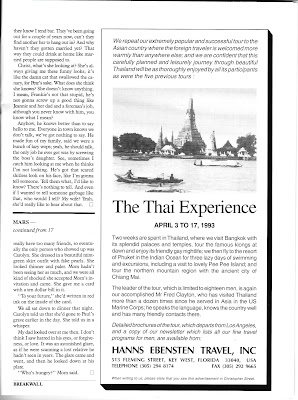 The Horror, the Horror


I haven't written a post in almost three months.  Too much stuff to do, plus I'm working on getting a draft of a novel done, which takes a lot of concentration and soul and nerve.

Which brings me to why I'm blogging now:  I stumbled on so much concentration and soul and nerve in a new independent movie I've watched twice now I felt compelled to sit down and do this.   The movie is Krisha, and it is written and directed by Trey Edward Shults, starring his aunt Krisha Fairchild.  It's his first full-length movie, and it is a masterpiece of technical skill and empathy and horror.

Watching Krisha is so revelatory because of its concise, controlled madness, banality and sorrow merged with a slick, dynamic sense of style, kind of like if Hitchcock and Cassevettes had a baby.  It mostly takes place inside a Houston, Texas suburban McMansion on Thanksgiving Day, with cars parked all along the grass and in the driveway.  A sad busted-up truck pulls up, the bottom of a hippie skirt sticking out of the closed driver door.  Krisha gets out in all her Sleeping-Gypsy glory, grabs her suitcase on wheels and initially goes to the wrong McMansion, finally stumbling onto the right one, where her sister and other family-members, including a son she abandoned many years ago, take her back into the fold in scenes so awkwardly meaningful and breathtakingly real you feel like you're watching security footage, not a movie.

And yet it's security-footage once removed, filtered through the brain and heart of a true artist.  Shults knows exactly what he is doing, and on a shoe-string budget with his actual family-members doing the acting he produces thrilling set-pieces, lush camera-work, effortlessly composed yet completely on-point scenes that reveal so much without curling into sentimentality of any kind. He can pan, grab a close-up, mute the sound, fixate on an everyday object, all in one swirl, and with all of that he's able to relay tons of fact and joy and hate without dabbling in exposition or dialog.  It's all visual and movement.  He's done his homework, and yet he doesn't show off:  it all serves the story he's telling, the people he's trying to figure out.

The lead actor, Krisha Fairchild playing Krisha, devastates with her moves from smug spiritual priestess to terrified little girl to jealous drunk Medusa yearning for her own version of innocence and happiness to return.  It's one of those performances that linger in your head, just like the movie does, and you can't think of anyone else, movie star or not, who could have pulled it off any better.  Krisha sets up her own little fiefdom in an upstairs bedroom in the house, pulling out pictures and her little locked box of drugs, her Ziplock baggie of makeup, resting her sweet little dog in a blanket on a sofa. That room she takes over is like the psychological nest in Roman Polanski's Repulsion, with Fairchild taking on Catherine Deneuve in the vulnerable yet terrifyingly insane department.  But you fall in love with Krisha in a way you don't with Polanski's character-study.  It's Schults' gaze I think.  Even though his aunt is playing a part, you feel a connection through the camera that's truthful, hurt, full of love, not willing to make amends.  The whole setup is dead-on kitchen-sink tragedy but then it reinforces itself, building into a love-letter written to someone you can't find a way to love even though it's all you want to do.

Krisha is at times a horror movie, a high-style sitcom, a meditation on family and love and loss, an experiment in style, and a visual poem that takes everyday objects and situations and invests in them a Kubrickian coldness and intensity that leave you feeling as though you've seen something brand new and yet totally recognizable, comforting in its strangeness.

At the end of Krisha, when all goes to hell, you feel bruised and elated, kind of astounded by what art can really do.
Posted by Keith at 8:43 AM No comments: