Born in Cincinnati in 1981, Antonio Adams has been drawing, painting and creating since he was a little boy. Now his work is collected nationally, and he has been featured in newspaper articles and television news stories. He is one of the co-founders of Visionaries & Voices, an arts organization for artists with disabilities in Cincinnati, as well as Thunder-Sky, Inc., an outsider art gallery also in Cincinnati. His sculptures, paintings and drawings have been featured at The Contemporary Art Center (Cincinnati), The Cincinnati Art Museum, Base Gallery, Visionaries & Voices, the Pittsburgh Folk Art Exhibit and Symposium, the Outsider Art Fair in New York City, Middletown Fine Arts Center, Fitton Center for Creative Arts (Hamilton, Ohio), University of Cincinnati Gallery, Country Club Gallery (Cincinnati and Los Angeles), and In the Gallery (Nashville, Tennessee). His art was featured last fall in an exhibition at the Museum of Everything in London, England.

A cofounder of Visionaries & Voices and Thunder-Sky, Inc., Bill Ross is a graduate of the Herron School of Art in Indianapolis, and has exhibited his work in Chicago, Indianapolis, and Columbus, Ohio, as well as locally here in the Cincinnati area at Designsmith Gallery and 1305 Gallery in Over the Rhine and Carnegie Visual and Performing Arts Center in Covington, Kentucky. He recently was a visiting artist at the Cincinnati Art Museum. He is a social worker for people with developmental disabilities full-time, and oversees a weekend art-making program every Saturday at Thunder-Sky, Inc. in Northside. His paintings and sculptures investigate an otherworldliness that is both innocently garish and garishly innocent: images from storybooks collide with eerie narratives of loss and disjuncture. One of the highlights of both his social-work and visual arts career was being able to support and champion Raymond Thunder-Sky, a Cincinnati artist and icon known as “the Construction Clown.”
Posted by Keith at 11:43 AM 1 comment: 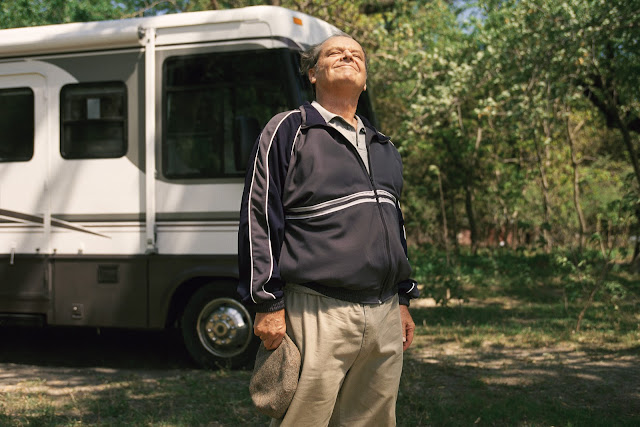 About Schmidt is a 2002 Alexander Payne movie in which Jack Nicholson is a completely anonymous retiree surrounded by completely anonymous furniture, cars, people, feelings, and landscapes.  The monotone allows Nicholson to branch out somehow, to get sentimental without losing the banality and absurdity of his conquest.  The movie is rooted in letters he writes to an "adopted" African boy he found through a TV infomercial voiced by Angela Lansbury.  In any other movie, those letters would come off as horrible gimmicks, ways for Nicholson's Nebraska retiree to show his "humanity," or worse ways to satirize his lameness.  Payne does both at the same time.  Satire and sentiment blend into an approximation of looking without judging, feeling what somebody else feels while also maintaining a sane distance so you can't turn Schmidt into a symbol.  He's just Schmidt.  And his sad RV journey to his daughter's Denver wedding is just a trip on an interstate.  When he gets there, he desperately wants to stop the marriage, as his future son-in-law (hilariously portrayed by Delbert Mulroney) is a total a-hole.  The son-in-law's mom is a real winner too.  Kathy Bates plays her with an effortless aplomb -- a washed-out, New-Agey matron in hippie skirts, asking Schmidt what kind of a sex life he has.  Hope Davis is the daughter, and she has the mean, hard face of someone who has pushed feelings down so far inside that they have rooted to the ground.  She's stuck, but she can't say that aloud.  The major triumph of the film, the penultimate moment, isn't really dramatized through the African orphan letters, as much as at Schmidt's daughter's wedding reception.  When he's asked to say a little something about the couple, Schmidt gets up, is given the microphone, and he bites the bullet:  he blesses their union.  It's a moment of self sacrifice, painful and sad, but also somehow more telling than the words he sends to an anonymous African boy.  After the speech, Schmidt goes to the bathrooms and pees.  The look on his face as he urinates is heart-breaking.  He had to do what he just did, lie and smile, even though he feels it is the biggest failure of his life.  That's the wisdom nestled inside this remarkable sad and sweet film:  you have to lie sometimes just to be able to be in the lives of the people you love.
Posted by Keith at 10:13 AM No comments: 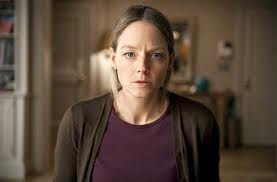 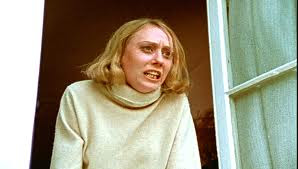 Roman Polanski's movie version of Yasmina Reza's play "God of Carnage" has a truncated title (just Carnage) and a cast of brilliant actors (John C. Reilly, Christoph Waltz, Kate Winslet, and Jodie Foster) hamming it up as New York City basket-cases getting hot and bothered because their elementary-school-aged sons got into a fight.  It's a tedious and gorgeous movie, like a trashy sitcom directed by Ingmar Bergman.  A claustrophobia sets in almost immediately, as we watch these four people act like complete and total idiots, with a gloss of philosophy and art-history added on to make the whole thing seem worth the trouble.  But what makes it worth watching for real is Jodie Foster.  It's like this is her Mommie Dearest moment (the 1981 Joan-Crawford dragshow that featured Faye Dunaway as the famous sadist/actress; Faye never seemed to recover).  Foster plays a politically-correct, sincere, creepy, shrill harpie that tows the party-line so hard she makes the word "community" sound like bullets shooting out of a gun.  It totally feels like she's channeling Mink Stole's Peggy Gravel all the way through.  Peggy Gravel is the main character in John Waters' 1977 masterpiece Desperate Living, and in that movie Stole inhabits Peggy's psyche with a psychotic ferocity close to demon possession.  As in all of Waters' movies, the characters mostly speak in hyperbolic hilarious monologues.  Peggy in Desperate Living is always screeching about unfairness and crime and how she does not deserve the world she is living in.  And Foster's Penelope Longstreet is in the same boat in Carnage.  The shrillness is comic and hyperbolic, but the joke is very, very thin, as is the plot, which runs along the lines of Waiting for Godot with a little Who's Afraid of Virginia Wolf tossed in for good measure.  Polanski has made a John Waters' movie out of scraps from a Woody Allen one.  It is delightfully stupid and probably a truly bad movie, but incredibly watchable like a dining room fuss in Mob Wives:  pure camp, without any redeeming values.  What's better than that?
Posted by Keith at 9:44 AM 2 comments: 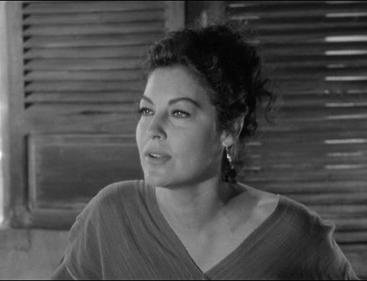 Tennessee Williams' The Night of the Iguana is a heady experience.  Directed by John Huston and filmed (in 1964) in lush black and white, it's one of those movies that teeters toward bad but then somehow snaps back to genius almost in every scene.  But the most beautiful, exotic, startling aspect of Iguana isn't Tennessee's verbiage or Huston's camera angles, or even Richard Burton's deft hamminess as a desperate defrocked minister...  It's Ava Gardner as Maxine Faulk, owner of the last hotel on Earth.  Her performance is not a performance as much as a plea for mercy and a poetic rendering of hurt, desire, and vulnerability.  You want to crawl up next to her like a cat, try to comfort her and also bask in her fire.  No one has ever come across this way on film for me.  Just seeing her on screen, messy and gorgeous and sweet, foul-mouthed, offering anybody within ear's reach a cocktail, talking about how much she needs to be loved, is a revelation somehow.  It makes you understand that movie acting is somehow more about breathing and being than anything else.  Just her presence conjures feelings, the way she opens her mouth, the way she pushes herself into people.  Gardner's Maxine is a force of nature.  In an almost-campy movie filled with over-the-top metaphors, Gardner becomes the movie's soul, haunting every moment she's in.
Posted by Keith at 9:35 PM No comments: 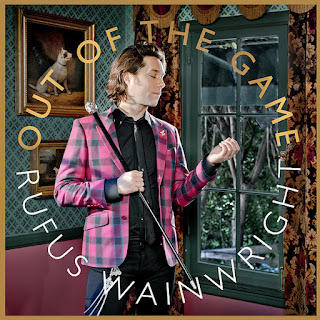 I used to read Anne Sexton poems all the damn time when I was working my way through college.  At work on break, between classes, in the library instead of studying 18th century European history.  Anne Sexton was a kick in the ass, mouthy and truthful and glamorous, but not as uptight as Sylvia or Adrienne.  She was a reason to write.  Very urgent, Anne was, and sneaky, and kind of gossipy and sloppy, but also her poems felt finished and vital.  She got into my head and I loved her for it.  Her poems have a confessional flirtatiousness, but also are sort of randy and wild-assed and voluptuously silly.  "Imagine it," she writes in Music Swims Back to Me, "a radio playing and everyone here is crazy."  Her poetic voice and product were high-art and low-art blossoming into a new art.  I loved her because she was the proto-Courtney-Love, the weird loud bitch at a party that somehow gets crystallized and elevated into a grandeur beyond parties and bitchiness.  I feel the same way about Rufus Wainwright.  He is the neo-Anne-Sexton.  And his new album, produced by Mark Ronson, is a gem, crazy and tight, full of confessions and yet smart enough to get the joke.  I keep going back to a song on Out of the Game called "Rashida," in which Rufus laments about being uninvited to a big party and yet thankful he was not invited because he was able to write a song because of it.  Like Anne Sexton's poetry, his songs somehow create a space where both gratitude and arrogance roam free.  This is a collection of songs that make you want to be able to sing.  Catchy but deep, sad but ecstatic.  Knowing.

It's the music Anne Sexton's radio was playing in the crazy place.

Labels: Anne Sexton, Out of the Game, Rufus Wainwright 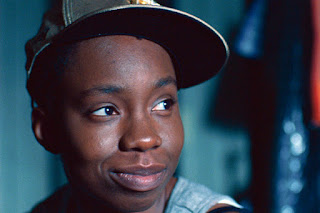 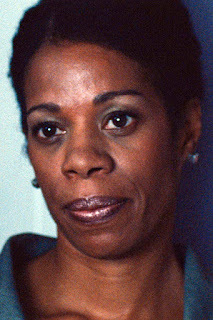 Dee Rees' Pariah is an incredibly graceful, sophisticated and warmhearted depiction of the horrors of being completely outside of where people think you should be, and then finding a way to make whatever you can work for you.  Adepero Oduye plays Alike, the main character, a high school girl with a secret.  And yes I know how stupid that sounds.  Oh yeah:  she's African American too.  All this "otherness" and melodrama could come off like propagandists trying too hard to shove Homophobic White America! in your face.  But in all actuality there's nothing exotic or melodramatic about Oduye's "pariah."  To Rees' credit, this movie is as simple and earth-bound and clear-eyed as a Wanda Sykes monolog.  Oduye gives the main character an innocence and knowingness that makes political-correctness melt away.  She can look you in the eye and let you know she is what she is so please fuck off.  And while that may sound kind of goofy and strident, this movie has such a refreshingly light touch it reminded me of My So-Called Life, the TV show that showcased Claire Danes as a goofy, sweet sort of "outcast" back in 1994.  Pariah focuses on a true outcast, and yet has that same warm hour-long drama shimmer and delight, that same sort of glamorous hurt.  You want to crawl up next to Oduye in this movie -- she is so perfect and beautiful and heroic.  And Kim Wayans as her crazy-assed mom really delivers a performance that contrasts perfectly with Oduye's.  Wayans is shrill and terrified, Oduye hurt but always looking forward.  Charles Purnell completes the trifecta as the cop/dad, authoritative but loving.  I love this movie.  It makes "outsiderness" disappear without losing track of what it does to people. ﻿