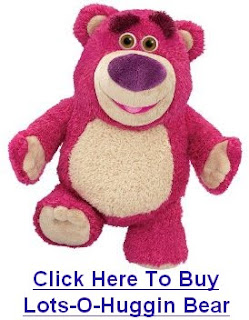 Toy Story 3's evil villain is a pink teddy-bear with a lavender nose who smells like strawberries and has the deep-pitched, soft-toned, hillbilly-kind voice of a patriotic country singer telling you how great the world is, just the way it is. This toy's name is Lots-O'-Huggin Bear, and he rules in a benevolent/malevolent manner, bullying the other toys in the Toy Story 3 menagerie into "getting with the program," once they are abandoned by their owner Andy, who is off to college and possibly too grown-up to care.

Toy Story 3's triumph is not just the technical 3-D slights of hand, or the even more important spinning-plates feat of maintaining nostalgia while also deepening the feeling for its initial characters (first unveiled in 1995) -- what truly makes this movie a classic for me is its sweetly satiric but deadeyed depiction of what it means to be institutionalized, and how the brutality and numbness of institutionalization gets sewn into the everyday fabric of just being a part of things.

The institution in this case is a daycare center where Woody, Buzz and the rest of the ragtag Toy cast are marooned after being accidentally donated. At first, all the toys are happy to be able to be "played with" by a new generation of kids, but soon they are confronted with reality: they are merely actual playthings at the hands of kids too young (and too sadistic) to be their "owners." The daycare center, you see, has its own hierarchy managed by that strawberry-smelling dictator Lots-O'-Huggin Bear and his hench-toys, chief among them a docile but eerie abandoned babydoll named Big Baby. The structure of the institution is administrated by Lots-O, and policed by Big Baby, Ken doll, and and other assorted misfit toys whose chief mission is to maintain the order of the place.

This is a candycolored retelling of One Flew over the Cuckoo's Nest in many ways, but in the end Woody and the gang somehow survive by escaping the Lots-O'-ruled universe and persevering even beyond the Holocaust-tinged fiery oven of the local dump. Lots-O, in the end, is defeated, but there's a strange afterglow the movie leaves (at least with me) because it seems not to be just an entertainment, but a sort of comment on what it means to be someone cast aside by society and yet still very much alive and willing to be in the world, and to somehow be optimistic about that status. Toy Story 3's main message is don't listen to the pink teddybear voice inside your head, the one whispering Kenny-Chesney-sincere to go with the flow, to be happy with what you have to the point that you are being pulled apart and eventually thrown away.

That's institutionalization, right? Being assigned an identity and then having to live out that narrative in a small concise space until you either give up, die or escape. Lots-O's agenda is to keep the status-quo, and in order to do that he needs to know that he is right, so he maintains that story for himself by being "sweet" and "kind" and authoritative. He knows what's best because (as the movie so deftly dramatizes in a flashback sequence that seems to be directed by David Lynch) he himself was abandoned back in the day and replaced by a replica: the image of Lot-O standing outside the window of his once owner while she cuddles with another "Lots-O" allows us into the mindset of a dictator. He has lost everything and has to confront how worthless he is; instead of allowing that information to widen his scope Lots-O uses that energy to create a toy-prison and to incarcerate and indoctrinate.

In the movie, after Lots-O is defeated, Woody and the gang are rescued and given sanctuary in the home of a little girl named Bonnie. They escape the institution, but of course are still servants, still at the whim of an owner. But at this point it's understood somehow: you make what you can out of what life has given you. But within that process of acquiescence you must never forget you can escape to a better world if you have to. Toy Story 3's genius comes from a weird, sobering social realism merged with the shiny-clean comfort of its animation. Woody and Buzz and all the other toys don't let themselves get thrown away. And they never pledge allegiance to the pink teddybear.

Words to live by.

So what does this have to do with Thunder-Sky, Inc. or 2 + 2 = 5? Raymond never fell into the institutional narrative: he was always writing his own story, and didn't listen to or obey other voices. The logic of 2 + 2 = 5 is illogic: collaboration among all kinds of artists and people without anyone in charge eventually becomes a new way to organize.
Posted by Keith at 7:31 AM No comments:

"Drawing Always Was His Only Way of Talking" 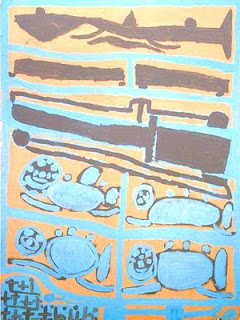 "Kevin White: Untouched" at PAC Gallery in Walnut Hills is a big and bountiful exhibit, as if the curators were surveying a lifelong career, not just the outpourings of the last year or so. But Kevin is like that. He produces a lifelong career's worth of art weekly, sometimes daily. Curating all that art is complicated because his output can be pigeonholed under "Outsider Art." Kevin has Down syndrome, which may or may not be one of the reasons he is such a genius. I would probably place my money on the idea that it isn't the reason. I think Kevin was born an artist, and the Down syndrome thing was something he's had to deal with to let the art part of himself get recognized. "Untouched" is a great step forward in helping Kevin to break out of this trap.

I met Kevin nine years ago, when he was attending a sheltered workshop for people with developmental disabilities and getting into trouble for drawing when he was supposed to be doing piece-work. Creativity was just leaking out of him in a haze of drawings on paper-towels and napkins and Arby's receipts: odd and delirious configurations of animals and machinery, landscapes and Utopias, monster trucks and angelic onions. His oeuvre was like a portfolio from some unknown European Surrealist from the 1920s, lines murmuring and retracing themselves into dreamy chandeliers made from bones and fur and broken radios. I could go on. What Kevin does is evoke a world by drawing a line. He can do that with a Bic pen or high-quality acrylic paint, on canvas or a thrown-away piece of cardboard.

At the time when I first met Kevin, Bill and I were pulling together the initial stages of Visionaries & Voices, and Kevin was the first artist to attend the day program five days a week. Time well-spent, and it still is, nine years later. "Untouched" is wonderful proof of that. In almost every painting and drawing in the show Kevin is dramatizing some really bizarre and poignant biological struggles. Nature and nurture are often in conflict, and like Alfred Hitchcock Kevin seems to delight in the cruel hilarity. Check out the painting above from "Untouched," not a great photo I know but still... It has a structure and meanness to it, with its cuteness still intact, but waiting in the wings? Black little winged machines ready to read your mind. You get the picture: Kevin is not an innocent. He has some truths to tell, albeit coded and concealed in a visual language we will never quite figure out Thank God. That's just the way the world works: mystery conceals meaning, but meaning still has a voice, like someone yelling from inside a car-trunk. Kevin's sophistication emerges from the way he arranges and manages that meaning and mystery in each work.

The hardest part in curating a Kevin show is delivering Kevin's art to the world while being true to its roots. These works are the musings and experiments of a vital working artist with something contemporary and just plain weird to tell you. Kevin is a genius. I believe that. But I don't think that genius has anything to do with his "disability" or his "outsider" status. Again, "Untouched" provides a catalog of evidence to support this assertion. In fact, if you were to stumble upon this exhibit not knowing Kevin or his biography, you would just simply witness the the work of a prolific artist interested in the high-style clashings of dream and machine, animal and robot, vegetable and virus.

What Gertrude Stein writes in her memoir about Picasso rings true of Kevin: "He was born making drawings, not the drawings of a child but the drawings of a painter. His drawings were not of things seen but of things expressed; in short they were words for him and drawing always was his only way of talking and he talks a great deal."

Thanks to everyone who had anything to do with "Kevin White: Untouched." It's the next step on his journey to becoming what he needs to be.
Posted by Keith at 2:07 PM No comments: