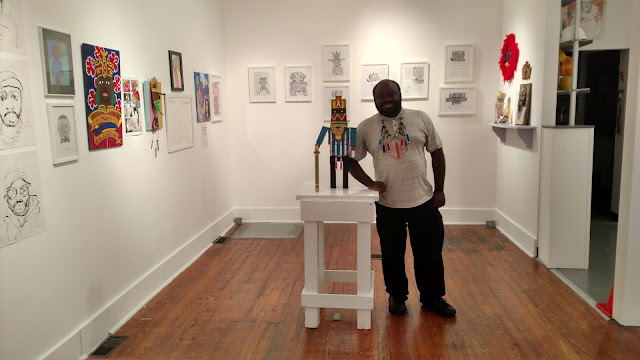 I've known Antonio Adams for a long time, since 2000, when he was just out of high school. Back then he was a shy, skinny excavator of his own imagination, building robots, cats, humans, and other things out of whatever was around (wood, cereal boxes, construction-paper, sticks, glue). He had a huge kingdom of them in his bedroom back then, and Bill and I were able to help him show some of them in galleries around town. He also could draw and paint, and do so with great and effortless panache and sophistication. He maintained and still maintains a strict but breezy and voluminous output of art. He works constantly, but he never sweats it, always creating toward a kind of peaceful equanimity and aesthetic. A gut-level but brainy sense of absurdity and humor balances everything he does in his works, in his life and in his mind.

In short he's a working-class genius.

I don't toss around the word "genius" too much, so hang with me. Usually that kind of hyperbole creeps me out. But I really mean it with Antonio. He is a "genius," not in any "savant" or sentimentalized kind of way, but in a grass-roots, fantastically everyday manner. He's found a way to live that suits him and allows him to rise above a lot of crap that gets thrown at him, including a devastating house-fire in 2008 and the violent death of his brother in 2014. During those crises (and many others) he simply takes it all in, feels all the emotions he needs to feel very deeply, and then systematically turns his reactions into art. That's his practice and his salvation.

So now, in 2017, when not bussing tables at Frisch's, he's usually out and about on the city bus, showing up at art openings around town, hanging out at Thunder-Sky, Inc. (his headquarters) and making whatever he deems necessary in the basement there. He has figured it out in a way that's not heroic or showy -- just work-a-day, his brilliance often camouflaged in routine and straightforwardness. He does what he does without fuss. What he produces makes me smile and often feel awestruck because it all seems to come from a delicate and yet extremely powerful place. And it comes naturally from a reservoir of love, compassion, and intelligence.

Last night we installed a show at Thunder-Sky, Inc. that is dedicated to that place.  "The Master of Loyalty Is in the Gallery Tonight:  Art about Antonio Adams" is a show being curated by Lindsey Whittle, and exhibits works about Antonio by artists who know and love him like I do. It was a pleasure to see these folks' responses to Antonio's ability to pull people together, to feel that kind of love for him. In the photo above, he's standing in the middle of the gallery, surrounded by all that love, and it totally reminds me of those first few moments when I came to know him back in 2000: Antonio in his bedroom, surrounded by that army of cat sculptures, as though he was simultaneously in the real world and inside his own head. Now he is in an art gallery being celebrated.

It's been a beautiful journey with him, from those first art shows in the early 2000s to starting and helping to sustain Visionaries + Voices throughout the rest of that decade, to opening Thunder-Sky, Inc. in 2009, to now.

Without him, there would have been none of this I don't think. 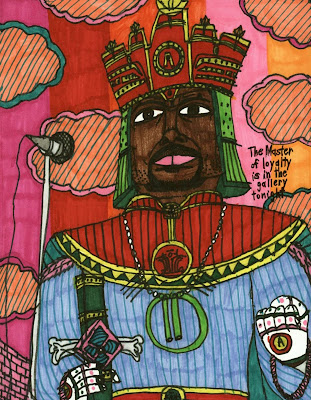