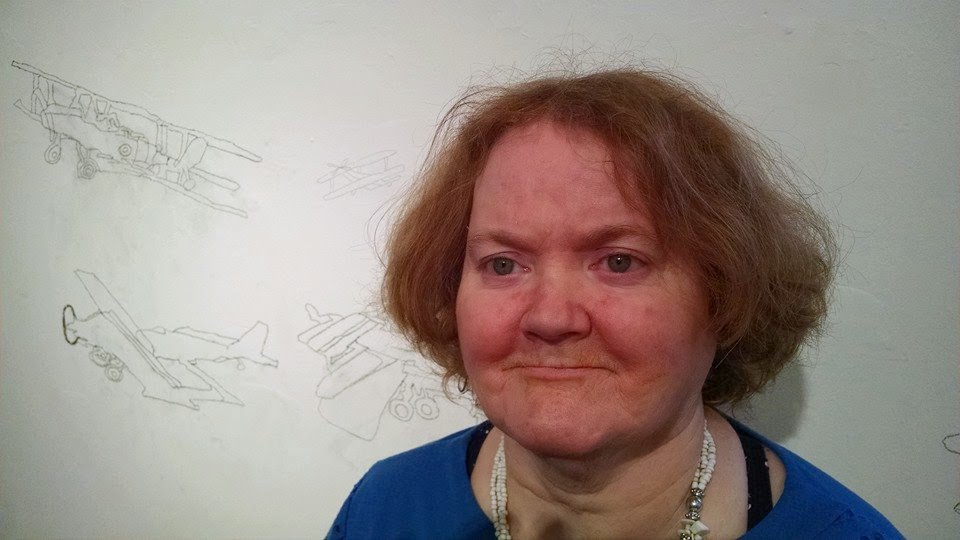 "Now Here:  Theoretical Landscapes" is a show currently up at the Carnegie in Covington, Kentucky, curated by Matt Distel.  It opened on Friday, and I'm telling you what, it was a blast, lots of people, lots of art...  Just great.  Matt pulled together such a disparate collection of works that it's hard to figure out what makes the show so fantastic, outside of the fact that the inclusiveness inherent in the curatorial decisions expands ideas instead of claiming them.  "Theoretical" and "landscapes" are both loaded little terms that could have backfired pretty easily.  They evoke a starchiness somehow, a staid attention to what "art" is supposed to be, and yet every choice Matt makes in "Now Here" overturns that sense of preciousness.  It's a 6- or 7-ring circus, this show, and in a totally good way.  (One of the highlights, of course from my POV, is Bill's suite of Alice-inspired works/collaborations with Meddling with Nature's Jeremy Johnson, Sharon Butler and Bob Scheadler, a horrifyingly joyous set-piece comprised of his Technicolor paintings, a dead dryer, dead leaves and dead animals that comes off like a fever-dream/nightmare but also invokes the sad innocence of abandoned amusement parks.)
Matt has created a weirdly cohesive, poetic plurality in "Now Here" by assembling all these artists and all these works made from every media you could think of (including duct-tape, the aforementioned taxidermy, cardboard, and cement, just to name a few, as well as the old oil and acrylic standbys), and when you walk through the whole shebang you feel as if your brain-space is being expanded so that all this cool stuff can get in.  Then you remember the topic (landscapes, theory, the now and the here) and you get the joke, while also understanding the serious and beautiful punch-line each piece evokes.  It's like Matt is taking you on a hot-air balloon ride over a little subdivision called The Land of Art, effortlessly educational, a little elevated, but totally storybook sweet, even while grounded in exactly what it is.
And speaking of sweet, at least for me, I got to hang out with Kathy Brannigan, one of the artists (along with Krista Gregory and Jamie Muenzer) who were a part of a wall drawing escapade that truly feels magically delicious.  Kathy's drawings of airplanes and spaceships anchor the exercise, beautifully smudged graphite depictions that somehow feel both nervous and stately, like doodles done in a boardroom.  Glitter and geometric flourishes play back-up singers to these intimate aerospace drawings.  Somehow the whole enterprise feels like a microcosm of the rest of the show:  astute, wide open, frenetic, but also friendly, aligned, and just plain pretty.  Kathy (pictured above next to some of her graphite hieroglyphics) was one of the first artists Bill and I ran across when we started pulling together Visionaries + Voices years back, and she still hangs out there, but Friday night she was a part of a whole new landscape:  an astronaut finding a wonderfully temporary home.
﻿ 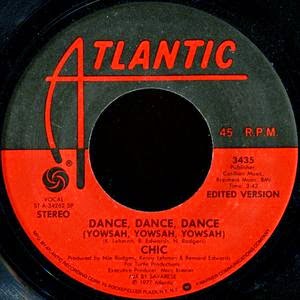 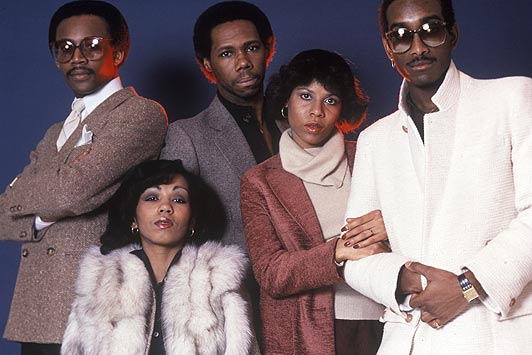 At the end of the day, I don't think I can love pop music more than I love Chic's oeuvre, circa late 70s, when disco was booming and then when disco was chased down and stomped on in a baseball stadium, rolled over by steamrollers, set on fire, etcetera, etcetera, etcetera.  Remember those idiots in back in day at Comiskey Park in Chicago?  "Disco sucks" t-shirts and a racist/homophobic nastiness thinly veiled in pride of country, pride of Bob Seger.  In fact, one of Chic's most significant and ferocious hits, "Good Times," made it to Number One during that whole bull-shit "Disco Sucks" era.  The power of that song, and all the songs Chic produced and played from 1976 (when Nile Rogers and Bernard Edwards first formed the band) to 1980, comes from an intentional hard-won joy that bursts forth and hardens into silvery passion.  Their songs ARE the dance-floor, the lights, the satiny clothes and smoky eyes, the extravagant furs and jewels and high heels.  The attitude and the sophistication comes from a spied-on elegance inside each song, a knowingness that glamor is a planet you'll never get to, but it sure is fun pretending you are already there.  Take, for example, "Dance, Dance, Dance (Yowsah, Yowsah, Yowsah)," a song so infectious and crazy-happy you can't help but understand what it means to lose it all in the name of having a good time; that is the key to all their music actually, a strange glorious abandon constructed on top of reality, so buoyant and skillfully manufactured you can get rid of all else.  "Dance, Dance, Dance" was one of the first singles I ever bought, and I listened to that thing in my little white-trash nowhere bedroom over and over, trying to figure out all kinds of things, and yet also that song is a lullaby to people like me (like us), star-gazers, freaks, feelers of deep feelings and yet also in on a joke we just can't explain, can't find the punch-line to.  Chic uncovers that secret but the secret is simply three words, followed by three words in parentheses:  "Dance" to the third power, and "Yowsah" to the third power as well.  "Yowsah," by the way, means "wow."
From 1978 (the year I turned 13), "Le Freak" spilled forth like an angry anthem, which it was.  Grace Jones invited Nile Rogers and Bernard Edwards to Studio 54 one night, and the pissy little disco-gatekeepers would not let them in.  So they went back to their apartment and banged out a tune with the refrain "Fuck off."  To be more radio-friendly, they capsized the cursing and came up with the Frenchified "Le Freak."  Still you can feel a punkishness inside that disco swell, a pissed-off grandeur that outshines itself to the point you can feel yourself dancing and stomping until both become the same thing:   love and hate combine into a new and gorgeous enterprise.
That's Chic's true legacy, that sense of transcending the world through disco and at the same time understanding the predicament of never being able to escape who you are and what the world can do to you.  What they accomplished in a few years echoed in all kinds of ways musically, including Nile-Rogers-produced epics by David Bowie, Madonna, B-52s, and so on, but also I think they were instrumental in developing an attitude inside cultures that thrive outside of the Main One.  Their music, joyful and polished and honed to glitter and a little guile, powered by a knowingness and worldliness, has survived because it needed to, a soundtrack to all kinds of struggles never mentioned but completely and truly felt.
Posted by Keith at 11:27 AM No comments:

Help Me I Think I'm Falling 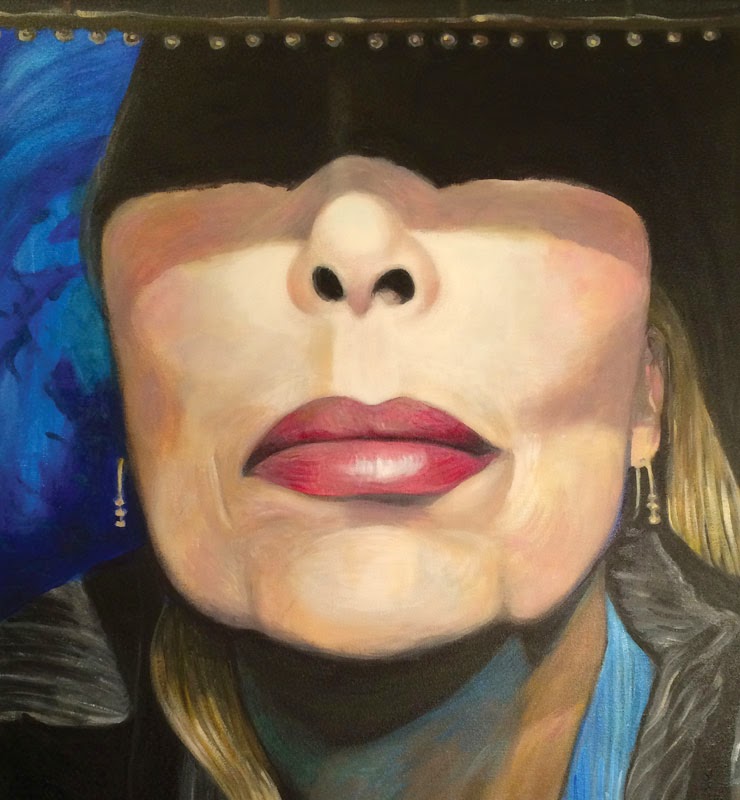 A few weeks back on a snowy Saturday afternoon Bill and I had a cocktail or two and listened to Joni Mitchell's Love Has Many Faces, a compilation of her music fashioned into a quartet of CDs.  Each suite of songs, or "acts," as she calls them, is titled and juxtaposes songs from all of the albums she's ever made.  It was a breathtaking experience.  Snow deepening, Joni's voice traveling through time, and a little vodka to wash it into perspective:  Joni from the early 70s, trilling and silvery and triumphant, melodic to the point of otherworldliness, all the way through the late 70s and 80s, when she's getting world-weary and the voice is thickening, turning plush, cigarette-jazzy, to the two albums she did in 2000 and 2002 in which she covers classic pop tunes, along with many of her own, backed up by a lush orchestra, the voice voluptuously what it is, husky, full, ready to dream.  There's no reason to the way she pulls songs side by side, except in her own head, which makes the whole endeavor beautifully random and yet somehow super-concentrated and very, very pleasurable.  You're inside Joni Mitchell's mind, feeling her feelings, and also basking in her glow, a light so warm and brilliant you're kind of in the presence of a god, or goddess, or whatever.  It's the music, though, that sends it all the way over:  subtle and rich and blatant when it needs to be, and the words, chronicling her love of travel and shady men and all the friends and family she leaves behind on many hejiras, only to feel more connected with them once she makes the split.  You need to hear all 4 quartets to really get it, as well.  There's a hardback book housing the CDs, with a long, personal essay by Joni that is self-indulgent and kind of silly, just the way it should be.  She goes through the list of songs one by one, explaining their meaning and polish and joy, but all you really need is the songs, and I think she knows that.  She has to.  Almost 50 years of making music has given Joni a luster and a swagger you can't make up, only earn.  She's the ying to Dylan's yang.  And Love Has Many Faces is a Bible for anybody who yearns to examine what it all means and what it does to you when you realize you can't figure it out.
﻿