The Imagination Is Not Our Escape Six Degrees of Separation has been haunting my thoughts since I showed it in a disability studies class I'm teaching about alliances and advocacy involving people with and without disabilities.  I wrote a post about the movie a few weeks ago ("Just Fill in the Names"), but now I've read the papers the students in the class wrote about the movie, and I feel inspired.  While not explicitly about disability, Six Degrees focuses on the complicated and emotional relationships forged when people from completely separate cultural and socioeconomic worlds decide to make an alliance.  It's rough stuff.  In the movie, Paul (Will Smith), the African American, gay, homeless kid starving for upscale approval and connection, and Ouisa (Stockard Channing), the rich socialite who loves him and sees his worth despite the circumstances of their meeting, represent two forces coming together and changing one another in ways they could never have foreseen before their collision.  It's life-changing, for everyone involved.

Here's what some of the students wrote:

"The main character in this film, Ouisa, works for justice because she is willing to look outside of the boundaries and lines that her class of people creates and is willing to accept someone who was not born into a life of privilege...  In the film it is evident that she has developed a deep emotional bond with Paul, and is proud of the work he has done to better himself.  She does not feel he should be punished for lying about his identity because she knows that had he not constructed a fake story to get into their lives, they never would have allowed him the chance, and I think that she admires his bravery and commitment in that regard."

"Regardless of the way Paul has taken advantage of them, they still agree to help him.  This is a true portrayal of an ally -- they overlook Paul's flaws and realize he is just a boy who needs help."

"Six Degrees tells the story of how easily alliances can be made; however it also shows how easily they can vanish."

"Ouisa doesn't fully transcend the boundaries of her upper-class lifestyle until the very end of the movie when she ultimately and fully rejects the society and the imagination-starved life she had been living.  The fact like Paul was black and homeless is perhaps what kept the alliance between Paul and Ouisa alive for as long as it was.  He was the opposite of what she symbolized, and this enabled her to enter an opposite world by connecting to him.  Ouisa was a controlled person before she met Paul.  Paul completely turned Ouisa's life into chaos.  However, chaos is not always a negative experience.  What comes from chaos is often a rebirth, an invigoration."

"Paul stated in the movie, 'The imagination is not our escape.  On the contrary, the imagination is the place we are all trying to get to.'  He wanted people to expand their stereotypes and prejudices and see others not for their color, sexuality or class." 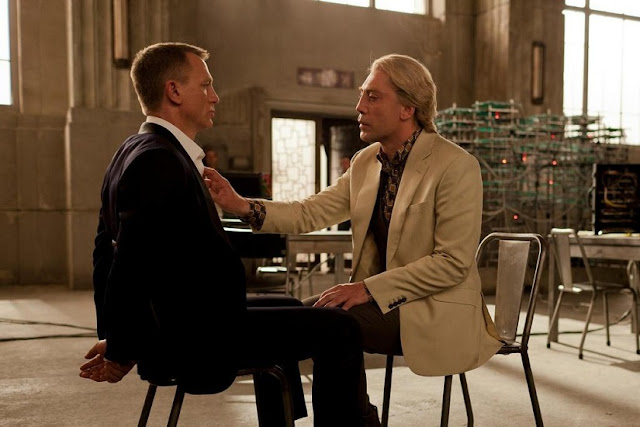 Skyfall, the new James Bond film, is exhilarating to watch to the point you forget it's a total retread.  The whole purpose of Bond movies now, of course, is aggrandizing deja vu, finding pleasure in reinventing what has been reinvented to the point it's no longer cliche, just a kind of movie-movie shorthand.  Skyfall is one of the best examples of taking formula and reformulating it to create a little shock to spice up nostalgia.  And its first five or six minutes are probably one of the best action-picture sequences in the history of movies:  car crashes, motorcycles zooming over roofs, a speeding train with two men fighting atop it.  It's an old-school triumph of style over logic.  The ending, as well, has an early-90s independent-movie vibe to go along with its crashing helicopters and armed groups of bald mustached men.  It takes place in a small Scottish church, and delivers a dramatic punch in the gut that evens has tears rolling down 007's cheeks.

Daniel Craig plays Bond as if he is in a trance, all blue-eyed soullessness, his anger engineered to create simple solutions to very complicated problems.  And Judi Dench, as M, is so beautifully understated in her portrayal of power-hunger and regret, she practically steals the show.

One part of the retread pleasure that doesn't work for me is Javier Bardem's supervillain, Silva.  Bardem is an incredible ham, and it is always a joy to watch him ham it up, but in Skyfall the character does not deserve such deliberation and vigor.  Silva is a one-note psycho, and is particularly sad because of the way the screenwriters define him:  he is disfigured from a botched suicide attempt, and that disfigurement becomes the reason he is what he is, that disability defining him.  He also has dyed blond hair and eyebrows, and a sort of proto-effeminacy that borders on camp:  a guttural, grotesque prissiness that makes it seem like Silva's insatiable villainy is unspooling from Silva's "monstrous" (at least in the moral code of the Bond movies) sexuality.  In one of the first scenes between Bond and Silva, Bardem plays Silva like a catty homo happy to be indulging in a little kink.  With Mr. Bond helpless, strapped to a chair, Silva opens Bond's shirt and licks his lips and it's awkward not because of the gay vibe as much as what the gay vibe is being used for:  to define good and evil.  It's a quick way to divide the universe.

Even when you indulge in retreading a retread after 50 years of service, you still need to rethink the villainy just as much as the heroism.  Isn't there a way to create "evil" without making it feel like gay-bashing?  Can a villain not have a facial disfigurement and still be evil?
Posted by Keith at 10:28 AM No comments:

Just Fill in the Names

I read somewhere that everybody on this planet is separated by only six other people. Six degrees of separation between us and everyone else on this planet. The President of the United States, a gondolier in Venice, just fill in the names. I find it A) extremely comforting that we're so close, and B) like Chinese water torture that we're so close because you have to find the right six people to make the right connection... I am bound to everyone on this planet by a trail of six people.

Ouisa Kittredge in Six Degree of Separation, a play and screenplay written by John Guare 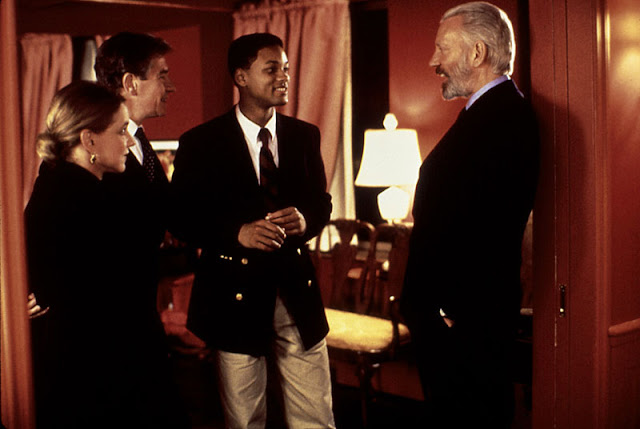 ﻿
I've blogged a few other times about the Disabilities Studies class I'm teaching this semester at Miami U.  It's titled, "(Dis)Ability Allies:  Making It Work," and basically we've been trying as a class to figure out how authentic, effective, meaningful relationships among people with and without disabilities happen, and once we figure out how they happen -- how we can ensure these alliances provide ways to address social injustices, including decolonizing people who have often been relegated to institutions, both logistical and cultural.

In trying to come up with unique and fresh texts to talk about along those lines, I remembered a movie that came out almost 20 years ago that is completely about how human relationships can change the course of people's lives irrevocably, and how hard and gut-wrenching that process is.  Six Degrees of Separation, written by John Guare and directed by Fred Schepisi, tells the true story of a homeless, gay, African American man who conned his way into the homes of the upper-classes in New York City during the early 80s by claiming he was the son of Sidney Poitier.  The story centers around that man, named Paul, and one of the people he connected with, Ouisa Kittredge, the wife of an art-dealer with children at Harvard and Groton.  Ouisa, in the film, is played by Stockard Channing, and Paul by Will Smith.  Paul and Ouisa make an alliance despite the fractured, fraudulent way they meet, and through the course of the film that connection pulls Ouisa away from her comfortable life of nights at the opera, upscale fundraisers, and champagne luncheons.  She actually feels a maternal impulse toward Paul, and Paul finds succoring shelter in her presence.

They make an odd, and oddly poignant couple, and as Ouisa realizes that she may have more in common with Paul than she does her own children, husband and society, she starts to disconnect from that world.  Finally, in a penultimate scene, during a stylish brunch peopled with the cream of the crop of Manhattan culture, Ouisa loses it.  By this time, Paul has been found and arrested and he has disappeared into the prison system.  By this time, as well, Flan, Ouisa's husband, has used the Story of Paul as a way to aggrandize himself and his status; their relationship with Paul is now a piece in the New York Times about how the Kittredges were bamboozled because they were so kind and openhearted and gullible.

Ouisa wants to correct this narrative.  She has made an authentic alliance with someone so alien to her existence she does not want him to become an anecdote.  At that elegant starchy affair Ouisa tells the crowd that she loves Paul.  It shocks the room.  She ends up stomping off, eventually separating not only from her husband, but from the world they have always occupied together.  Her connection to Paul is both freeing and terrifying, in that it rips away the restraints and manners of charity and replaces it with actual empathy, a state of grace that does not allow for sentimentality.

That alliance between Paul and Ouisa never comes to full fruition in the movie.  In fact, it is thwarted.  But that's not important.  Ouisa's desire to go beyond charity, as the privileged person in the relationship, is what the movie is about, and what possibly will spur her on to make changes in her own, and in other people's lives that have meaningful ramifications.  It takes someone who has power and connections and resources to help people like Paul break out of the colonization that has always kept people like Ouisa and Flan feeling safe and secure.  Ouisa abdicates her power in order to love Paul.  In other words, being an ally to people normally shut out of the conversation (people with disabilities included) is not a touchy-feely exercise.  It is often about sacrifices you never intended to make, but have to in order to stay sane.

Here are the questions I asked the class to answer in order to draft a short paper...

How does the film deal with alliance issues?

• Stigmatized by association with marginalized

• Dismissed by majority for giving up privilege

How does, or does not, the main character:


How do Class and Race factor into making, and sustaining, alliances in the film?

I'll be reading their papers this weekend and will share some of what they've written here on the blog soon...