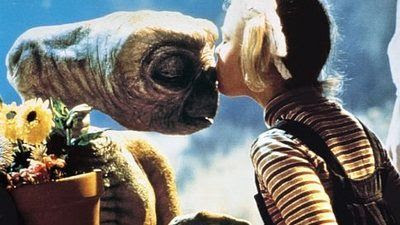 Sometimes you just have to marvel at things.  "Things" is a stupid word, but it works here because it is so wide-open and meaningless/meaningful and dull that it encapsulates the whole stinking universe while also shrinking the whole shebang into just 6 reliable letters.

I guess you could call ET a thing.  He was a puppet turned into an intense reality on the big screen in 1982, when I was 17, and living in a small Midwestern town, feeling lost and disjointed, floating from school to a part-time job to home to wherever else I needed to go.  No direction outside of what I kept seeing in my head, dreams about not knowing, dreams about leaving, dreams about the terrors of leaving, dreams about being a star.  I knew I was what I was:  lower-class/working-class and gay and weird and excited to be alive but also scared of letting people know any or all of that.  I also did not feel like I could connect to an identity that accommodated those crossed signals.  In short I felt like ET, a puppet and a real thing, lost in a world he was only supposed to be visiting.

That movie.  That thing.

Flash-forward to 35 years later.  I'm 52, living in a bigger Midwestern town with Bill, working a job I like, trying to write stories and a novel, running a little non-profit gallery, and so on.  ET comes out in a 35th Anniversary edition on the big-screen thanks to TMC.  We go.  I watch, and it all, as they say, comes flooding back:  that feeling of being lost/sad/excited. I realize that Spielberg created a existential security-blanket, not a movie, a sense-memory, not a blockbuster.  It is a puppet-show from a dream you have when you're small and sweet and innocent, and when I was 17 it made me lose it.  I was bawling my eyes out at the textures Spielberg found, that foggy dark night gleaming inside itself with window-light and moon-light and a kind of suburban night-light sorrow you can't really describe, a yearning cut through with love and hurt and above all a sort of kindness.  Pure kindness really, as if some beneficent imagination was fitted with a golden spigot and out flows those colors, those sentiments, those images, those moments.

ET has a plot, of course, about a spaceman coming to earth and getting lost and then finding solace and safety by following a trail of Reece's Pieces through the forest; it's also a coming-of-age gig too, with Elliott figuring out how to let go while also maintaining hope and wonder.  It's about a divorced mom trying to maintain sanity in the shadow of her husband who has just abandoned her and her three kids.  It's about a team of kids riding bikes around the neighborhood in order to save the universe.  It's about a little girl named Gertie who is told, at the end of the movie, to just "Be good" by the creepy/sweet stuffed-toy that fell from the sky and into her bedroom closet.

Watching it at 52 I reconnected to not necessarily my youth because I don't think I want to reconnect, but to a spirit of escape and return to that pure bliss most movies can't manufacture or even hint at. ET is a cornucopia of compassion, weirdness, hope.

And then the credits roll, and I remember me and my mom and my little sister getting up from our velvet-lined seats in the old State Movie Theatre in downtown Anderson, Indiana (a plush, old-school cinema that had seen better days, with fake-Greek sculptures lining the walls and a black-painted stucco ceiling speckled with electric-light stars, and that musty cool smell of better days staying on your clothes even after you leave), the three of us walking out into late-day summer sunlight, my face red and my eyes still pouring, and next door is a little Chinese restaurant we always went to, just like 5 or 6 booths, red-and-black decor, a Chinese family owned it, and the mother took the orders, the kids bussed the tables, the dad made the food, and me and my mom and my little sister sit down and I'm still crying, can't stop because of what I just saw, that stupid movie giving me a sort of traumatic sense of joy, and finally I stop and I laugh and I think by that time mom and sister are laughing at me too, and I order egg-drop soup, I always did there, and here it comes, somehow the same color as some of the light in ET, lush yellow, with flickers of white, you make this soup by boiling chicken broth and then dropping an egg in and stirring it real fast and it kind of explodes and cooks and turns into this creaminess, and I remember sipping that and recovering from crying so hard, and right then it was one of the best feelings in the world.
Posted by Keith at 12:37 PM