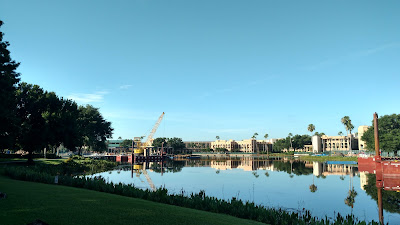 It's been a weird few days.  Good and bad and dreamy and awful and great.  I'm in Orlando, Florida, at a fantastic conference (APSE 2018 National Conference) focusing on how to support people with disabilities to have lives like anybody else on earth;  jobs, friends, places to live, ways to contribute, ways to survive.  It's been lovely to be surrounded by that kind of energy, and to be in rooms with people who are talking passionately about positive but pragmatic solutions, ideas, and concerns.  It's like I can breath.  I took so many notes I don't have any paper left.

One of the biggest concerns:  the government.  Of course.  What I'll call Trump-nesia, which is the current administration's obsessive need to wipe away everything that was ever accomplished legislatively and otherwise between the years 2009 to 2016.

Trumps's greed to deregulate, in the context of what I'm writing about right now, is about cancelling out major moves forward in the civil rights battle for people with disabilities.  Executive Order 13771, signed off on in January 2017, (here it is in all its glory:  13771) orders cabinet officials to cut away basically whatever regulations they want to, but in the way this has been implemented of course it's all about drawing a big red line through "OBAMA."  So everyone knows who's boss now.

And that intense hatred has allowed a lot of the federal civil-rights-based laws and guidance for people with disabilities to be jeopardized, especially around the subject of community integrated employment.  Real jobs for people with disabilities, real support.  Guidance concerning the Workforce Investment and Opportunity Act (WIOA) through the Department of Labor, written in 2016, was summarily disappeared almost as soon as 13771 was signed with that Sharpee-sharpness flourish by our new King.  WIOA was a major breakthrough and upgrade in the field, helping to better define what's needed to eliminate workforce discrimination for workers with disabilities.  Now it's gone with the wind, and there's other erasures coming.  Olmstead next?  Or maybe ADA?  And don't forget about Medicaid...

There's hope though that sprang from this conference, from people being informed and outraged and activated and getting it.  The final keynote speech came from Alison Barkoff, a civil rights lawyer who served as Special Counsel for Olmstead Enforcement in the Civil Rights Division of the Department of Justice back in the day (2010 - 2014).  She was scared and angry but hopeful, which is about the only way you can be now.  She ended her speech focusing on what happened a year ago.  When we all got together and laid claim to Medicaid and what it means for people with disabilities.  It ain't just healthcare.  Medicaid funds supports that allow life to go on and happen for people with disabilities.  (I wrote about all that here:  June 23, 2017.)   Knowing that we can do this, that we have to do this, is really empowering but also terrifying because we are gonna have to do it over and over and over and over and over in this era.

So there's all that.

And I'm here near Disneyworld where the conference is happening.  Which makes the whole thing feel slightly unearthly, like a Kafka novel turned into a big-budget pixelated cartoon.  All this passion and energy around fighting against the forces of darkness taking place in the Magic Kingdom.  Plus the Disney resort I'm staying at is under construction.  Which has an overall Trumpian feel as well:  a resplendent resort where all the staff are called "Cast Members" being added onto, extrapolated, super-sized, beam after beam.  (Picture above.)

And then there's Robert Boremski.  He was someone with autism I knew back in the day, when all of my feelings and hopes around supporting and advocating for people with disabilities really started getting into focus.  He wandered off from where he lived 10 or so days ago.  There were search parties, media coverage, all of it.  His body was found yesterday.  Here's what I wrote on Facebook about him:

I met Robert at a self advocacy gettogether we did back in 2005 in a big kind of wornout hotel and conference center in Tricounty. We set up a room there to make art in and he just came in and went at it without one word. Very gentlemanly and quiet and prolific, making those beautiful simple haiku-like drawings and paintings all day. They all looked like a language he wanted to speak, like a place he wanted to get to. Innocent and ordered and calm. God bless him. RIP.

That "wornout hotel and conference center" came back into my head, here at this conference center that's currently being renovated.  I remember that 2005 incident with Robert so fondly; it seemed like a breakthrough watching him paint those paintings with such silent excitement, such happiness.  I don't know.  I guess I miss those days, when art felt like it might save the world, when really art just ends saving your soul.  That's a good thing, don't get me wrong, but never enough.

I definitely felt Robert's passing pretty deeply, even though I haven't seen him in a while.

Here's one of his paintings Bill and I have : 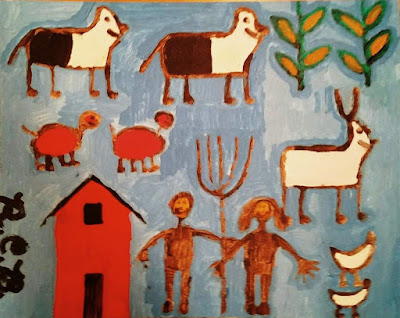 Gorgeous clarity.  Simplicity.  Kind of like an ee cummings poem.  Sweet and concise but also kind of strange like that, otherworldly.

And then there's the Supreme Court.  And the Trump/Putin summit.  And kids in cages.  And fill in the blank.

It's a nasty world out there, and you can really feel it collapsing right now even while a bunch of people are trying to rebuild it or at least salvage whatever vision and version of it they can.  You have to keep on hoping even while you understand the limits of hoping, the limits of hopelessness.  You have to keep trying even though you're sick of trying.
Here's something ee cummings wrote that sums it all up at least for me:
Ain't it though?