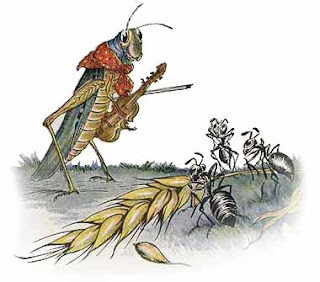 Remember "The Grasshopper and the Ants"?  It's an Aesop Fable that haunted my childhood at least. Its simple and demonstrative narrative crystallizes a point of view that many people still find enchanting; the theme reinforces a self-aggrandizing mindset that allows you to shut the door on people. It's the timeless go-to water-cooler moment confirming trickle-down chic.

Here it is directly from Mr. Aesop himself (copied from the Library of Congress website):

One bright day in late autumn a family of Ants were bustling about in the warm sunshine, drying out the grain they had stored up during the summer, when a starving Grasshopper, his fiddle under his arm, came up and humbly begged for a bite to eat.  "What!" cried the Ants in surprise, "haven't you stored anything away for the winter? What in the world were you doing all last summer?"  "I didn't have time to store up any food," whined the Grasshopper; "I was so busy making music that before I knew it the summer was gone."  The Ants shrugged their shoulders in disgust.  "Making music, were you?" they cried. "Very well; now dance!" And they turned their backs on the Grasshopper and went on with their work.  There's a time for work and a time for play.

That damn grasshopper and his music.  What  an idiot.  Look at him:  dancing.  Lord have mercy. Now those ants -- they know what they are doing.

There you have it, every social ill configured for the masses in much the same way the debate is happening around the American Healthcare Act now being secretly drafted and insouciantly marketed by the Congress and the Senate and the President.  The powers-that-be have cast the whole narrative as a referendum on who deserves help, and who doesn't, and in the structure of the legislation their answer on who actually deserves what is pretty clear:  cutting taxes for the wealthy (the ants), getting rid of Medicaid by limiting its use and efficacy, therefore shutting the door on the grasshoppers of the world.  It's not let them eat cake anymore; it's let them dance.  Go on with your bad selves.

It's disheartening to say the least, but also somehow incredibly predictable, and as small-minded and solipsistic as just about any governmental move and mood has been in the history of this country. And the media respond in kind:  they cast artificial light on the "two sides" of the issue, and there it is again, that fable.  The grasshopper dancing (or marching or resisting or protesting) and the ants going about their business, closing down hallways with the help of police: 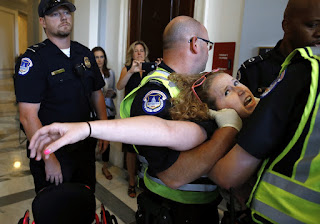 In the above picture is Stephanie Woodward of Rochester, New York; Stephanie, who has spina bifida and uses a wheelchair, was outside Ant-in-Chief Mitch McConnell's office yesterday when police were called to haul her and other protesters away.  Fables aren't really that instructive a lot of the time; they just recycle old and worn-out truisms that are only true in a vacuum. They are often also a way to pat yourself on the back, concretizing the good and the bad into sweet figurines that fit into a little curio cabinet in a fuggy parlor in people's minds.  Here's the thing: Stephanie and many other folks involved in the actual repercussions of the policy McConnell and his army of ants are creating and trying to implement actually are not "grasshoppers" and can't be assigned an actual role in the American Healthcare Act's ongoing fable.  People who have disabilities need Medicaid not just for medical insurance, but to live their lives; it pays for all kinds of support that allow people with disabilities to contribute to their communities, to participate as citizens, to be in the world.  I know this because I help as best I can many people with disabilities of all sorts access those services, and I've seen the greatness that comes from that support.  And it can't be accessed in any other way, at least right now.  Charitable organizations and churches don't have the capacity; neighbors, friends and family try as best they can, but they get overwhelmed, and some people don't have that many neighbors, friends and family willing to help.

It's complicated.  It ain't no fable.

I've seen people with disabilities use the community-based services provided by Medicaid go to college, get full-time jobs, get married.  I've witnessed people who were once isolated and ostracized given opportunities to blossom.  I really don't like to call anything a "miracle," especially 52-year-old government programs, but the funding that program provided and provides really did/does contribute to an actual and beneficial change in people's lives, and not just the people who are labeled, but everyone in their paths.  That support made the world a little better; it allowed people with disabilities to be seen and heard and to be able to take part in all kinds of activities/events/moments that were once unavailable, even unthinkable.  And this is help they could not conjure by themselves, no matter how hard they worked, no matter how much sun-warmed grain they stored.

We all know "entitlement" is a dirty word now, but I feel like we might want to take that word back and re-imagine it as a concept totally worth fighting for.  Not because we're all a bunch of grasshoppers playing fiddles, but because we understand that people like Stephanie and a whole lot of other folks actually are entitled to have access to a world we all share.  And Medicaid is the connection, whether you like it or not.  If we want to have a conversation about how to make it better without decimating it, let's do it.  Otherwise what is the point?

Yesterday I did something I don't like to do.  At all.  On Facebook I commented on a thread started by a local news station about whether "we should repeal or reform Obamacare."  What a delight.  I simply copied and pasted a short article from The New York Times about how Medicaid not only affects poor people, but how many middle-class families depend on it for their older family-members who are in nursing homes, an astonishing number actually.

Many people liked my little comment, but one of those pesky ants chimed in:   My parents and my failure to plan for the future should not be put upon the shoulders of others.

I responded:   "Plan" and "afford" just aren't synonymous terms in the real world, at least in my experience. You may have had no failures in your life, and you may not need anyone's shoulders. Good for you. But many people do need help and I guess whether you like it or not we have to figure it out as a country. "Failure" and "disposable" aren't synonymous as well.

At the core of the morality in that Aesop fable is a sense of what is disposable and what isn't; there's a strong whiff of utilitarianism coming off it, as in if you can't fend for yourself, why are you even alive? Why are you here on Earth?  That's also a central underlying message in the American Healthcare Act as it is now:  legislatively it chooses who should have access to health and life, and who shouldn't.  It closes the door succinctly on so many lives it puts those ants to shame.
Posted by Keith at 8:41 AM