Louis CK is a genius because he is pissed off and trying to figure it out, without allowing his rage to become his schtick.  He deals in taboos (chief among them both loving and hating your kids, loving and hating your friends, loving and hating the whole damn world really), but he does not seem like he is conspicuously pushing buttons just to go blue.  His new TV show, Louie, on FX Thursday nights at 10:30, is a revelation.  Low-budget (the network made a deal with him to give him minimal money upfront for each episode promising no network-exec notes), fidgety and full of feeling, Louie feels like a cinema-verite 1970s movie with a long haired Al Pacino or Dustin Hoffman sauntering somewhere around in the background.  Louis CK basically plays himself, and in the episode I saw the whole thing was a slice of his weird, boring life done so stylishly drab it felt like art.  Intermingled with the scenes of domestic "bliss" (like his daughter bitching because she doesn't get a Popsicle like his other daughter did, or his middle aged pregnant sister farting in the ER) are bits from his hilarious standup.  Louis CK is the 21st Century Jerry Seinfeld in the standup gigs:  foulmouthed but genuinely interested in real life, finding laughs in banality but also miffed that reality is so stupidly funny and banal.  "Performance art" is one of those pretentious terms we often slap onto whatever seems smugly self-contained and well just plain obtuse.  I'd say Louis CK is a "performance artist"  let out of the constraints of that trope:  he brings new insight into what performance means, while creating a small, sharp TV show that's reinventing what "TV shows" can do and be.
Posted by Keith at 8:09 AM No comments:

It's on the cover of Time Magazine this week:  the old "insider/outsider" waltz.  In this instance, the headline is THE INSIDERS VS. THE OUTSIDERS, and the story is about how more mainstream candidates in the Republican party, chiefly Mitt Romney, the Robot of Gibraltar, seem to be losing a battle for the heart of the Republican party to The Outsiders like Michelle Bachmann, Sarah Palin, and Ron Paul.  Outsiderness in this case is theorized (kind of clumsily by Time writer Joe Klein) as loud-mouth dissent, an "amateurish" band of "purists" bragging about the total absence of governmental experience, to "roars of laughter and approval on the stump."
Conversely, Klein uses these words to help paint a picture of Insider Romney:  "thoughtful, nuanced, focused, efficient."  The whole drama is boiled down to, in Klein's words, "country-club aristocracy vs. pitchfork populism."
The simplification is brought to you by The Professional Narrative, Inc., a way of constructing a dichotomy that reifies the ingeniousness of the "Professional," while dispensing with those "amateurs."  Never mind that all the Outsiders mentioned in the article are all Professional Politicians themselves.  It's their artificial positions on a made-up game board Klein seems interested in...
Just like many people construct the Outsider Artist narrative.
On this side of the dance-floor:  "focused, thoughtful aristocratic" professional artists inhabit a museum/universe of credentialization, working within the art historical narrative, studying it, researching it, and perpetuating its messages of professional ascension.  On the other side of the dance-floor, well, on the actual outside of it:  the unestablished, uncredentialed makers of "pureness," amateurs on their way to ascending in a different less-than-professional way chiefly because of their lack of thought and nuance and efficiency.
In Klein's political-science version of the insider/outsider, the insiders are at the mercy of those vulgarian outsiders, but you can tell by the smugness of his prose he just knows the Professional must win for the sake of the country,  for the sake of the common good.
I don't really care too much about the Republican party,  Its innards are like any other organization's that has outgrown its purpose and is just growing for the sake of power-acquisition...  But that outsider/insider split is instructive.  Sarah Palin defines herself as "rogue."  "Outsider" is now a trope of Tea-Partiers and Time Magazine pundits.
The whole concept has outlived its usefulness and is just another way for the Professional Narrative, Inc. to increase it ubiquity, continue to perpetuate the idea that all Romneys are meant to be next in line, and all Palins are amateurs barking at the gate.
It is a phony narrative, a way to turn political (and really any) ideology into a game-show, and to find new ways to make the Established and the Establishment more established without admitting a weird and wild little truth:  all these Republicans, insiders and outsiders both, are knee-deep in the same hoopla, saying basically the same thing.  Being an insider or being an outsider really has no meaning when everyone is part of the same circus.
The Artworld (and yup I am purposefully using this vague and hegemonic term)﻿ has that hothouse sameness as well.  The Professional Narrative, Inc. wants to separate the Insiders from the Outsiders, but in reality there's a lot of disintegration happening between those two poles.  We might want to celebrate that disintegration.  We might want to start the official attack on that professional narrative soon...
Posted by Keith at 6:13 PM No comments: 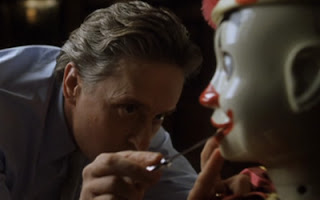 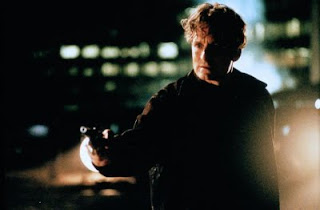 Sometimes the best way to watch a movie is when you're drunk and tired at about 9 pm, with a couple of really close friends who are that way too, and the movie turns into a collage of laughter and whispers and imagery you remember but the meaning gets dislocated, and that movie becomes an installation art project in your head.  David Fincher's The Game, starring Michael Douglas and Sean Penn, is one of those movies.  I've only seen it that one time because I don't want to spoil that initial silly serendipidy that got into my brain.  All I remember is being dumb and ripped and enveloped:  Michael Douglas in an Armani suit, lit in gun-metal-blue light, with a bleeding forehead.  A frantic clown-doll haunting every other scene.  A huge mansion.  Shiny floors.  A taxi cab and a car chasing each other.  Wine glasses in a fancy restaurant.  Scenes with a lot of talk about nothing, plot details spilling out of chandeliers and a sexy ice-blonde waitress climbing out of her apartment in high heels.  A nothingness is at the center of it all:  meaninglessness that gives you a sense of how important meaninglessness is.  Beautiful, foreboding music like a music-box lullaby played with the intensity of Psycho violins.  And the three of us wrapped up in, and not understanding, all that pomp and style. Laughing and being stupid.