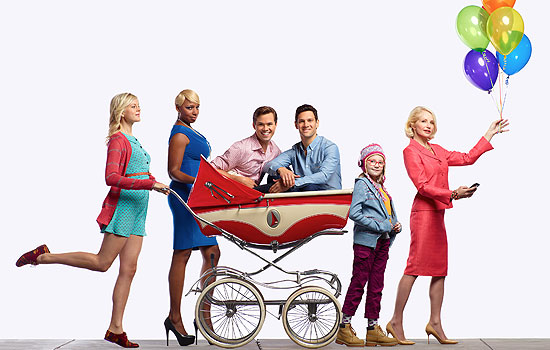 Ryan Murphy's The New Normal is a sitcom that has a prefabricated and self-congratulatory smarm all its own.  It feels so plastic that you want to throw it into the recycle bin in hopes it gets turned into something quiet and useful, like maybe a beach ball or an umbrella.  When it goes caustic and mean, in the guise of Ellen Barkin's caricature of a conservative Ohio grandma, it comes off as gay self-hatred championing openmindedness, and when it goes all sweet and kind it feels like a horrible cartoon of actual feeling.  Everybody in it is so amped up that there's no human left -- just these off-kilter stereotypes chiming in, like Murphy's Glee without one speck of glee, added to a propensity to be offensive just for shits and giggles.  The two gay guys are having a baby with a blond, dewy-eyed surrogate straight out of central casting who has a daughter who I think was cloned from the twee little girl twerp in Little Miss Sunshine.

The three or so episodes I've seen play out like parodies of some other show about two gay guys having a baby with a blond surrogate that's not that good but at least might be trying harder to get at something beyond the homosexual/heterosexual divide.   The New Normal has a distinct Romney era feel, as if Murphy and his creative team are prematurely welcoming in a new kind of zeitgeist in which gay people and straight people live separate lives and only come together for baby-making and bitching at each other.

God help us.  What's the word?  Forward.  This thing is backwards to the extreme.

One of Those Things

Saturday night I saw Fiona Apple at the Aronoff Center for the Arts, downtown Cincinnati.  Her performance conjured many images, many reactions inside my skull:

But beneath all that floated something I had seen next door to the Aronoff, at the art gallery, in a one-man show called "Taint."  Anthony Luensman is the artist.  The show itself is kind of creepy and old-school-contemporary.  Like Jeffrey Daumer went on a shopping spree at Ikea, or Andy Warhol's ghost is thinking way too much about "desire."  But the one object/image that stood out from the show -- and that kind of fused with Ms. Apple's demonic/angelic/bipolar/mercuric/girl-pissed-off-because-you-did-not-call-her-back voice -- was a white neon ladder in the basement gallery there.  It shoots up off the floor and crashes through the ceiling tiles, and its eerie, funky glow shines inside and across the ceiling so that wires and insulation and pipes become a secret that is being told.  Ms. Apple's voice and that ladder intertwined while I listened, and I could almost close my eyes and start to climb up the artificial light bars into a metaphysical ceiling, like that voice and that ladder merged into both a way to escape fury and to somehow blend into its heavenly glow.

None of what I felt or heard or saw in my head was meant to be connected.  It was total serendipity.  But somehow Luensman's ladder and Ms. Apple's voice were meant to be combined into that one moment when there's perfection that was never intended.  That's when art works the best for me.  When it is unintentional, stupidly intertwined, momentary, and oddly blissful.
Posted by Keith at 1:46 PM No comments:

What Is the Point?

Two things are coming together this year for me, and somehow the main nexus of this connection hits me hardest when I'm teaching the Disabilities Studies class at Miami on Wednesday nights.  It's a class about how to create alliances with people with disabilities, so it's built around first and foremost trying to understand the history and the social/cultural/economic/political ramifications of that history.  And mainly the historical aspects,  especially for those folks labeled developmentally disabled, are pretty much horrific.  For much of the 20th Century, they got disappeared, sent off to State Schools and other places a lot of the time, and even when they were not removed they were relegated to sub par environments created to "fix" them, and  in order to make a better world for everybody else.


So far we've talked about eugenics, Goddard and the Kallikaks, Special Education, ADAPT, the American with Disabilities Act, Applecreek and Orient (two large and terrible institutions in Ohio that were eventually shut down), and other aspects of disability history.  We've also focused on how to decolonize and deconstruct attitudes and reactions, as you enter into relationships with people with disabilities that are meant to be kind and helpful.

Often "help," in the way we approach people with disabilities, becomes a way to control and to erase and to make ourselves feel better.

I'm using "colonization" as a gateway into many ideas in class, hoping that metaphor with its contexts of Diasporas, plantations and ghettos bleeds over into the way we understand nursing homes, hospitals, day programs, special education classrooms, and other institutional settings  people with disabilities so often were (and still are) consigned to.  That turn from thinking of institutions and services as "charity" and "necessary" toward seeing them often as places to house and group in order to "fix" and "erase" is the hardest rhetorical and moral move to make.

Which brings me to:  Antonio Adams and Raymond Thunder-Sky.  Right now I'm also getting ready to write an article about Antonio and his relationship with Raymond for Raw Vision, an outsider art magazine.  I've invited Antonio to come to the Disabilities Studies class, as a lecturer.  The main reason I did this is that I am beginning to understand now what happened with Visionaries and Voices and me.  I feel more than a little disillusioned about the whole thing.  I started out trying to make my relationship with Antonio and Raymond and other artists with disabilities Bill and I met as authentic and systems-less as possible, meaning I never thought in a million years meeting up with them would have been the genesis of a day program.  That was very naive, because one of the main reasons I met them was because I was a systems-worker.

In fact the whole time I did what I did for Visionaries and Voices I never saw it as constructing an institution.  I saw it as a renegade enterprise in which people of all sorts, all classes and creeds and weirdnesses, combined their talents to make a big impression.  That's Utopia, I know, but I didn't even understand the limits and dangers of thinking that way either.  Because day to day I did whatever I could to make Visionaries and Voices secure.  I wrote grants, I helped hire people, I pushed and pulled to make it have a "revenue stream" outside of the grants and donations, eventually advocating for it to be funded by Medicaid, with its very colonizing rules and regulations.  But even as I stubbornly fixated on sustaining Visionaries and Voices as it grew from informal art shows to finding a studio space to hiring a studio coordinator to finding a bigger studio space and hiring more studio coordinators to finding two studio spaces and getting Medicaid involved to coming up with a Table of Organization, etcetera, etcetera., I still did not get the ramifications until it was too late.  And as the number of artists involved in the effort grew from three or four to forty to fifty, and as their statuses as "artists" sharing materials and ideas became closer to "clients" sharing staff,  all I thought about was:  let's keep this thing going.

I hypnotized myself into believing once Visionaries and Voices was fiscally and organizationally sound, THEN the real work would begin.

What was the real work?  Oddly enough, for me, the real work was ensuring that Visionaries and Voices was the opposite of a day program, the synonym of an institution.  Oddly enough, it has turned into a day program, a well-run one with much the same spirit as what we all began with, but what's missing is that sense of "systems-lessness," that sense of breaking free from the structures that created the colonization of people with developmental disabilities in the first place.  In other words, in Foucault's words,  I knew what I was doing; frequently I knew why I did what I was doing; but what I didn't know is what what I did does.


The real work for me is right now, as we try to build a gallery and a studio that is not about charity or Medicaid funding, but a serious reinvention of what "disability" and "outsider art" can mean, without the need for constant fundraising and without the tendency to label people so you can raise awareness about their labels so you can fund the programs that will help them be a part of the community.

Thunder-Sky, Inc. is the gig now -- a small, storefront gallery in Cincinnati that sponsors six exhibits a year.  It's a non-profit enterprise but without a lot of frills and machinations.  No telethons.  No silent auctions.  We incorporated in 2009, and Antonio is the Artist-in-Residence.  And so far we've been able to keep it going through art sales and private donations that aren't based on the "disability" trope, but on the idea that people need an unpretentious, unofficial, beautifully unique gallery space in their midst.  The shows and mission aren't based on anything except Raymond's unique life and legacy.

Antonio and Raymond were artists I met coincidentally, because I have a connection to the system that supplies services to people with developmental disabilities.  I loved their work, though, not because of their diagnoses or because it had anything to do with systems, but because I simply loved their work and the way they went about making it:  stonecold dedication, without a lot of help from anybody.  I was adamant my connection to the system would not dictate the way I tried to help them, and yet in the end it did.  I wasn't a great ally because I was focused on "helping" them in a generalized, charity-based fashion.  I thought by doing this I would end up "helping" a lot of people.

Maybe I did, but in the end I kind of regret it because Utopia did not occur.  A day program did.

I'm not whining.  Of course, Utopia never occurs.  Visionaries and Voices is a wonderful thing.  But it's not the thing I intended, even though it is everything I thought it was supposed to be.  Maybe that's contradictory and selfish and silly, but it's my truth.  And as I try to think and rethink and theorize about how to best "help" people with disabilities now I feel like I always need to start off with a warning:  try to know implicitly what you do does.  Try to figure out as you try to help what that "help" means morally and ethically and culturally, so that what you're adding to the whole mix isn't yet another version of what's happened so many times before.