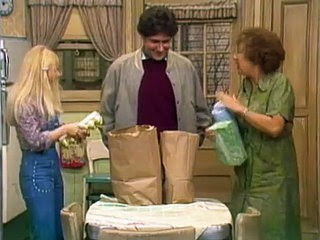 "Gloria's Boyfriend" is an episode from the fourth season of All in the Family (2/2/74 is when it first  aired).   Just stumbled onto it a little bit ago on cable, and then rewatched the episode on You-Tube (here).  I spend a lot of my time trying to figure out how to help job seekers with developmental disabilities access good jobs in the community, and "Gloria's Boyfriend" is all about that very topic, albeit a little dated.  And yet the way the subject matter is handled and worked through reminds me of how much things really haven't changed too much.  Possibly the language has been overhauled (the "R" word is used both pedantically and insultingly in the episode), but the actual tropes and metaphors and fears still kind of linger when you approach the idea of someone labeled as developmentally disabled being able to be a part of the workforce, a contributor to the way we all get things done everyday.

"Gloria's Boyfriend" tells the story of George the Box Boy at Ferguson's Grocery, and the one day he brings the groceries home as a favor to Gloria.  It's obvious he has a crush on her, and for a minute or two you get the feeling that's the creepy direction the story is going.  But the actual narrative gets focused around a subplot, in which Archie and Michael are using an adjustable bench-plane to help refit the upstairs bathroom door that isn't shutting properly.  That door becomes both a metaphor and a plot device, as does the faulty tool Archie is using:  the bench-plane's blade is not yielding any wood shavings as Archie glides it across the door.

In the episode, George is given to us as a big, sweet guy who is a little slow, but capable of expressing himself as well as having the ability to understand when he's mistreated  and when he's welcome.   The conversation about him among the Bunker clan is a survey of the ways people with developmental disabilities have been represented and seen over the course of the 20th (and now 21st) Centuries:  menace, innocent, deviant, oversexed, simpleminded, and so on.  The pendulum from "how sweet" to "how dangerous" is quick and steady, especially when Archie talks.  In fact, Archie in the episode is a sort of stand-in for the way many people understand what "developmental disabilities" are.  He's constantly warning his daughter to watch out for George's advances ("Stop getting him all excited -- people like him have a one-track mind," he says), while when speaking directly to George he's condescendingly kind and didactic (he tells George to take a break, sit and watch as Archie and Michael try to whittle down the door so it'll fit, using the tool that does not work).

The crisis moment comes when Archie again speaks to Gloria about the possible dangers of her friendship with George, and George overhears.  Archie feels the need to spell what he considers is George's main diagnosis and prognosis:  "You gotta be careful around a d-u-m-m-y."

It turns out George can spell, and he tells everyone that in fact he's not a dummy, and he's going to show them all he's not.  He runs out the backdoor.  This instigates a conversation among all of the family about how George from Edith's perspective is a "nice gentle boy," and Archie counters with examples of "his kind" from movies like Of Mice and Men and The Hunchback of Notre Dame, while Gloria and Michael defend George as "special" and "retarded," but able to work and live in the world just like anybody else.

Later in the day, Gloria goes back to Ferguson's to get ice cream, returns to tell everyone that George has been fired.  They all hope it wasn't because they asked him to stay a while earlier, and also because of what Archie had said.  Then a knock at the door, and George's dad comes to find out where George is, as he had heard from Mr. Ferguson about the firing, as well as the fact that George's last delivery was here at the Bunker's.  Another history and