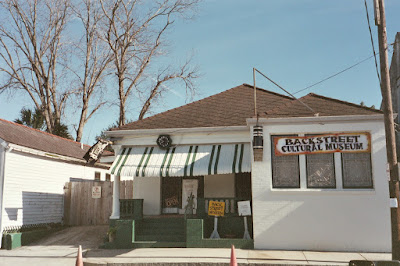 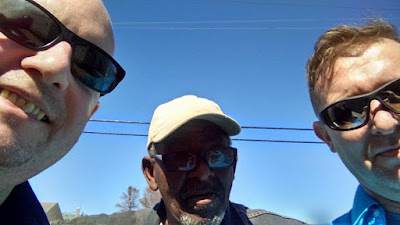 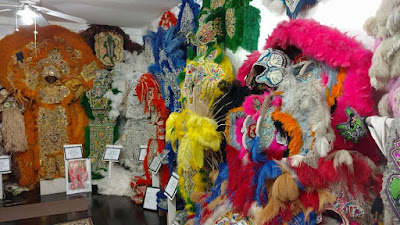 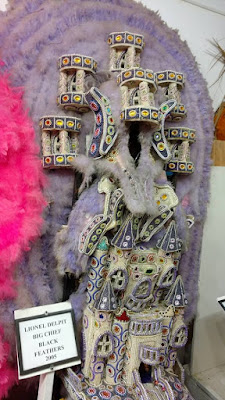 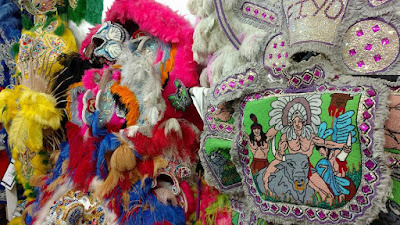 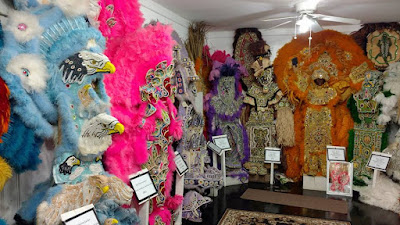 The Backstreet Cultural Museum is nestled inside a house in the Treme neighborhood in New Orleans.  Bill and I finally were able to make a visit last month when we there, and it's one of those experiences that's hard to convey, outside of just showing pictures and describing the feeling.  Here goes.

The door wasn't locked, the open sign was out, so we just walked into the place.  The front-rooms are the actual museum (with a claustrophobic hallway lined with black-framed newspaper articles leading into a little kitchenette).  Two front-rooms are stocked with enough Mardi Gras Indian costumes as to make your head spin in a gleeful, dreamy manner.   On the right is a folding chair next to a little fan with a sign that says "10.00 per person."

On that morning we went no one was around.  A sense of vacancy, all these costumes and history left unattended, gave the whole visit a ghostly sweetness.  (We met up with Sylvester Francis, the owner and proprietor, on our way out; he had gone to the store.  So we were able to pay him in person for the visit, as well as get a selfie with him, see above.)  I felt cushioned inside all the feather and beads there, those outfits giving off more than vibes, a sort of radiation you can't Geiger-count, or even understand.  All that work, all that thinking and sewing and doing.

Up close the Mardi Gras Indian costumes read both show-bizzy and heart-breakingly homemade, astutely constructed and yet firmly dedicated to "prettiness."  In fact, "pretty" is what the makers of these works are going for -- it's the highest form of compliment in Mardi Gras Indian culture.  (If you don't know the history of all this, check it out here: Mardi Gras Indians.)  Basically, Mardi Gras Indian culture is an African-American self-made New Orleans tradition in which "tribes" of artists and performers construct voluptuous costumes from feathers, beads, and whatever else is needed; subject matter for each outfit is based on regional histories and other ideas.  Once the costumes are complete (it takes months), the makers and others parade around on certain days, seeking out optimum moments of grandeur and exposure.  The whole thing started in the 1880s, but also has some historical connections to slavery and Congo Square in the 1700s New Orleans, a site where African-Americans folks were "allowed" to party and play music for a certain period of time, flaunting their culture and humanities even while they were enslaved.

So all that gorgeousness, like a lot of beauty, is anchored in horror and survival, and yet when you witness the costumes up close you only are in awe of the work, by the sheer funky fluorescent profundity of each effort, each stitch.  I could go on.  The Backstreet Cultural Museum allows  "art" to get real, without getting self-righteous.

Bill was on a panel last week at the Cincinnati Art Museum concerning "artists and social justice," and while it seemed like a valiant effort on the parts of everyone who participated, I kept feeling antsy listening to the talk.  Bill was antsy too up there on the stage, trying his best:  how does art really contribute to cultural and social salvation?  I mean, for real?  How do artists matter in a world going to, well, kind of going to hell?  Bill mentioned "humor," and his personal history, his connection to people with developmental disabilities, how we are all equal, how that has to matter. That seemed pretty sane.  But a lot of the other panelists went a little loftier, tried to draw some conclusions, some abstractions, and I think that's why I'm writing this right now, why I wanted to revisit Mr. Francis's joint.

The Backstreet Cultural Museum is a funhouse of sacredness, a tribute to surviving, but also a celebration of the intricate and somehow heady process of "prettiness."  Each bead and feather is a way to understand "social justice" in that little house on Henriette Delille Street.  The Mardi Gras Indian pretentiousness devours pretentiousness.  It's a working-class code of departure, of dedicating time and effort toward style, glitz, and escape, and yet also a return to personhood, to identity, like drag, only the end result here is spectacle beyond spectacle, turning the streets into theater, but a kind of theater that transcends theatricality.  It's homespun, visceral gaudiness.  It's screaming and laughing and carrying on, faced with unfairness and bull-shit politics and history and poverty and so on and so forth.  But it's not by any means fussy or self-involved or pedantic or even literal.  Those costumes reverberate with a strange magic you can't qualify.  That strangeness allows all of us to feel how odd it is to love without knowing what's being loved.  To be alive and full of love and energy and spite and power and creativity:  to be heroic just walking down the goddamned street.

That's about all I have to say.

Except, thank you very much Sylvester, and God bless you.
Posted by Keith at 1:05 PM No comments: