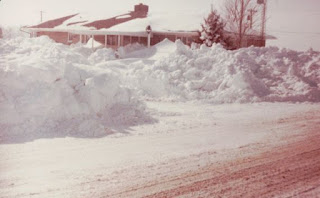 We're doing a show at Thunder-Sky, Inc. that commemorates the blizzard that swept through this region in 1978.  Opening January 7, 2017, it's titled "Thunder-Snow," and about 30 artists from across the area have contributed works of all kinds (poems, paintings, sculptures, drawings, you name it), delving into their memories and dreams about what it felt like confronted with all that colossal snow-fall and fury.  Evidenced by the blue-and-white-tinged nostalgia and comfort depicted in many of the works, the '78 blizzard, nicknamed "The Great White Hurricane," somehow yielded its own form of community:  neighbors who barely spoke to one another in the sunlight helped dig each other out and families got reintroduced to one another, surviving together as opposed to "living together."  The whole world seemed altered, at least for the time it took for the snow to fall, the wind to turn the snow into castle-sized drifts, and eventually for the air to warm and melt it all away.  The stories behind most of the works are next to each piece on the wall in "Thunder-Snow."  Those narratives really are what the whole exhibit is about.  The stories we tell ourselves before, during and after crises, those images and smells and tastes we commit to memory and then somehow lose, flood back when given an opportunity, a reason to reinvent and retrieve them.

Blizzards isolate, turn people inward, and yet due to their catastrophic nature they cause people to reach out for help.  That contradiction is what gives, I think, the Blizzard of 1978 its force of inspiration:  there was no running away from it, only trying to figure out how to live through it.  One of the pieces in the show is more of a "happening," in that Sharon Butler is asking folks to write down what they ate during the storm and then she will be making versions of those recipes for a closing-event dinner.  Food, of course, is central to a blizzard story.  What's the first instinct when people hear on the news that snow's coming?  Rush to the grocery store, stock up for "the white death."  In the '78 storm, though, many people didn't have the chance to make a run for food, so they had to figure out how to make what they had on-hand into something that would get them through. That's what happened with my family.  I always remember my dad making this really salty but somehow totally delicious stew the third or fourth day we were cooped up.  I was 13 at the time. I think all we had left was some bacon, old shriveled potatoes, pinto beans, garlic salt, maybe an onion. So he made this soup for us.  He didn't really cook when there wasn't a blizzard; my mom was the cook. But he got bored and hungry and just decided to do it.  We were all like that, cabin-fevered and hungry.  He fried the bacon, cooked the potatoes, soaked and cooked the beans.  It was just this taste of salty warm water, the potatoes going creamy, that bacon/garlic residual lining the inside of your mouth.  And out the window all that white.  We weren't a real close-knit clan, and I don't have a lot of sentimental-happy memories stocked up, but that one comes at me with a warm and elemental authenticity.  Remembering that stew he made helps me understand that you often have to focus on something peripheral and real to get at the bigger truth, whatever that "bigger truth" might be.

E. E. Cummings once wrote in one of his poems that the "snow doesn't give a soft, white damn whom it touches," and I think that's what makes a blizzard of the magnitude of the '78 one such an epic moment.  That snow is a reminder of how much nature really could not care less about your problems, or even your existence.  That essential epiphany of how small you are allows you to reconnect with what makes you human.