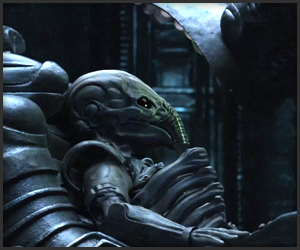 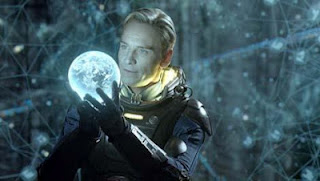 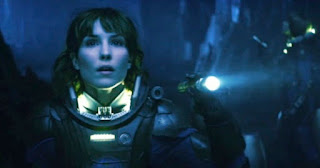 Prometheus is a messed-up dream of a movie, a scattershot wasteland of kinky little bits and pieces of other movies (chiefly Ridley Scott's Alien and Bladerunner, but also there's some Jurassic Park, 2001: A Space Odyssey, and Lawrence of Arabia tossed in) that pull together to deliver an experience reminiscent of entering a trance.  Prometheus is a completely intoxicating feeling, during and after.  The plot and the characters don't really matter:  the story is kind of slow-motion sci-fi bull-shit, a baroque retelling of the first Alien, only this time instead of working-class grunts and an unnerving android waking up pissed off in the middle of outer space it's a group of geeks and executives and of course an unnerving android (played astutely by Michael Fassbinder).  This prequel's mission is lofty as hell, sprinkled with mythological, philosophical and even Biblical overtones that are kind of laughable, but that's the joy of a movie like this:  it takes itself so seriously that you just forget about how stupid it is.  In short the plot and characters are exactly what you want them to be.  They go through the motions brilliantly, so that the film's atmospherics overwhelm everything.  You get encapsulated by the tone-poem meanness of outerspace.  There's a voluminous metal-speckled storm, the lush dejavu of H. R. Giger's sadomasochistic paradise, the vinyl perfection of a corporate starship, the biological tragedies of bodies being invaded and exploded from within.  A robotic abortion is the film's centerpiece for God's sake.  All the crap about creation/destruction is necessary to make the movie melodramatic enough to seduce you, but in the end what is so incredible is the movie's environment and elegance, the way Ridley Scott's obsession comes to fruition.  Every frame of this movie is full of creepy love.  You want to hold it in your hand the way Fassbinder's David robot holds a holograph of Earth in his.  You want to marvel at its perfection.  I could go on.  The bald-eagle-headed, gigantic aliens, the canopic jars leaking poisonous fluids, Charlize Theron drinking vodka and being all executive-astronaut-bitchy in her palatial digs aboard Prometheus, Noomi Rapace's Siquourney-Weaver drag...  All of it fashioned and preened into something you hardly ever get in this world:  the real thing.  All the hype about Prometheus was worth it.  God bless America.