Yet to Be Born 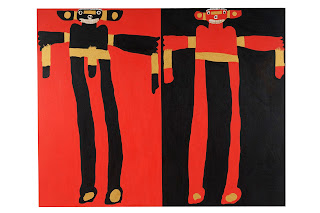 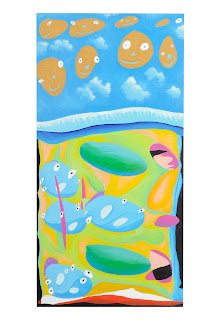 In January of 2008 I lost my father and in Sept 2009 an artist Keith and I championed, Donald Henry, passed away suddenly. The recent passing of Brian Joiner shook me more than I thought it would. I thought knowing this was likely based on his condition would have lessened the effect.

I ran across a piece I wrote about “Vision and Mission” which I shared with all the staff at Visionaries & Voices on 10-22-08. In it, I tried to address how the death of my Mother and loss of Raymond Thunder-Sky shaped the urgency of what we (Keith and I) were trying to accomplish.

Here is a little bit of it:

I consider art as a great equalizer. When artists collaborate, it is one of the best ways I know of to step outside yourself and become a part of a larger conversation and a larger art world. The “Guernica Project” Antonio Adams and Brian Joiner are currently finishing up is a great example of what I am trying to say. Using one of Picasso’s most famous works as a spring board into a new work, Antonio and Brian are creating a work neither of them would be able to accomplish on their own.


As a co-founder of V&V, I appreciate your struggles and am proud of your accomplishments. It is my hope, my dream, my vision to someday see V&V serving the Raymond Thunder-Sky’s, the Antonio Adams and the Brian Joiners yet to be born.

I closed with this:

Today 10-22-08 my Mom would be 76 years old and Raymond would have been 58. Let’s make it a point to live our lives no matter how long or short with a sense of “Vision and Purpose”. Helping artists achieve a greater sense of their worth in this life is mine.

Antonio and Brian: Imagination and Skill 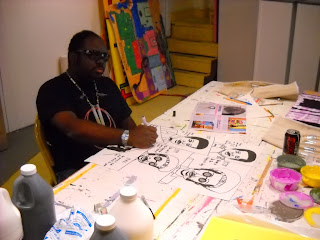 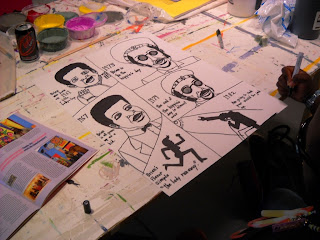 Above, Antonio Adams works on a drawing at Thunder-Sky, Inc., about Brian Joiner, who passed away this week at the age of 49.  Brian was an incredible artist and mentor to Antonio.  They worked on several projects together, including a beautiful suite of large paintings that paid homage to Picasso's Guernica back in 2009.   Antonio's drawing is an episodic and fictionalized account of Brian's life through Antonio's magical looking glass.  Antonio pays homage to Brian's imagination and skill with his own imagination and skill.  Brian will be missed.
Posted by Keith at 2:14 PM No comments: 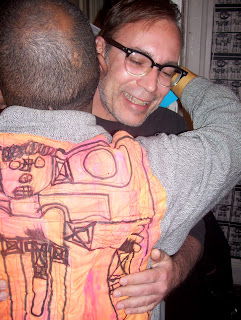 Donald Henry passed away last year.  There's a retrospective of his work at the Northern Kentucky University Main Art Gallery in Highland Heights, Kentucky, up until October 29, 2010.  We went there last night and got to see his work, and this reminded me of the first one-man show he had at Semantics Gallery in Cincinnati in 2007.  I wrote a poem about it.  In the picture above, Donald is hugging David Dillon, who I think helps run the Semantics Gallery.  Folks from Visionaries and Voices sewed a painted-cloth version of one of his paintings on the back of his suitcoat.  I will never forget that night.  A total 2+2=5 moment.  Here's the poem:


The art gallery was cold as hell
Maybe about ten people were there
Some guy was trying to fix the furnace
And everybody else was standing around.

Mean-looking beautiful things
Those robots he does
Some with gigantic genitals
Some without.

Donald had on a shiny necktie
And a ski-mask
Drawing robot versions
Of the characters on Gilligan’s Island
While a few of us tried to remember the theme song
To that show.

Smoked sausage links
Bubbled in a crock-pot of barbecue sauce
Next to a ripped-open bag of potato chips
And some of those miniature Three Musketeers bars.

Pink and lavender
With those match-stick lines
And a number across her chest.

He was what he was
And this is what
He does.

Letting us know
He was capable of hugging us
It was that easy.

I guess the ski-mask too

But the worker in the group-home was new
And she hid those clothes
Thinking they were his dress clothes
And that they should be kept clean for special occasions
Only.

He was not killed thank God
Just bruised.
Posted by Keith at 1:16 PM No comments: