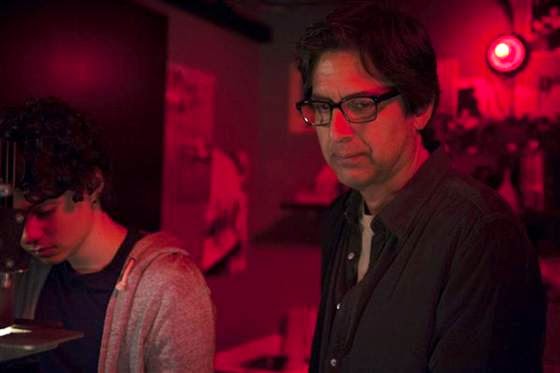 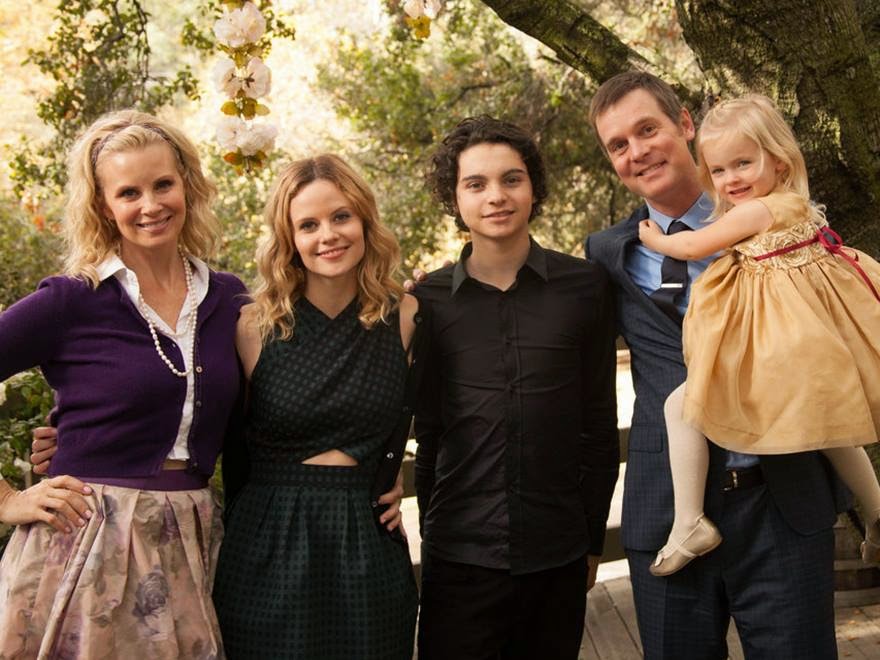 An Apothecary of Jelly Jars and Moonlight 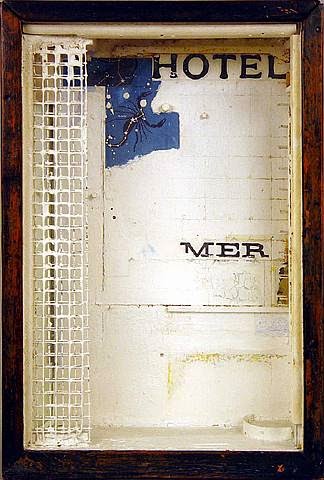 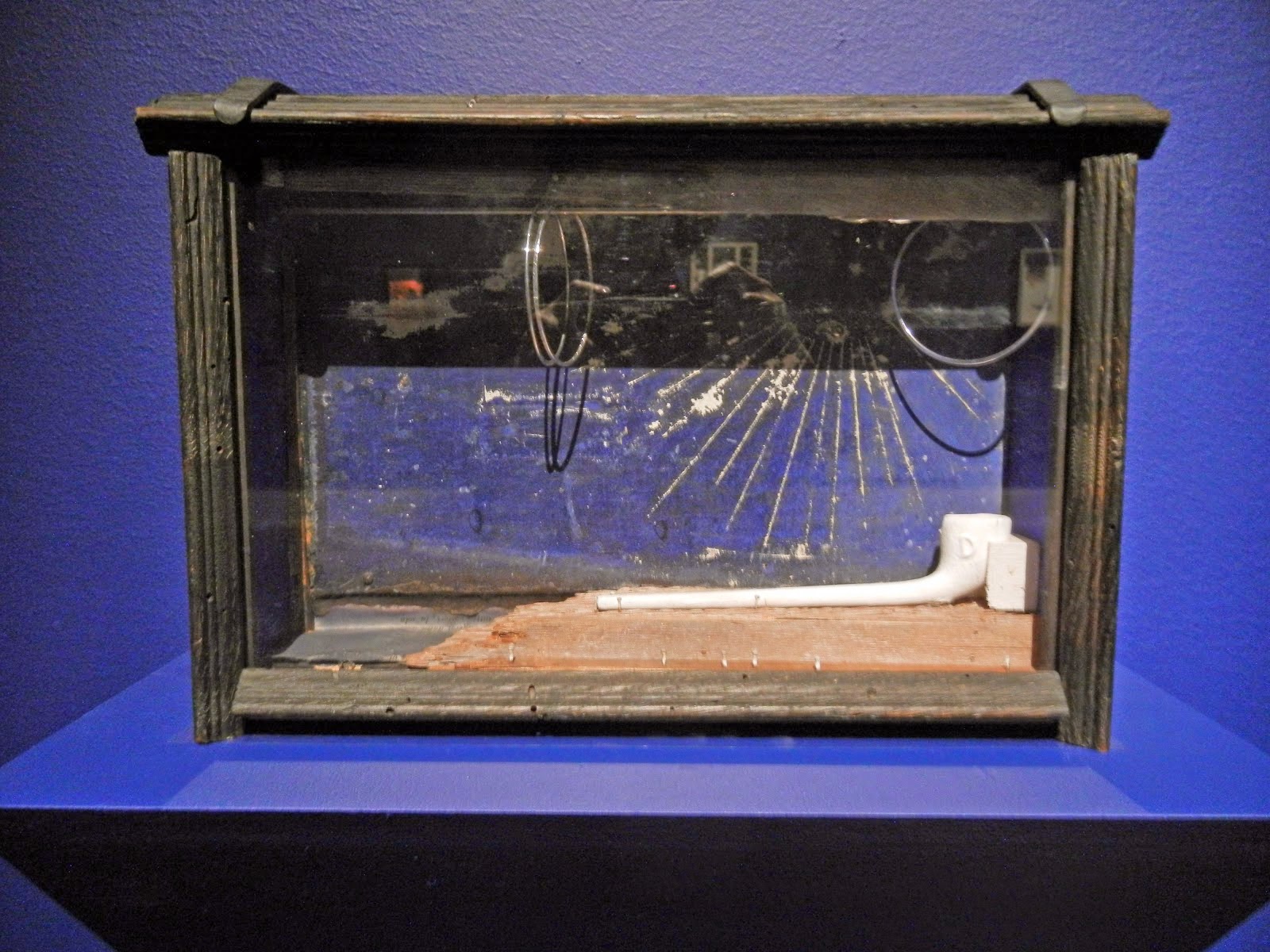 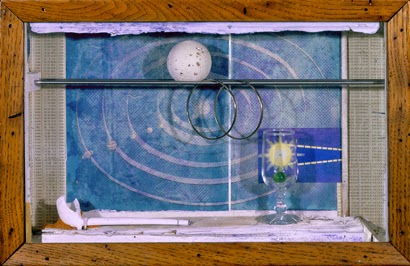 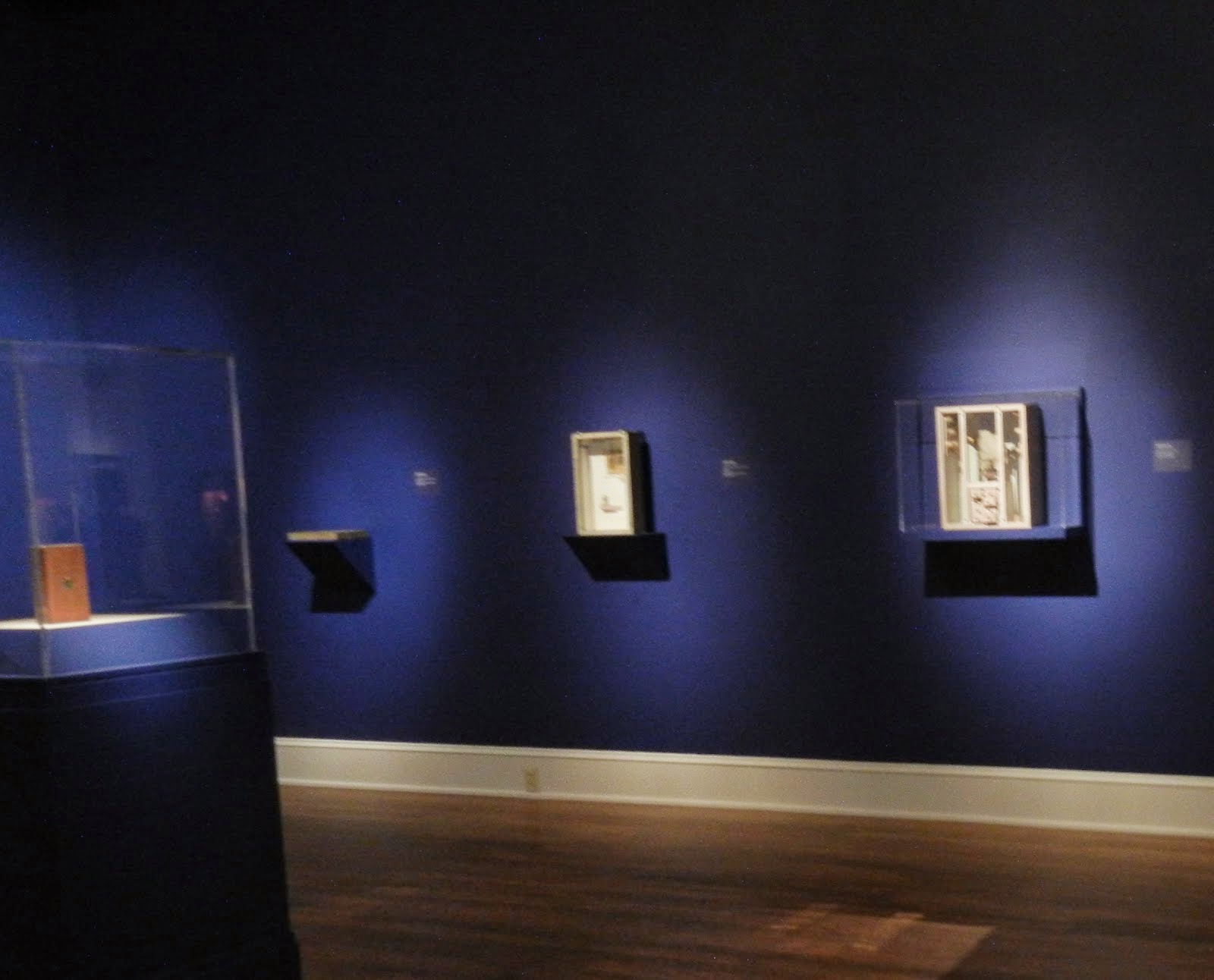 A few weeks back we went down to New Orleans to see friends, and Bill and I went to the New Orleans Museum of Art just to go there.  We stumbled onto one of those beautiful, serendipitous experiences that only happens when you don't make checklists or plans.  In 2012, NOMA refashioned their collection of Joseph Cornell shadowboxes, collages and dossiers into a self-contained universe with dark blue walls and intergalactic spaceship lighting that allows Cornell's world to sustain itself as both playfully serious and transcendently whimsical, a rare concentration of his works that allows you to quiet yourself down long enough to understand he was probably one of the greatest artists of the 20th Century.  And not because he was a part of a trend or reflected the turbulent times he lived in or whatever, but truly because he found a way out of all of that, and into a poetic century all his own.  He was making places for himself to escape to, dreamlands constructed from cracked window-glass and old toys, white-washed lavatory doors, forgotten wire in a junk-drawer, cobwebs in a corner crystallizing into words and phrases that never get said just evoked, unspoken yet vibrating.  The room of his work at NOMA opens up into its own versions of shadowbox intimacies; you want to go to sleep inside each of his pieces, find the dream he was dreaming the moment he made each one.  He was one of those people who could not find any other way out of himself other than through recognizing what he craved and fetishizing it into his own self-made religion, worshipping hotel corridors, magic tricks, sand on shoes from the beach, postcards inside shoeboxes, mystical moments you have that always go unsaid, that intricate form of daydreaming that allows you to find a whisper even inside a hive of bees.  He was a master storyteller who found epic narratives within empty pill bottles; he found hope in paint chips and discarded envelopes.  I kept walking back and forth among the pieces there at NOMA, not wanting to know titles or dates, but just luxuriating in the fact that they have been so beautifully preserved, tiny interstitial sentences, images, objects, minutes, days, all of it self-contained, an apothecary of jelly-jars and moonlight, misery unraveled by tenacity and determination.  Joseph Cornell knew what he was doing every step of the way, those collages and shadowboxes let us know:  he found his way through by working everyday of his life on a project he could only see one small puzzle-piece at a time.

Some Playful Soul Shows up with a Bucketful of Piranhas 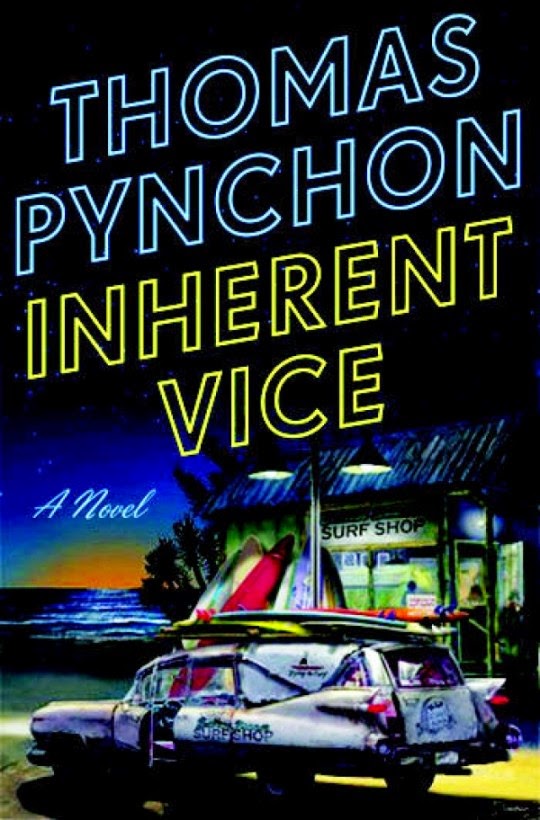 Thomas Pynchon writes like a great big dumb-ass, and I love it.  Often touted as a postmodern stylist and just as often derided as an emperor without clothes, he writes with a strange reptilian gusto that allows each novel to be totally hot and totally cold at the same time.  Every writerly move he makes seems arbitrary and yet preconceived, intelligentsia-stylized but also urgently infantile, smart but totally silly, funny-haha and not-so-funny-weird.  I've read every book he's published because I truly love the worlds he makes, and the distinct flirty mannerist folly all his books seem to go after.  He's not interested in "fiction" or "characterization" or "plot" or anything of that bull-shit.  He's looking for a way out while also reveling in the shimmery nonsense he churns out sentence after sentence.  His best book, the one I just reread in anticipation of the Paul Thomas Anderson movie based on it, is Inherent Vice.  It is his perfect dumb-ass masterpiece.
The story is like a Quinn Martin production, all private-investigatory flourishes parenthesized by pothead exhaustion and pornographic sex scenes and the sadness of the sixties hitting the seventies with a great big whimper.  Everything is hazy but the words he uses to describe the haziness are sharp as knives, a zoom-zoom vernacular from Laugh-In, Dark Shadows, and 1970 soap operas merged with a Saul-Bellow arrogance along with a sweet hint of forgiveness provided by a love of total losers.  Laugh-out-loud hilarious most of the way through, the whole book has an atmosphere of privacy being invaded by questions that can't be answered, a swirl of neon and ice cream and palm trees and concrete and acid and bullet-holes, like a James Rosenquist painting turned into a verbose puppet-show.  It ends so beautifully there's an ache but it also flails and fractures all the way through so that as you coax yourself toward that ending you give up trying to understand what's going on and enter into a Pynchonian coma, comfortably numb and also a little pissed off.  And yet still that ending has lyrical finality, a shut-lid on Pynchon's strange brew full of jokes and sinister tensions and silly little asides that never add up but then add up when you're not thinking about things adding up.
Here, close to the start of the book, he's describing Hollywood right after the Manson murders (which play an inherent role in Inherent Vice's overall schizoid thematic structure):
“Odd, yes, here in the capital of eternal youth, endless summer and all, that fear should be running the town again as in days of old, like the Hollywood blacklist you don't remember and the Watts rioting you do - it spreads, like blood in a swimming pool, till it occupies all the volume of the day. And then maybe some playful soul shows up with a bucketful of piranhas, dumps them in the pool, and right away they can taste the blood. They swim around looking for what's bleeding, but they don't find anything, all of them getting more and more crazy, till the craziness reaches a point. Which is when they begin to feed on each other.”
Wow.  The metaphor bleeds, right?   But it's chaotic and vibrant enough to gain steam, until it's sort of a joke, sort of not.
PT Anderson cast Joaquin Phoenix in the role of Doc Sportello, the private-dick at the center of the Vice tornado/revelry/big-sleep, and I think he'll work because he's got a long streak of dumb-assed-ness all his own to pull from.  (And that, fully formed and perfectly executed dumb-assed-ness, is truly Pynchon's major gift to readers, the nonsense of the gods, first truly and grandly conjured in his penultimate tome, Gravity's Rainbow, which is loftier and heavier than Inherent Vice, but does a lot of the same things, only with a lot more grimness and determination.  You might even code Inherent Vice as Gravity's Rainbow Lite.)  Phoenix's off-kilter countenance and need to be methody is perfect, because that's kind of a Pynchon gig as well:  the egotistical freak-out guest on a Letterman episode spliced with Johnny Cash on Benzedrine, down-home funk and spectacularly self-aggrandizing stunts, full-on American glory built for the ages.  Yup Phoenix will do.
In conclusion, Inherent Vice is fucked-up, stupid and brilliant.  Thomas Pynchon is Evil Knieval.  Let's hope PT Anderson gets the joke.
Posted by Keith at 11:24 AM No comments: