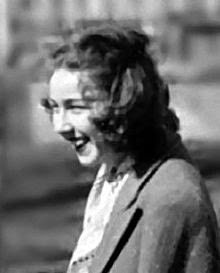 I did a short radio interview today about the Flannery O'Connor art exhibit we're pulling together called "The Meanest of Them Sparkled."  (The show won't debut until June 28, 2914, reception 6 to 10 pm at Thunder-Sky, Inc.; the radio interview comes out in July on WVXU.)

Last night I started jotting down reasons why﻿ we want to do a show featuring Flannery's work, and basically it's because I love her and everything she stands for, and by "everything she stands for" I guess I mean her strangeness, her devotion to her religion, her curt, sardonic authorial voice, her mean-spirited yet somehow life-giving sense of grace -- just her, as a figment of my imagination as well as a figure in literature that never really has been replicated.  She was a devout Catholic in the Bible-belt south; she was a person with a disability staring death straight in face and making serious jokes at her typewriter daily.  She raised peacocks.
All of that seems to dictate some kind of respect that would eventually end up transforming into tribute.
I'm reminded Raymond's strangeness too, of his devotion to his way of seeing the world, of his serious jokes in the face of absurdity and desolation.  (Read through some of the captions he installed on his drawings, and you'll see what I mean:  www.raymondthundersky.org.)
Her writing has the crystal clarity of a how-to guide merged with the slam-dunk poetry of someone who does not ever mess around.  Her metaphors and similes and other devices aren't devices or tricks as much as necessary portals.  And when she writes about evil she does it with a sense of both dread and the capacity to know what evils feels and tastes like.  The Misfit in "A Good Man Is Hard to Find" is a fine example.  He's all black-hatted, sun-burnt sinew and bone, but also jovial, even respectful, in a snaky, sweet manner that's disgusting and seductive simultaneously.  And the counterpoint to The Misfit's evil, the Grandmother, is a fluttering dimwit who somehow in the end rises up from her own ashes to show us what "good" truly is. There are moments in "A Good Man Is Hard to Find" that are hilarious and there are moments that are horrifying, and all those moments often intermingle into art that goes beyond being art, into a realm of faith or philosophy or whatever, without losing a sense of groundedness, of precision based on the need to make something live beyond what it is.
Flannery was an outsider artist.  One of the greatest.  Spinning her tales from her porch at Andalusia Farm in Milledgeville, Georgia, putting up with her mother's stupid questions, listening to her peafowl scream across the hills, their feathered tails exploding into lush plumage and  reasons to live.
We've invited 16 really great artists to take on Flannery's universe, and to use it to inspire visions.  Cannot wait to see the results.
Posted by Keith at 12:12 PM No comments: