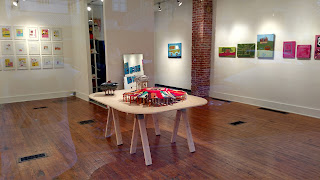 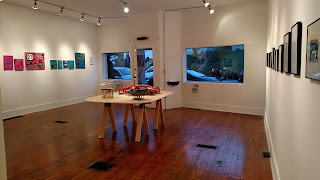 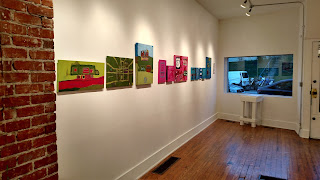 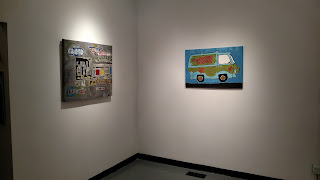 We just opened a show called "Otherwise" last night, and it was a blast.  Down in the basement was a fundraiser for Planned Parenthood, the ACLU, and Southern Poverty Law Center.  The joint was packed.  What I want to concentrate on though is the "Otherwise" show, which presented works by Keith Benjamin, Ben Clark, and Richard Emery Nicksolson.  It was so much fun installing and organizing their works together that it felt as through all 3 gentlemen had worked on being in an exhibit together without actually know it, like they'd combined their visions into a perfect puzzle we could solve.

We stumbled across Ben Clark's work at InsideOut Studio in Hamilton, Ohio, last year; it's a storefront space downtown that houses both a gallery and a studio for artists with developmental disabilities.  As soon as we saw Ben's work we knew we'd need to figure out a show.  I'd seen Keith's work in shows at PAC Gallery and the Carnegie, and Bill had reached out to Richard, who was his drawing professor back in the 80s at John Herron School of Art in Indianapolis.

Richard's stark, perfect renderings of smokestacks, cranes and sky-wires have such an intense precision they read like imaginary movie stills, cinematic moments frozen into pen-and-ink telepathy. Keith's gorgeously and deceptively simple sculptures pull together tossed-aside materials like torn t-shirts and commercial packaging and rearrange and repurpose those things into objects that feel almost on the edge of utility but somehow find a poetic escape from it. Ben's paintings combine both Richard's intense connection to atmosphere and scenery with Keith's nervy, heightened appropriation of everyday objects; he creates totems from road signs, myth from strip malls and maps.

Inside "Otherwise," you go from a minimalist, frenetic drawing of the Scooby-Doo gang's "Mystery Machine" to an almost sinister smokestack vibrating against a stark white sky, to a fresh, smooth wooden table covered in what appear to be delicate nostalgic maquettes of dream buildings constructed from stuff you find in your basement on a rainy day.

All of the art in the show has a classy handmade/homemade aesthetic to it; all three artists have accomplished their missions by paying close attention to what's already there and transforming it all into a beautiful kind of strangeness.