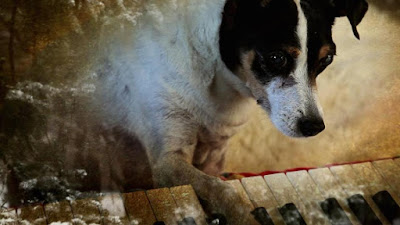 I bought Big Science by Laurie Anderson (LP version, not CD or cassette) with money from one of my first paychecks from Kentucky Fried Chicken.  At sixteen, I was entranced by her music and her image after serendipitously seeing a video of "O Superman" one winter evening on some late-night cable basement TV show.  That light emanating from her mouth, that electric-bolt style of hairdo, that voice, oh that technocratic-lady voice.  The synthesizer sadness of it all is what truly got me though:  there was a hook there, a pop-song need to please, and yet Anderson never escaped her own beautiful, repetitiously mournful pretentiousness, her need not to please.  Every song on Big Science opened up new little doors inside a melancholy/psychotic dollhouse; it became the soundtrack of my high school years.  I returned to it over and over, trying to figure out what I was supposed to do with myself, and then most of the time I would just give up and luxuriate in the big strange universe Anderson conjured, constantly edified by the sarcastic sincerity of her voice, her way.

I've seen her a couple of times live, and still that same feeling comes through.  She's all-out, balls-out art-school-precious, but also there is a mean-spirited and wild blankness to her delivery that counteracts that preciousness.  It's that off-kilter meanness that blossoms into her sense of humor too.  Her music and writing brim with self-deprecation and moral wiliness; when she's not meditating on something serious, she's pulling the mask off her own seriousness:

I turned the corner in Soho today and
someone
Looked right at me and said:  Oh no!  Another Laurie Anderson clone!

That's from "Talk Normal," a little ditty off her 1986 album Home of the Brave, a jaunty, funky hot mess of songs and ideas and jokes that gives off a toxic glow, while also somehow summoning the smell of suntan lotion being applied on the beach.

Anderson is a mixed bag of greatness, a clone of herself, and a sort of touchstone I'm glad is there.  Without her, I wouldn't be the same.  The world wouldn't be.

And so last night I watched her 2015 movie Heart of a Dog, and I was completely floored.  A documentary that loops around itself, meditation into riddle into sidebar into punchline into philosophy, the movie is a sort of Laurie Anderson manifesto after the fact.  And the whole shebang hinges on her love of her dog Lolabelle, a little terrier who passes away and yet leaves such a distinct impression I'm still kind of reeling from the experience of witnessing Anderson's total love and aesthetic devotion to her.

Heart of a Dog in short is a masterpiece of seriousness of purpose, of intent, of mode and mission.  A cinematic hodgepodge of thoughts and feelings, drawings and mood music, texts and poems, the movie captures what it means to be a human being in all of this shit by investing all its intentions in the spirit and image of a dear little dog.  While that sounds a little twee I'm sure, it's really all we've got to go on, if you get right down to it.  Loving someone, something, that's beyond your scope of comprehension, and yet returns that love with an intensity and grace beyond any understanding.  That's Lolabelle in a nutshell.  That's Heart of a Dog.

Anderson's narrative voice in the movie is the same as the narrative voice in Big Science, thank God.  Cartoonishly erudite, a little too full of itself and careful, it has a cadence and tone that turns musical in one moment and caustically cautious the next.  It's like coming home.
Posted by Keith at 12:11 PM No comments:

I'll Stick with You Baby for a Thousand Years 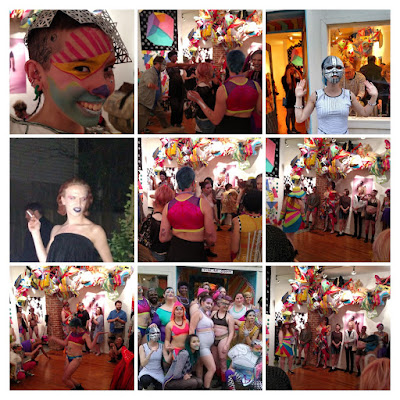 Last Friday, April 29, 2016, we hosted a great big extravaganza at Thunder-Sky, Inc. that allowed me to understand better why we keep doing Thunder-Sky, Inc.  Upstairs it was "Radically Visible," a fashion-show/danceathon/performance-art-glitter-fest, with Sky Cubacub, Lindsey Whittle, Antonio Adams, and Craig Matis all delivering the goods in the form of neon-colored fashion, ecstatic make-up, big gaudy collages, gloriously stylized poster-sized photos, and the kind of energy that helps you to re-invigorate what you want not only out of art, but out of life.  It was like an extended funky parade all night, all that electricity boxed in and vibrant and burning in all directions, and by the end, when everyone was dancing and carrying on, the floor felt like it was about to collapse.  That almost collapse is what "Radically Visible" was truly about, a beautiful crew of artists and models and everyday people blending into one big bombastic moment when snobbery and skepticism leave the room to go sit outside in their cars, and vision replaces judgement:  all feeling, walls and floor shaking like a kite blown around by wind.  All smiles, sweat, and silliness.  You don't need anything else sometimes.

And then downstairs we were doing a David Bowie tribute (curated by Emily Brandehoff) that pulled together over 40 or so artists' visions of what Bowie meant, our basement wall-to-walled with interpretations of his greatness.  Crayon drawings right next to oil paintings, conceptual found objects situated with upfront portraits of the artist as he was, as he wanted to be.  Bowie's world was about being radical and visible too, of course; he was always in search of some otherworld to replace the glum, phony one we're all usually stuck with.

We karaoked the hell out of some of his greatest songs in that basement.  And as I screamed out the lyrics to "Golden Years," I felt somehow vindicated, although I really didn't understand the point of the vindication outside of the fact that we are keeping Raymond alive in the humblest of ways, dedicating art and time to his memory, archiving almost everything he left behind:  Raymond Thunder-Sky, urban legend and Cincinnati curiosity transforming year by year into mythological god and mentor.  And mid-song, my lungs burning from me trying to imitate Bowie's angelic/demonic baritone, I realized I was staring up at the shelves holding Ray's toolboxes, all those toolboxes he carried around town as he rode buses to get to demolition sites so he could draw them.  Those metal and plastic boxes contained his drawing supplies, candy, photographs, pieces of his ongoing clown costumes...

Everything we do here celebrates the triumph of his strangeness, the rigor of his freakishness.

I'll stick with you baby or a thousand years
Nothing's gonna touch you in these golden years... 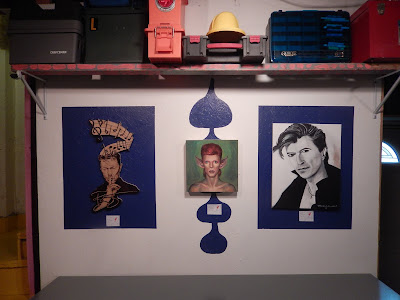