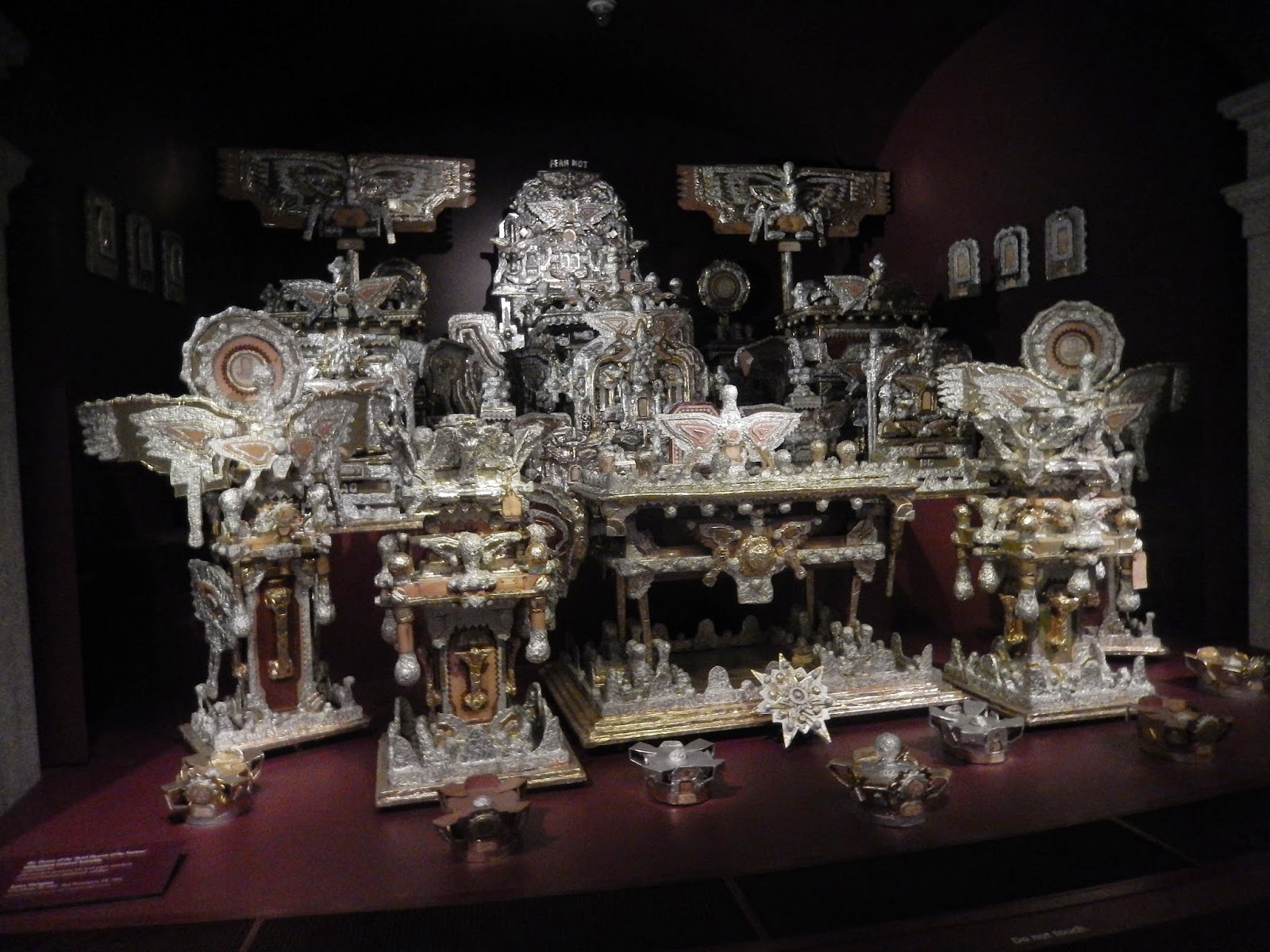 Last weekend I got to go to the Smithsonian Museum of American Art in Washington DC.  This is what I thought about it all:

James Hampton died in 1964. He was a janitor and an artist, and his major work, The Throne of the Third Heaven of the Nations' Millennium General Assembly, is one of those astounding pieces of art that has to be seen to be felt and understood, although "felt" and "understood" are somehow interchangeable here when you witness the glory of Hampton's dedication, his secret devotion to what he believed, what he needed to do because of that belief probably just to get by day after day, night after night. Constructed from trash he would save from the dumpster (old light bulbs, pieces of foil, old furniture, wood scrap, and so on), The Throne has an interstellar heft to it, a set-design chic that somehow allows you to fall into its sumptuousness, to uncurl into that luxury culled from the trash-heap, and yet also the scene Hampton depicts is a sort of tone-poem to the way Hampton understood and felt passages from the Bible. It's art toying with functionality but the functionality serves some mysterious purpose beyond worship and therapy and even beyond creativity and intelligence. It's mystically significant, something that can't really be said about a lot of modern or contemporary art, and yet it also has a workmanlike quality to it too, a bold, no-nonsense theatricality that compels you into wanting to enter a dream-state that is both junkyard and deliverance. That mix of throwaway and grandeur, of loveliness and crap, is what makes Hampton's Throne not really the work of an outsider or an insider artist, but of an artist trying to decode what poetry and belief can mean once you transmorgrify daily life into spiritual significance. Hampton was a janitor/ecclesiast who found his way through life by absorbing its debris and re-interpreting it into bliss. 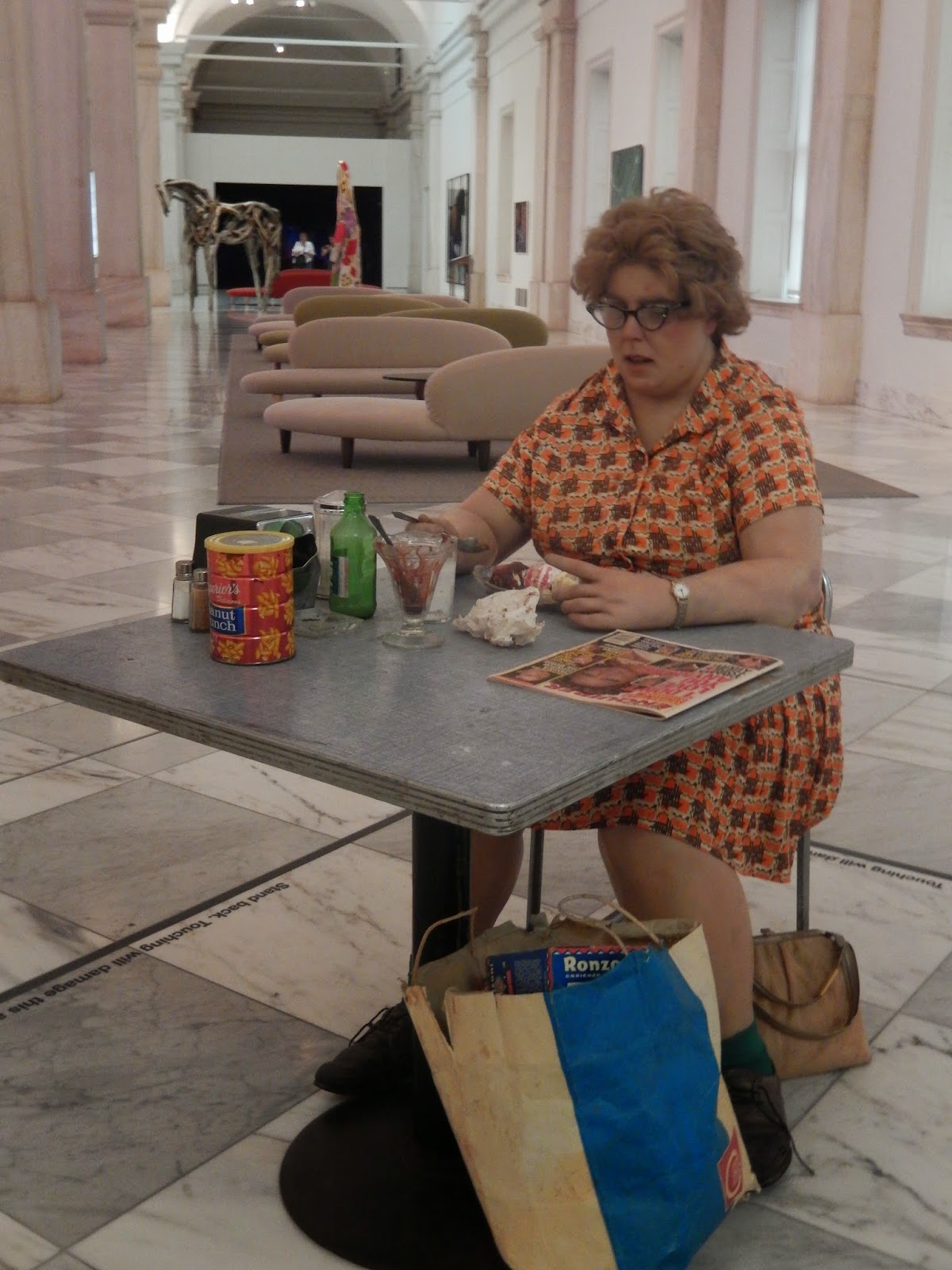 Duane Hanson (who sculpture is above) might be Hampton's opposite.  He takes the materials that creates debris (fiberglass, Bondo, resin, etc) and uses them to give us waxworks figures from daily life, often with a grotesque flourish.  His Woman Eating from 1971 is made from polyester resin, fiberglass, and polychromed in oil paint, decorated with clothes, table, chair and accessories from a thriftstore.  The overall effect is of cynicism burnished into voyeurism, a sort of blank stare that collapses on itself and parodies the way you see strangers not as forms of yourself, but as complete and total "other."  When I look at this woman I don't feel empathy or compassion or anything, just a dull vibration, a creepy little laugh going off like a smoke-bomb inside my head.  Maybe Hanson's intent was to be a 3-D practitioner of Diane Arbus's sense of alienation and connection to freaks, but this "tribute" here is more like a mock-up for a bad early 80s SNL skit, a character that isn't a character but a compilation of bad habits and bad genes.  There's nothing interesting here.  All that attention to detail that might sometimes have a sort of kinky aftertaste (Jeff Koons is all about that) here leaves no taste at all, just dead air, a corpse propped up and going through a scene in a really stupid movie.

That same feeling of cynicism and horror is what Philip Guston's "abstract" painting (pictured below) investigates in a way that launches into nightmare and joy.  Guston's evil little nest here is a parody of Abstract Expressionism that somehow out-expresses the target of the joke.  There's a kindness built into his assault, a need to find grimy little angels, sort of like a Chagall painting that has turned melty after a house fire.  I kept staring and staring at this thing, and it was just a revelation, the webby tones and oddness, the smears and crooked little lines, those bleeding-newspaper and crumbling-brick colors, all of it cascading into nothingness and then back out toward image.  A masterpiece. 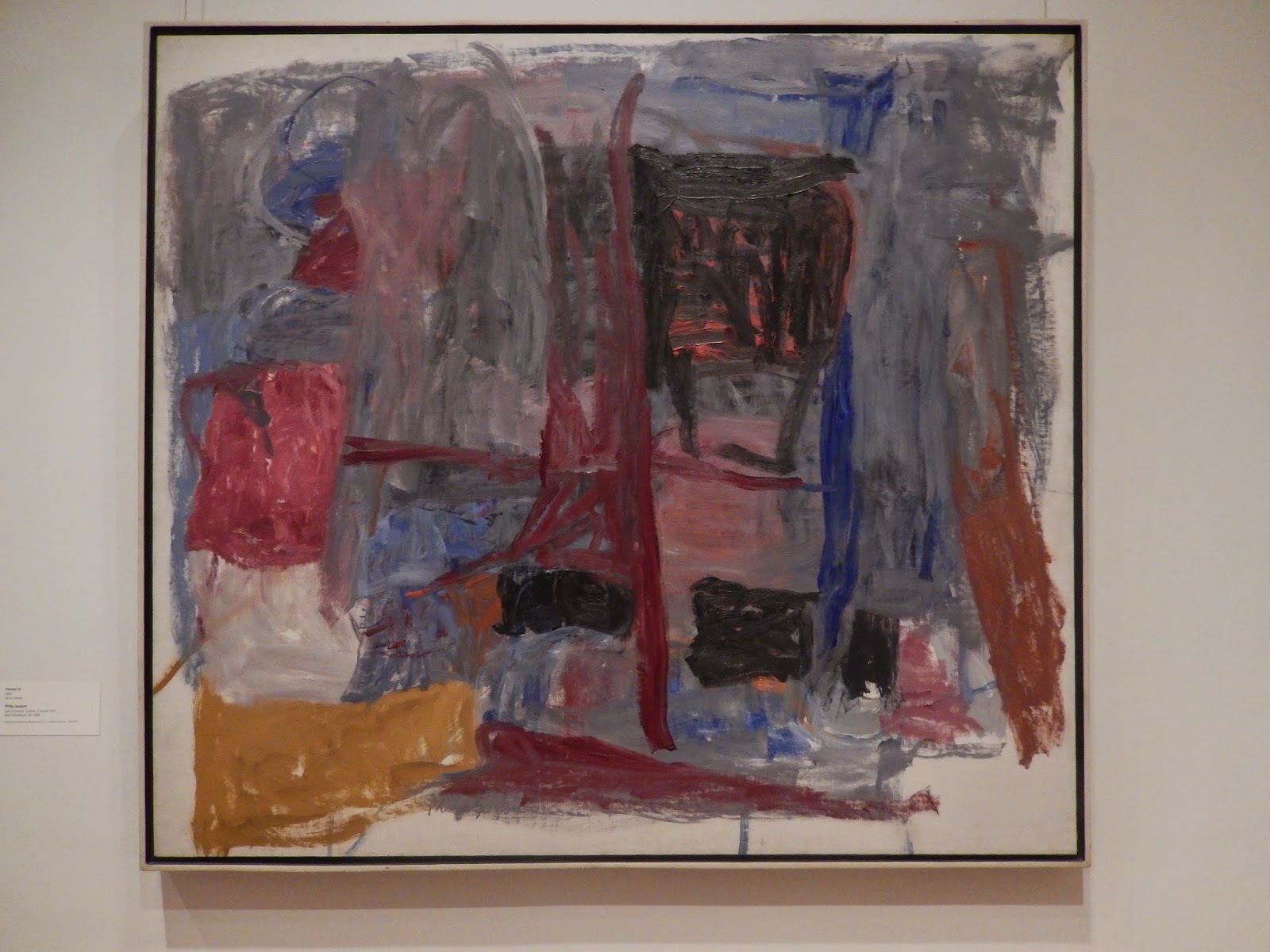 And finally, Robert' Rauschenberg's "Reservoir," a piece I have always wanted to see in person.  It's one of those totem-poles inside my head; I've seen it in books and magazines, and I've always loved its simplicity and elegance, and yet also its brute stupidity.  That lame-brained greatness is given force and verve and significance here because of Rauschenberg's skill at editing and combining.  If Hampton is trying to create a palace, Rauschenberg is trying to make a celestial shotgun shack, and there's music and laughter spilling out of every little fucked-up room.  The clocks make a mockery of time, the paint a mockery of painting, and the wooden embellishments and dirty clothes stuccoed to the surface remind you of the day after a disaster, a grim sense of hope that no matter what has happened there's always proof of something after, clues to escaping tragedy by staring it right smackdab in the face. 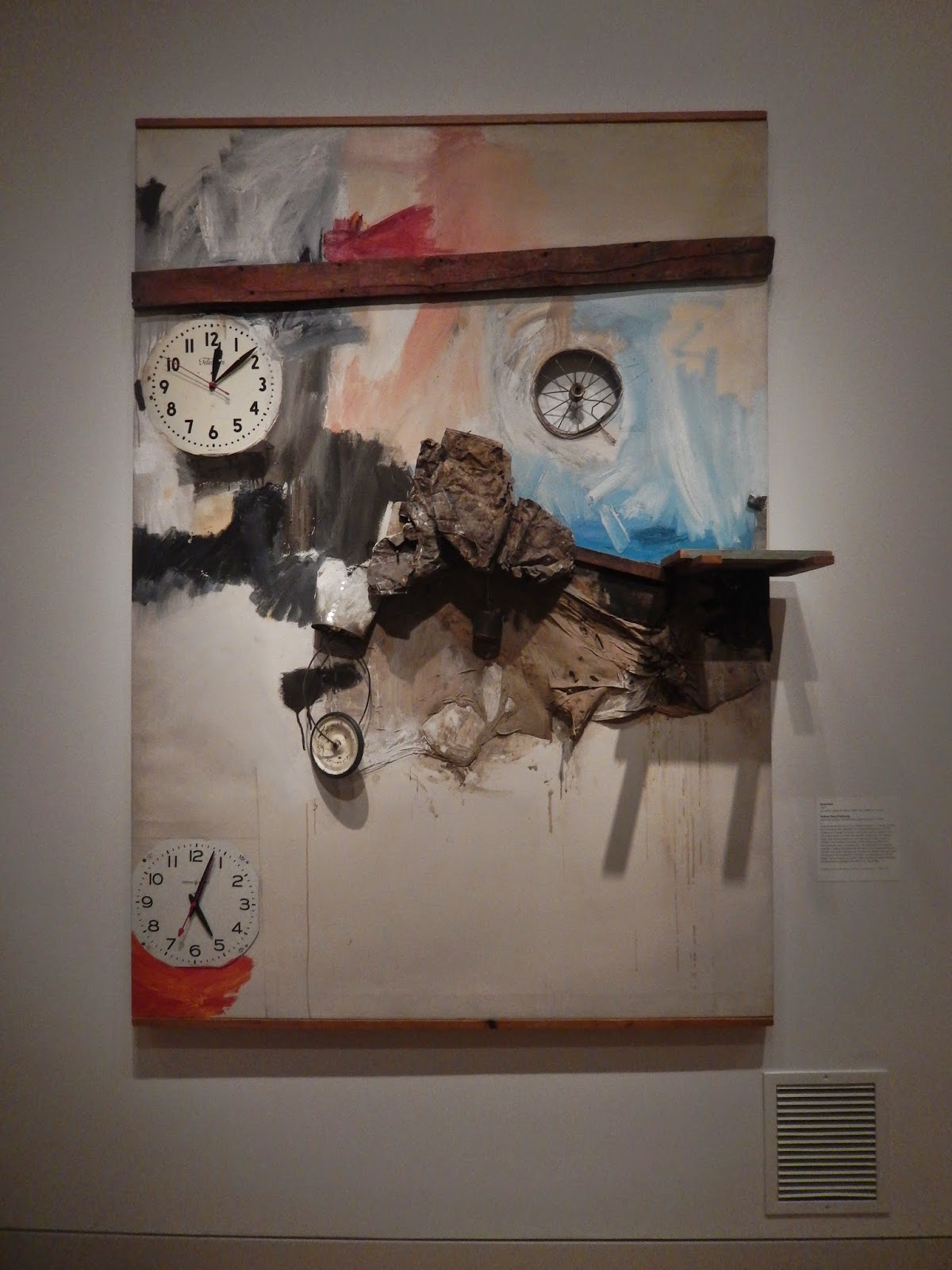