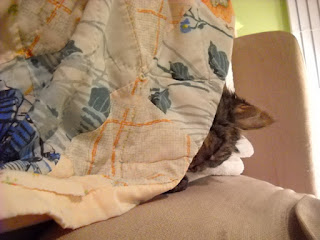 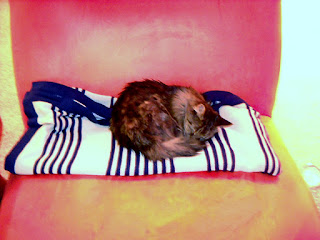 Sometimes I'd pick up Vickie, our cat, and tell her, "I don't know what I'm going to do when you die." It was kind of a joke to show that I wasn't sentimental.  That I wasn't one of those "cat people" who think their pets are their babies.

Beyond being unsentimental, though, I needed to make a joke of the situation because it was the truth more-than-likely.  And it turned out to be yesterday. We took Vick to the vet.  She was blind and her back legs were paralyzed.   Something neurological, the vet said.  She was 17.  Always a skinny wild baby freak, she got precious as she grew old -- so precious that she went from furious snapper if you touched her the wrong way to lap cat purring instantaneously if you picked her up.  That transformation happened quickly, and she was like that for the last year or so.  It was as if she had found a way to understand what dying is by becoming the sweetest thing on earth so she could leave it on good terms.

Before we took her to the vet I was upstairs brushing my teeth and I just started bawling.  I mean it was like a force of nature.  I felt like that little kid in Terms of Endearment when he goes in to say goodbye to Debra Winger.

Then the vet injected Vick, and she was gone, on a white towel in the examining room.  It was cold as hell yesterday, and we took the basket and towels we brought her in back out to the van.  Went to Cracker Barrel, because (keep those jokes coming) that's where Vick would have wanted to go.  We always characterized her as pure white-trash, but lovingly so, as we are too.  She was born in a factory in Hamilton, Ohio.

She used to run out the back door and over the back yard fence, up to a neighbor's pool.  Whenever we wanted to find her when she ran off, we knew she'd be up there suntanning by the pool.  Bumming cigarettes from people.  Wanting a margarita.

I know I'm being sentimental and I should tell myself a lot of stupid jokes about cat-people and their eccentricities, but you know what?  I'm a cat person.  I loved that little stupid thing.  17 years knowing her.  It was like time dying somehow right in front of you.

One more thing:  she got really hungry as she got old and precious and sweet.  She ate like a pig but lost weight.  She would eat her food every day like it was her last meal.  God help anybody who got in her way.
Posted by Keith at 4:58 PM No comments: 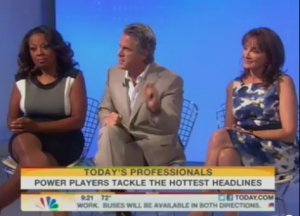 Star Jones, Danny Deutsch and Dr. Nancy Snyderman get on my nerves.  They comprise a segment on the Today Show called "Today's Professionals," which basically is a three-minute-or-so group-rant that makes the three of them come off like a tri-headed hydra.  A moderator hurls "headlines" at them and they state the obvious in a fashion that makes you feel like you are at a party full of starchy, big-mouthed, arrogant fools masquerading as The Supreme Zeitgeist.
Jones especially is hilarious. In one segment the moderator showed a clip from an anti-child-obesity ad campaign, and that gave Jones the inspiration to go all evangelical about her past struggles with weight gain and shame.  But with Jones (and the other two) it's not the freshness of the message that matters, as much as the peacock-in-full-splendor delivery of it.  In other words, Jones was only stating the obvious ("I was once morbidly obese, and now I'm not, so I know a thing or two about childhood obesity thank you very much"), but she did so with such horrible over-the-top aplomb it made me feel like I was in the presence of  someone doing a parody without knowing it.  She doesn't seem to have that interior voice many of us are blessed with, the one that allows us to know we are full of crap.  Without it her "professionalism" becomes a megaphone for whatever she thinks people will find "stimulating."  She's the crazy sherriff of Water-Cooler-Moment County.
All three utilize that special egotistical panache often associated with the word "professional." They sit in high-chairs like pedigreed babies and/or 16th Century Royalty spouting off bromides in a resplendence born of privilege and more than a little vanity.  They do all this pontificating in a safe and scolding manner, like Fox News merged with Old-school Phil Donahue.  My favorite moment so far with "Today's Professionals" was yesterday when the three were shown a clip of that new black and white and very boring Casey Anthony You-Tube video.  Blond and sporting the librarian look, Anthony sits in front of her web-cam and talks about herself and her dog and herself.  "Today's Professionals" went rabid on that acquitted murderer's ass.  They diagnosed her as a sociopath and a narcissist and they just wanted to never see her again!  That triple-rant went on for what felt like an eternity.  Good use of a doctor, a lawyer and an ad executive's very expensive and very precious billable time.
"Professionalism" can be a word attached to any endeavor you choose.  In this case, all their degrees and experience are being used to create a Board of Directors for a lynch mob.  The main theme of the Anthony rant was that this woman is out of the public eye, let's keep it that way, but she just put a video up on You-Tube so we better take advantage of that while we can.  The triple-headed Cerberus loves barking at the gates of hell, and then it's onto another segment about how men are biologically programmed to cheat and women are biologically programmed to put up with it.
Welcome to 2012 everybody.
Posted by Keith at 6:14 AM 1 comment:

This is from a blog post Aaron Betsky, the Cincinnati Art Museum Director, wrote concerning "The Collections:  6,000 Years of Art," a big new exhibit at the CAM:

"The one issue that will not be addressed through these additions is whether these new displays treat the works of art with appropriate respect. The Schmidlapp Gallery turns each work into an icon, and in so doing removes it from the historical context in which most art museums (including this one) usually show such artifacts. In The Collections, the opposite happens: you have to look at what we think is an important work of art without many of the usual framing devices. For us, the questions both of these approaches, as well as some of the others we will be unveiling over the next year or two, raise get to the point of what an art museum does: at least in part, it makes the artifact into what we think of as a work of art through the way it displays that object or image. By varying how we do that, we want you to be aware of that process, and maybe even to be part of it."

Beautiful things to think about.

When you are in the thick of the exhibit, confronted with the "salon-style" onslaught of paintings and objects in "The Collections," meaning gets twisted out of itself until all you have left is stuff.  For the most part it is beautiful and interesting stuff, but stuff none-the-less.  Pictures and objects get summarily delegitimized through this process of egalitarian chic, and yet they also become somehow more sympathetic, more of this earth, to the point you start thinking about how much money these things cost, and why are/were these things worthy of museum-ness in the first place?  Just because they're here doesn't mean they mean anything.  That's kind of what this "hot mess" tactic of display shows us, and I'm happy about that.  The honesty Betsky is extolling is worth a little brain time.  It seems like he's deconstructing the institution he is in charge of.  Good for him.

Museums. churches, universities, and other institutions that are in charge of delivering meaning to us can often ossify into palaces ran by emperors with no clothes.  "The Collections" at its very core is allowing us to reconsider that hierarchy thoroughly and without a lot of drama.  The Schmidlapp Gallery becomes a cosmic, epistemological Salvation Army Store.  I felt both inundated with objects and somehow set free from their preconditioned purposes and attractions.  The one painting that makes its way out of the mess most distinctively (for me at least) is Phillip Guston's magnificent mean-spirited celebration of creepiness.  It has the vibrant stasis of a concussion taking place inside an overdecorated dream. 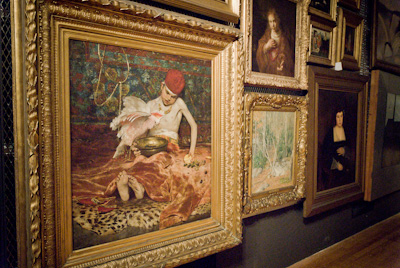 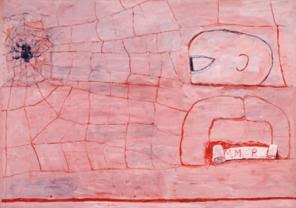