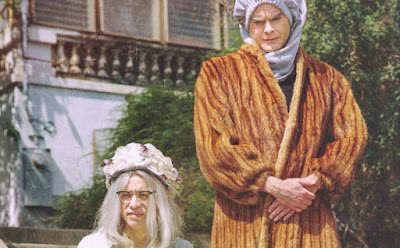 There's a glut of comedy sketch shows on TV right now (Inside Amy, Key and Peele, Drunk History, and so on), and some of these shows are funny-haha, some funny-weird, and many are funny-not.  I would have to describe the first installment of Documentary Now, the new half-hour gig on IFC cooked up by Saturday Night Live veterans Seth Meyers, Fred Armisen and Bill Hader as a combination of all three of those categories, but what wins out in the end is definitely funny-not.

First off, I love Fred Armisen.  He has a mask-like face that registers stupidity and confusion without having to move a muscle, and he deploys that plastic expression throughout most of his impressions, giving each bit of mockery he does a sort of Armisen through-line that makes it all hilariously precise and also broad enough to be slapstick.  I don't think I've ever laughed harder at him that earlier this year on the premiere episode of one of his other sketch comedy shows Portlandia, which just finished up its fifth season.  The premiere segment featured the back-story of the owners of Women and Women First, a feminist bookstore, and Armisen played Candace, a stodgy, judgmental, hilariously un-self-aware activist, as she was in the early 90s, a sexed-up, man-hungry, careerist tiger-lady in beautifully garish power skirt and pant outfits, prowling the halls of Big Business, just itching for a fight or a fuck.  That same dim but feverish face attached to that early-90s sense of what it means to be a glass-ceiling-buster was so hilarious because it was both parody and paean, over-the-top and yet sensitive enough to give Candace a break:  she's a broken, dimwitted icon, but she's a goddamn icon none-the-less.

Documentary Now's premiere episode features a sendup of Grey Gardens, the 1975 documentary about Edith Beale and her daughter Edith who live in the Hamptons in a haunted house.  Titled Sandy Passage, the mockumentary goes through the motions, with Hader playing the daughter and Armisen playing the mom, and at first you feel warm about it all, that the mockers are somehow enchanted by what's being mocked and we're in for great strangeness fortified by camp and homage.  For about five minutes, it is all that, with Hader and Armisen riffing on all the many idiosyncrasies involved:  the rotten-wood house, the raccoons, cats and possums who have taken over, the sweatpants turban, the poetic trash of lives lost in doldrums and regrets...  Making fun of how the original movie looks and feels (the Maysles brothers original is a desperately sincere affair, but that only makes the camp of it exquisite and heart-breaking and kind of comforting) is easy to do of course, and fun, but not really that funny.  Grey Garden's unique sensibility allows it to self-parody, thanks especially to Little Edie, who has a knowing countenance and glare every time she seems to be feeling she's being exploited.  In fact, her performance in Grey Gardens is truly a performance.  All the sad/creepy clothes she wears, the affectations she uses to express herself, that beautiful American flag-waving dance she does, all of that artifice, even if it is innocent and completely self-imposed, is completely controlled by her sense of decorum and ego.  So mocking all of that is shooting little Edies in a barrel so to speak, and Hader does so with his usual smattering of otherworldly intonations and stares.  Armisen takes on Big Edie with the same aplomb, giving us a slowed-down, stupider version, but also entering Big Edie into his personal wax-museum of freaks, right up there with Candace and the stolid Native American comedian he'd do on Weekend Update, sitting next to Anchorman Seth Meyers, who happens to be the writer and producer of Documentary Now.

Meyers, I think, is the main reason that Sandy Passage is funny-not.  It's the narrative.  After the initial and obligatory scene-setting and mockery, the story of Sandy Passage takes a turn into Blair Witch territory, turning the house and the ladies in it into "pure horror," both Edies suddenly turning into grocery-store-delivery-boys-killing witches.  Grey Gardens definitely never wanted to go to that place Sandy Passages seems intent on going.  Even while flirting with the gothic grotesqueries confronting them, the Maysles brothers were intent on both capturing the horror and the swetness.  In fact both constantly intermingle.

It's just too easy to imagine Edie and Edie as malevolent forces, their story as witchy and horrible.  It's a frat-boy take on something a frat-boy could never understand.  Why go there?  I guess for the laugh, but it's not funny, it's just dumb, in the way all lazy easy satire is:  taking a situation that's sad and pathetic and layering on horror-movie kitsch only makes the show feel amateurish at best, and kind of hateful and phobic at the worst.

Edie and Edie's story is about surviving but also about caving in, about pride and sloth and lost chances and ego, but by the end of Grey Gardens there's definitely a sense that both Edies are in on the joke.  In the end, watching Sandy Passage, you truly get the sense that parodying Grey Gardens, without understanding its essence and power, is the ultimate in redundancy, and even the ultimate in disrespect. 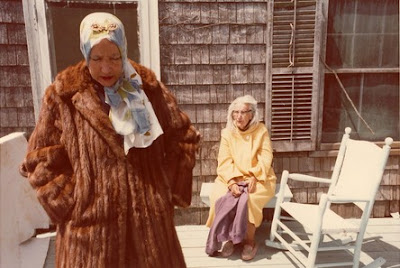 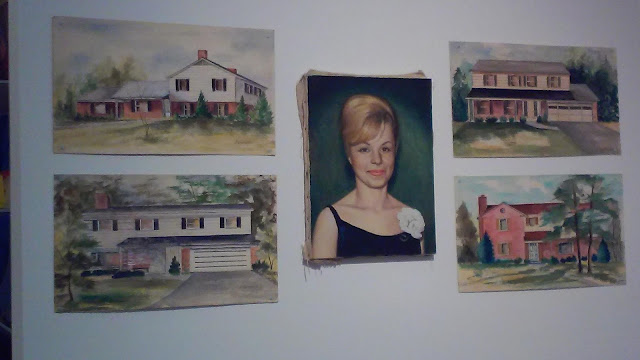 Monday night, we started with this little ensemble when looking at how to curate "The Goodwill Biennial," the next gig on deck for Thunder-Sky, Inc.  It's a parody of contemporary art-survey biennials across the world, using donated paintings, sculptures, whatever given to the Ohio Valley Goodwill here in Cincinnati as the starting point of a jurying process that includes me, Bill Ross, Matt Distel, Merry Hoefle, Melanie Derrick, Emily Brandehoff, and Antonio Adams.   Parodying something as pretentious and serious as a "biennial" is kind of a silly prospect of course, close to shooting million-dollar fish in a million-dollar barrel:  those who pursue the biennial lifestyle of course don't give a crap, and those who don't give a crap really don't care.  But still satirizing something so contrived and so integral to the way serious art business often gets done (or doesn't get done) gives us a chance to worship at the altar of Pure and Gorgeous Serendipity, as well as the sad and blurry cathedral of Musty-Smelling Ghostliness.
That's definitely the vibe when unpacking donated art:  that mildew-enflamed fume, that sad sweet grandma-doesn't-live-here-anymore vapor.  In fact, those delicate, precise, dreamy watercolors of 1960s suburban homes surrounded in trees and sunshine had to be unpacked from a mysterious blue suitcase filled with old sketches and photos and prints someone had stuffed into it and locked up tight and sent on its merry way.  That blue suitcase mustiness was an entrance into memory, kind of like the marmalade on the cracker moment Proust went on and on and on about.  Those drawings have such a tenderness, such a nostalgia, and then Matt located the centrifuge of this whole vortex by grabbing the portrait in the center from off the floor, and there she was:  Nancy Kincaide, a name we all brainstormed into being.  She was a realtor, a murderess, a vindictive socialite and so on.  The painting itself is green and heavy and small, and Nancy's countenance both regal and also beautifully come-hither.  By juxtaposing the houses with her circumspect portrait Matt intentionally created a tableau that is easily understood but vast with mystery, story after story spilling out of those dark windows, those water-color driveways.
And that's kind of what the whole show is about, dislocating kitsch from all those tossed-aside, handmade objects and finding a way to take seriously what was recently in a canvas bin inside a large warehouse in Woodlawn.  Thankfully all the Goodwill staff were game, and thankfully we have some likeminded souls helping us find our way through.  But the sentiment is serious, and as we juxtaposed and figured out where things went on Monday night it all became a little emotional, in the way maybe you might feel helping people escape from a prison-camp:  there's an odd and kind of exhilarating freedom to reconfiguring what destiny has tried to create and sustain.  This stuff was supposed to be either thrown away or tagged and put on a shelf, and here we were thinking about it, playing with it, introducing ourselves to it in a way that wasn't about anything other than making some kind of moment, or series of moments, happen.  That's the ecstasy of pure aesthetics right there, taking what's trashed and forgotten and un-trashing it and remembering it in such a way that poetry and a little bliss coalesce, appear and then disappear.
Nancy Kincaide wholeheartedly agrees.  Just ask her.
﻿
Posted by Keith at 8:37 AM No comments: