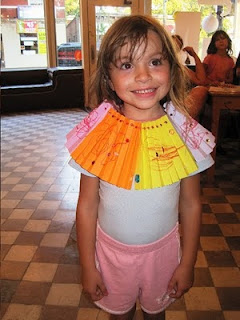 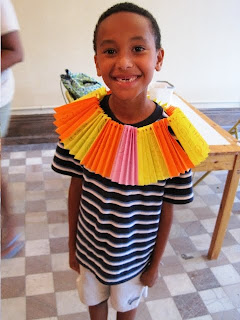 Happen, Inc. has sponsored Raymond-related art-making workshops at their studio in Northside the past couple weeks, preparing for the Raymond Thunder-Sky Folk Art Carnival happening Sept 25 and 26, 2010, at Building Value in Northside (4040 Spring Grove, Cincy, OH 45223).  One of the activities was helping the kids make their own official clown-collars.  Look at their faces.  Amazing.  One of Raymond's beautiful eccentricities becomes a great project.  The ultimate 2 + 2 = 5.﻿
Posted by Keith at 1:50 PM No comments: 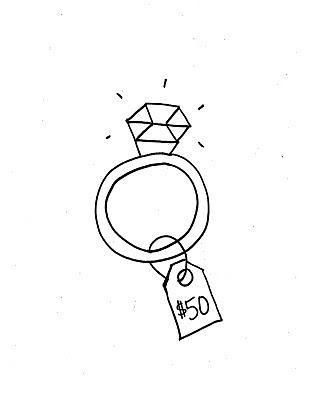 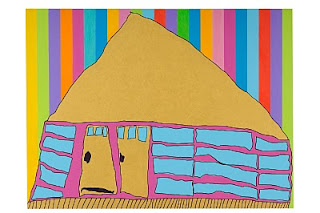 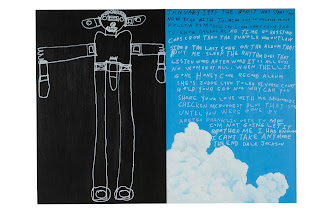 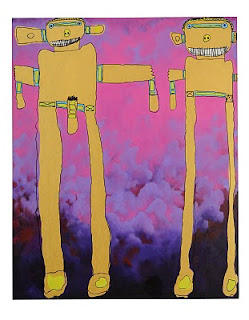 Thunder-Sky, Inc. Cofounder Bill Ross answers three questions about making art with the late, great Donald Henry. There's a retrospective of Donald's solo works opening September 30, 2010, at Northern Kentucky University. Some of the paintings Donald and Bill did together (three of which are pictured above) were exhibited last month at 1305 Gallery in Bill's show, "Paradise," and many others will be exhibited in 2011 at Thunder-Sky, Inc.

When and how did you meet Donald Henry? I was first made aware of Donald and his work after the success of the Art Thing show in 2001. A work friend Sue Anne Krause who was working with Donald at the time brought in a batch of his drawings to our office to see what I thought. I was amazed. I then met him at the workshop he attended. And I eventually assisted Donald in being able to attend Visionaries & Voices instead of the sheltered workshop he was at.

What was it like collaborating with him? Collaborating with him was a great experience. I got to understand firsthand what it was he was after in his work when he was willing to collaborate. Some days I could just tell he wasn’t in the mood to put up with my excitement. When he was interested in working with me he would be intense but happy, sometimes he would dance a little in the middle of doing a powerful drawing. His face would just radiate with this stubborn joy. I am so glad I was able to have that experience of adding color to his line.

What does his work mean to you? Like Raymond Thunder-Sky, Donald’s work was intentional. It was his way of saying “I was here”. He sought out to capture in line and in color the need for permanence of those he cared about and the places he longed to be. He was able to reveal his true self in knowing what he wanted to do as artist. He was bold and he had authority.
Posted by Keith at 12:01 PM No comments: