The Comeback Is Back 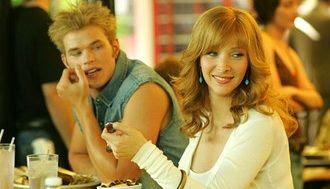 The Comeback was on HBO in 2005 for one season.  It didn't get picked up for another one sadly.  Starring Lisa Kudrow as a second-rate sitcom star kind of like Shelley Long meshed with Kim Cattrall, Comeback uses reality TV as both its target and inspiration, and in that mix of sarcasm and elation finds a strangely beautiful poignancy.  While Cherish is returning to TV after a long (and definitely not self-imposed hiatus) to co-star in a new sub-par situation comedy called Room and Bored, a reality show about her comeback is being filmed, called The Comeback.  While it sounds a little too smart-alecky and high-concept for its own good, The Comeback never loses its zest for both the humiliation of, and a big-hearted respect for, its star, Ms. Cherish.

Lisa Kudrow plays Cherish with an intensity and ease that's charming and disquieting, like a Cindy Sherman photograph stirring to life and dropping the high-art Diane-Arbus pretentiousness for some Waiting for Guffman downhome pizazz.  But Kudrow's performance is not solely about skewering the smarm and phoniness of Hollywood, or even about riffing on Guffman's slightly mean-spirited mockery.  Kudrow's Cherish is an exercise in locating the humanity inside of all the decorum and decoration Cherish uses to set herself apart.  In setpiece after setpiece (including hilariously understated bits like having her reality TV show crew follow Cherish to a department store to take back bedsheets, all the way up to the climactic scene in which cupcake-costumed Cherish punches Room and Bored's bullying head-writer right in the gut), Cherish seems confused by, and aware of, a new consciousness blooming inside her.  As she swims through the humiliation she has signed up for, rushing toward regaining her second-rate celebrity status, Cherish also wants to put a stop to the whole runaway-train of it all by continually calling "time out" to the camera-crew following her.  As The Comeback progresses, Cherish seems to be realizing that her whole life has been, and always will be, an exercise in Celebrity Stockholm Syndrome. The punchline is that she never will be able to escape that creepy, slightly masochistic desire for fame.  She will also never be able to get exactly what she wants.  The only saving grace is that at least she has access (albeit of the D-List vareity) to enough fame, photo-ops and chocolate-fountain parties to keep her occupied.

The Comeback's sense of humor harnesses the age-old powers of puke and dog-shit and public embarrassment for its comedic assault, but its use of scatology and scorn is always about creating a space for the Realness beyond Reality TV to reveal its ugly/beautiful grace.  Kudrow captures that queasy interregnum almost every time she's on-camera.  In fact, her Cherish is an artistic triumph, both a paean to the pretty, prissy school-teacher you want to mock but then bring an apple to, and a satire on the limits of the desire for fame and fortune.  Sometimes you can catch Hillary Clinton in Kudrow's gaze, other times Kathy Lee Gifford and every local TV news anchor-woman, or a nosy neighbor lady peeping at your through a slit in her living-room curtains.  The kaleidoscope of Kudrow's satire, however, eventually becomes stained glass.

And good news:  The Comeback is on Sundance Channel now.  Check your local listings.
Posted by Keith at 11:45 AM No comments: 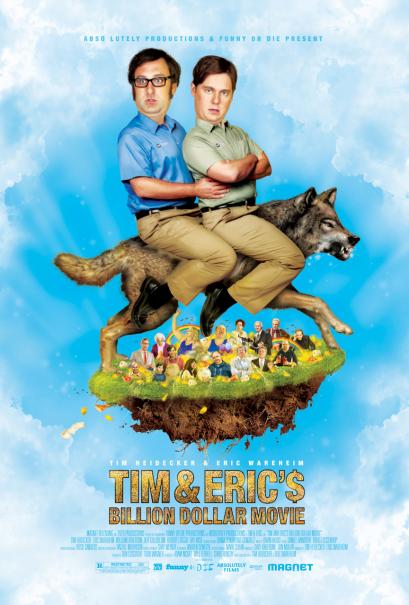 ﻿
The other night I was channel-surfing and stumbled into On-Demand Land, and then found Adult Swim.  On that I discovered "Tim and Eric's Awesome Show Great Job," a series of 12-minute TV shows that cut up and cook together bits and pieces of:
The result is a meth-amphetamine beef stew that is inedibly hilarious, but more than that has the purity, meanness and fuckeduppedness of really great art.  Thanks to Eric and Tim.  Two regular-looking slobs who channel Divine and Chevy Chase simultaneously, merging mediocrity with outlandishness and a high-style need to embarrass themselves and everyone else.

Watched their new movie Tim and Eric's Billion Dollar Movie the other night, after catching the TV show fever.  It's brand new, debuting at the Sundance Film Festival in January.  Most of the audience there at Sundance left the theater before it was over.  But don't you dare.  A masterpiece of poetic horror/comedy/insanity.  John Waters has to be jealous.  The best Will Ferrell movie ever.  And John C. Reily somehow creates a pathetic and poignant character from the sewer/stew everyone else swims in.

God Bless Tom and Eric.  And therefore America.
Posted by Keith at 1:22 PM No comments:

Mike Kelley died this week.  It doesn't matter how or why to me.  It's just fucking sad.


I was thinking about him last week and a couple weeks before.


Last week because we were at the Outsider Art Fair and there were a number of paintings and sculptures that seemed to hum his sick sweet little songs.  A couple weeks before because we're curating this new Thunder-Sky, Inc. show called "Small Potatoes:  Self-Made (and Re-Purposed) Knick-Knacks, Tchtokes, and Other Curiosities."  It's a group show featuring artists who create small sculptures and paintings, intermingled with a collection of "knick-knacks" and "tchtokes" discovered in thrift-stores and other places.


I have been haunting thrift stores here in Southwest Ohio for the last couple weeks (for inspiration and also to pick up some knick-knacks and other crap), and upon entering the first one I felt Kelley's presence emanating through all the objects before me:  stuffed toys, bedspreads, clothes, belts, blenders, computers, all scuffed, worn, blurry, and yet somehow glittering with the meaning of being cast away.


The junk pile was Kelley's cauldron.  And from it he conjured spells that overreached and then transcended their commonplace origins.  He made nightmarish lullabies and plush creepy vignettes that had no way of being categorized outside of themselves.  He seduced with glumness and grit, and made you believe that art has a meaning outside of words and trends and even thoughts.


So "Small Potatoes" is a hymn to him.  A very humble, a very unimportant prayer, but a prayer anyway.

Monsters of the World


I went to the 20th Anniversary Outsider Art Fair last weekend in NYC with friends, and it was a lovely, cleaned-up, curated carnival of an experience.  It was a lot like going to the Folkfest in Atlanta without the folk-artsy "Southern Charm" booths and wares.  All the booths exemplified what "the field" of outsider art has become:  examples of works from programs for artists with disabilities intermingled with "high-end" galleries representing mid-level and higher-level outsider artists.  Lots of gorgeously meandering drawings, flashy expressive paintings, home-made dolls, found-object sculptures.  Etc.
I kept hearing the refrain from the Talking Heads song in my head as I walked through:  "Same as it ever was."  The newness of "outsiderness" has completely worn off, at least for me.  Now everything about the concept has the gleam and gloss of "establishment," an enterprise that has settled into itself and has become what it is supposed to be, and what it will be from now on.
I wasn't bored or outraged by this epiphany.  The experience was completely pleasurable.  I appreciated what the fair was.  I enjoyed the works.  But I also felt my interest slipping away from the concept as a whole.  Putting all these works together under the rubric of "outsider" seems kind of old-hat and a little ersatz now.  Antiquated in a way that can't be addressed through an essay or a symposium.
In the program that accompanied the fair, Critic Edward M. Gomez writes:  "As many of these outsider art admirers regularly point out, there is one inescapable aspect of the most compelling work made by self-taught artists that never fails to seize their imagination.  That is that it is always profoundly, unmistakably, inexplicably moving."  He goes on to paraphrase Jean Dubuffet, the Godfather of all of this stuff:  "Dubuffet insightfully noted that each of these art-makers produced his or her work primarily for himself or herself, not for a broad public and certainly not for the art market or to grab media attention."
Gomez never really gets at the central irony of all this:  celebrating "outsiderness" by celebrating the way it has become celebrated and commodified, when in effect the whole idea was to shield the concept from this inevitable process.  Or at least complicate it some.
We stayed with our friends Andrew Cole and Cathy Dailey in Princeton, NJ and took the train in to see the fair.  Andrew and Cathy are really incredible people.  Cathy is a self-taught artist in her own right, and Andrew is a professor at Princeton.  One night Andrew showed us some drawings from his childhood that his mom had saved for him.  They are incredibly silly and potent renderings of reptiles and outerspace creatures and superheroes, all done on notebook paper and stashed inside a green three-ring binder labeled, "Monsters of the World."
These drawings, to me, were just as exciting as a lot of the stuff I saw at the Outsider Art Fair.  I loved their delicate nostalgic obsessiveness.  Their sweetness.  Knowing Andrew for 20 years also helped.  Something about the intermingling of that self-taught creepiness and knowing the artist in a specific way somehow helps to separate the art you like from the Art World you don't, which is the central problem I think I'm trying to get at.  When outsider art becomes a part of the everyday world, the intimacy becomes commodified.  The stories behind its making evaporate into aphorisms and appraisals.  But those childhood drawings of Andrew's have an authenticity and a preciosuness I can champion without feeling like a douche-bag art critic; they are fun to look at and were produced because of a need to sanctify the delirious love of dinosaurs and lazer beams. Period.  My pleasure at their creation is fortified by the fact that these works were made not to be seen but to be collected in a three-ring binder dream-bible hidden under a little kid's bed.
That same sort of sanctification happens in Dean Millian's work above.  He makes animal sculptures out of aluminum foil, and his work (supported by LAND Gallery, a program for artists with developmental disabilities in Brooklyn) was the best stuff I witnessed at the 20th Anniversary Outsider Art Fair.  I don't know Dean, but I somehow felt the same nostalgic and obsessive sweetness coming from his work as I did from Andrew's:  a sense of play, and a sense of devotion to playing.  But, unlike Andrew's childhood drawings, there is a posh finesse to Dean's work.  He takes the simplest of materials and fashions them into a sophisticated silver menagerie.  It's like merging those high-end aluminum foil swans fancy restaurants give you as doggie-bags with the mythology and grace of Noah's Ark.
Andrew is a Princeton University Professor.  Dean is an artist labeled with a disability.  But looking at their works I felt the same drive to make something out of nothing.  They both create art that has left its artifice and became blatantly something else, while also maintaining a certain stubbornly authentic aesthetic.  Purity is no longer an issue now that outsider art is what it is.  But purity and an intensity that "is always profoundly, unmistakably, inexplicably moving" comprise outsider art's essence, the reason it exists as a genre.  Placing Andrew and Dean's works side by side complicates "outsiderness" to the point it does not really make sense anymore, and yet maintains the idea that art set free from having to be art always somehow finds a way to exist with or without a fair or a genre or even an audience.
How do you celebrate that?
Posted by Keith at 8:58 AM 1 comment: