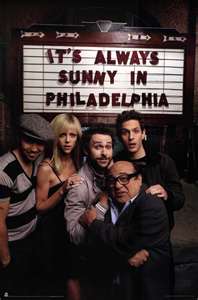 I only started watching it this season so I don't exactly get the relationships and/or the premise.  But that doesn't really matter.  I have gleaned from the four episodes I've seen this season that a bunch of smarmy, creepy idiots who interact like white-trash anchor-people about to go to commercial (one female and four males, one of them being Danny Devito, who seems to be the magic-worm in this cheap bottle of tequila) are always looking for a way to, well, I really don't know.  Always looking for a way to be the penultimate smarmy, creepy idiots they are supposed to be in this universe of dead whores in hallways, chimichangas in garbage bags, and (my personal favorite) rum-ham floating delicately on the ocean's surface.  The nastiness of the show is its surrealism, and each of the puppet-characters are hell-bent on being horrible and stupid to the point there's a magical rhythm, kind of like when the Three Stooges really get going.  Only these stooges don't move around that much.  No pies or slaps in the face.  Just constant bull-shit talking.  And a sucky, vast abyss always around every corner.

My favorite episode happened a week or so ago when Danny Devito's Frank Reynolds decides to host a kiddie beauty pageant in the bar all the characters seem to either co-own or maybe just co-habitate.  The first scene is a true slapstick gem:  Devito jogs into the bar to tell everyone about his beauty-pageant idea and falls flat on his face, busting his nose.  Horrible horror-movie blood trickles down Devito's troll-like face in a gruesome, hyper-real pattern copied it seems from the Busted-Nose Hall of Fame dictionary.  The episode quickly descends into beautiful and completely politically-incorrect madness:  Frank tries to cover his broken nose with funeral-home make-up, giving him the pallor and soullessness of Nosferatu with a hangover, and he spends all his screen-time with a microphone telling everyone in the audience how much he is not going put the moves on the little girls in the pageant.  Tall and blond and gawky, like a slightly less stressed Ann Coulter, Kaitlin Olsen also stands out, turning one of the contestants into her little dancing and singing co-partner, in a duet about how horrible mothers are.

In every episode I've seen, Charlie Day's weaselly face and high-pitched voice always add a sort of terrifying joy to the atmosphere.  He's the Willy Wonka on this melted-candy-bar planet.  The atmosphere rots your teeth, the people are worthless, the candy is poisonous, and every situation is contrived and quite stupid:  God do I love this show.

Too Good to be True 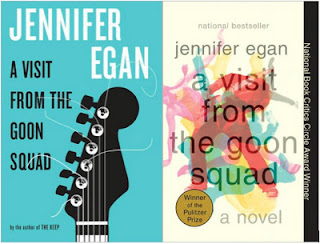 Jennifer Egan's A Visit from the Goon Squad is an organism constructed from completely disparate bits and pieces.  Moments most other writers would edit away are taken into the laboratory and turned into voluptuous Frankenstein fantasias:  its aesthetic can be located on an imaginary scatterplot documenting the exact location where John Barth has stopped trying so hard and Joyce Carol Oates has stopped taking her meds.  Each chapter has a new voice extolling the banal yet somehow significant (and oddly nostalgic) experiences of characters you barely get to know, and yet love and take into your soul almost instantaneously.  Passers-by become central figures, the periphery the focus.  And in these fringes Egan finds an apoplectic and apologetic record producer and his klepto assistant bumping into people and falling into their lives; each bump (like cocaine) creates a new way to reinvent the novel's plot.

What could be seen as gimmickry transforms into bliss.  Your heart aches with each sadsack yet somehow triumphantly alive character:  a once top-notch NYC publicist in sad decline, a beefy closeted gay college student about to find a way to completely ruin his own life, a Lindsay-Lohanesque starlet about to be disappeared, a bipolar journalist trying to reinvent the reason he is what he is.  And so on.  The writing never gets in the way:  it whispers/hisses/mumbles like a voice climbing out of your head but not through your mouth.  There's even a chapter done completely as a Power Point presentation from the future.

"Something was funny a while ago," Egan writes in one chapter.  "But you can't remember what."  Goon Squad is about laughter in the face of amnesia and laughter in the face of memory:  it merges the two into a slightly uncomfortable yet completely exquisite dreamworld where no one is important and yet everyone is.  It's like one of those long, boring, beautiful Andy Warhol movies edited into coherence and transformed into a glamorous, hellish TV miniseries from 1982 that never aired because it was too incredibly strange, too good to be true.
Posted by Keith at 6:21 AM No comments: