"Please Do Not Touch" 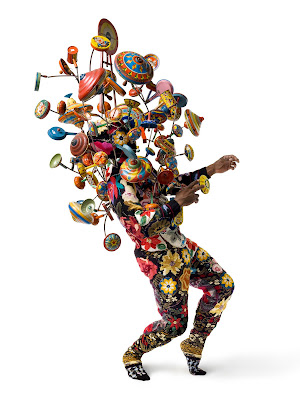 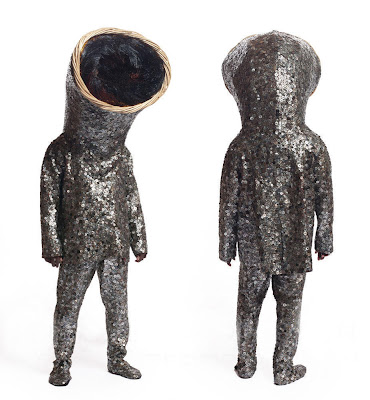 "Meet Me at the Center of the Earth," currently at the Cincinnati Art Museum, is a revelation.  A survey of Nick Cave's voluptuous costumes, performances and sculptures, the show is not actually an exhibit as much as an "invasion."  I put "invasion" in quotes because that's what Cave often calls what happens when people don his costumes and go gallivanting around town:  art takes over the atmosphere, and even the world.  And in this case the institution.  Cave's flirty, garish, gorgeous costumes merge the kitschy, kitchen-sink glamour of Bob Mackie with the folk-art intensity and precision of Thornton Dial.  Throw in some Leigh Bowery and Jim Henson and Alexander McQueen and (what the hell?) Parliament Funkadelic and you have yourself a militant miraculous mega-party in the RuPaul's Drag Race Interior Illusions Lounge.
Of course there's the high-minded allusions here to ancient rituals and African dances too, the Shamanistic obviousness.  But what I love about Cave's work is its complete and total showmanship, a dedication to spectacle that creates other worlds just through sheer force of will.  Hulking yet delicate, neon-colored as well as the mucky brown hues of old sweaters, his costumes/contraptions overtake each gallery at the Cincinnati Art Museum, functioning like a smart-assed Greek chorus chanting over and over how both important and unimportant art is.  Cave gets the joke, and his work has both the seriousness and the insouciance of greatness.
"Please Do Not Touch" state placards on the floor in front of each of his works; I kept hearing that phrase whispered over and over in the haughty, pissed-off voice of a spectacularly resplendent drag-queen.
Posted by Keith at 8:53 AM No comments: 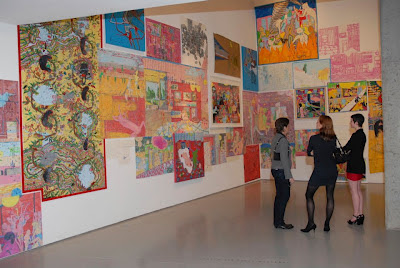 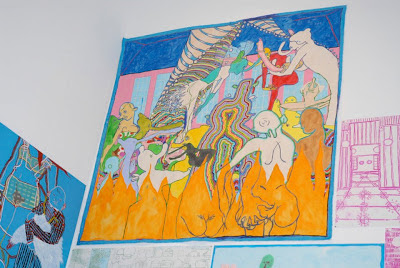 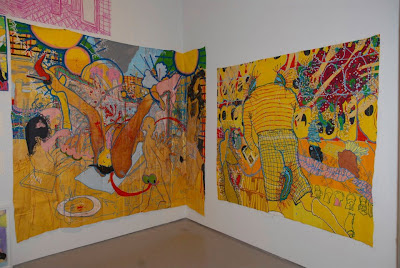 At the Contemporary Arts Center here in Cincinnati, a new show by Russian-born artist Dasha Shishkin, titled "I Surrender, Dear," stuns and amazes with its gauzy, junky ephemerality﻿.  Shishkin draws Henry-Darger-like fantasias on fabric, sheaths of beaten plastic, canvas, and other surfaces, and the results have been installed in a psychedelic salon-style merging art-school kitsch with the homegrown and beautiful creepiness of what many people unfortunately title "the art of the insane."  You know what I'm getting at:  this is "outsider art" sucked indoors, and Shishkin has the chops to make it seem both effortless and studied, obsessive and accomplished.  It's one of the best exhibits I've seen here in town in a long time.  The installation has a purposefully amateurish feel, but is spot on; little blue-ink drawings on cardboard provide punctuation to the onslaught of stream-of-consciousness visual poetry, and the motifs and tropes swim through each other like phosphorescent schools of fish. The show is heavy handed and hilarious, but executed with a fresh, esoteric ingenuity.  Shishkin has created a playfully mean spirited William S. Burroughs wall-novel.
Upstairs, however, is another exhibit titled "Spectacle:  The Music Video."  And this one is a mess.  And the mess doesn't seem on purpose.  I don't understand the point of view in it, or the way it's been installed, or even quite frankly the reason it is what it is.  The wall-text goes on and on about the importance of the music video to culture blah blah and blah, and the exhibition spills out all over the place in an unexquisitely junky tsunami of ephemera and TV screens and headphones, with a few old-school album covers and Polaroids tossed in just to add that nonchalant/arty touch.  I guess there's a big danger in titling anything "Spectacle."  That word becomes an albatross maybe around your neck?  The best part is a little cubbyhole where they've installed an alter to Michel Gondry's yarn-bombing video ur-text.  The rest, at least to me, comes off like a defunct Planet Hollywood.  I think we all know that music videos are "little movies."  And I also think we already know where they fit into the cultural landscape:  they are commercials.  Sometimes intentionally beautiful, sometimes unintentionally, and often not at all.  But they have a place at the back of our minds like little shiny trinkets in a junk-drawer.  When we open the junk-drawer they glimmer.  We look and see what they are and smile and then grab the screw-driver or the allen-wrench we're looking for.  To register the importance of this genre it might have been better just to survey one music-video artist's output, and trace that singular artist's evolution, buttressing this narrative with those "Big Moments in Music Video History" and all the ephemera.   It's a big stupid cliche, I know, but "less is more."  And boy does "Spectacle" prove that. 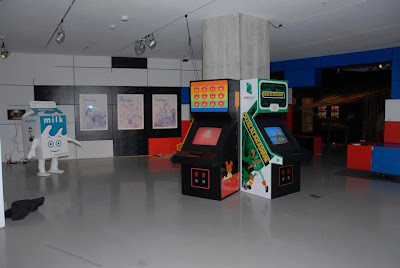 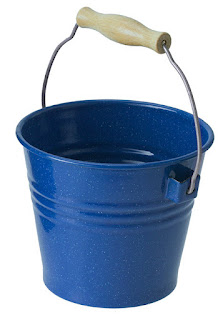 I was on a home visit this week and met someone who showed me his prized possession:  a little blue bucket.  I was sitting with him and his guardian filling out paperwork when he pointed to the floor, and there it was.  Shiny, small, blue, inconspicuous.  In a corner behind a La-Z-Boy.  He was totally proud of it, maybe beyond proud, and seemed to have found a place to hide it so he could reveal it to himself and other people whenever he chose.  It was as if he had made a connection with this object that transcended utility, common sense, and purpose.  It was aesthetic, the only object in the trailer that was poetic at that moment.  He said "That's my blue bucket"  a couple times, pointed at it, but he did not pick it up.  He said he used it for all kinds of things, but he didn't specify, except that sometimes it had dirt in it and other times cookies and other things.
On the way home I thought about the show we've got up at Thunder-Sky, Inc., "Small Potatoes," which features small objects and paintings made by unconventional artists intermingled with knick-knacks and trinkets from thrift-stores and other places (Images from "Small Potatoes").  That show is all about serendipity and ephemera, and when you're in it there's this magic disconnection from art, a flow like being in a Cracker Barrel store after the Apocalypse.  But in the trailer with the little blue bucket was a sort of reprieve, a lyricism glittering from that hidden object.  The little blue bucket was a center of awe, a testimonial to meaning.  It was like both a counterpoint to, and an annex of, "Small Potatoes."
The little blue bucket escaped art and has become art simultaneously.  The saying goes, "If a tree falls in the forest..."  But that's not it.  I stumbled onto a happiness and a beauty that does not need documented.  It doesn't need justified.  It's just there.
Posted by Keith at 6:01 AM No comments: