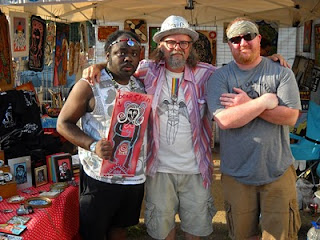 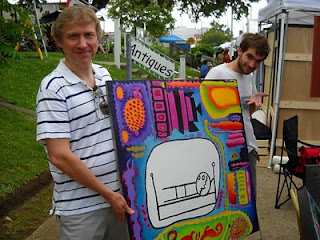 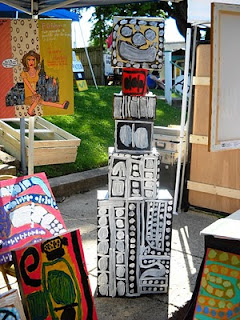 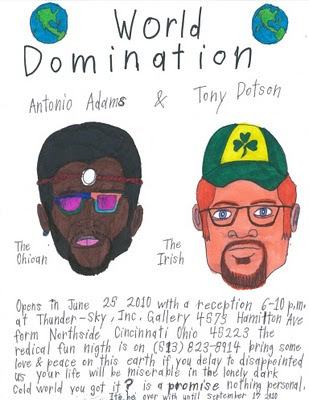 This is the poster Antonio Adams created for the next show opening at Thunder-Sky, Inc., "World Domination: New Works by Antonio Adams & Tony Dotson." Antonio and Tony have been working on some great stuff in the basement under Thunder-Sky, Inc. (we oh so cleverly call the space Under-Sky, Inc.), including both collaborations and individual pieces. They would at the same big table and are coming up with all kinds of energetic, bold, smart and funny paintings. Opening June 25, 2010, reception 6 to 10 pm. "World Domination" is upstairs, and in Under-Sky, Inc. we'll be debuting the group show "Kitty-Cat Extravaganza: Art about Cats," curated by Antonio, Melanie Derrick and Millicent Larson.
Posted by Keith at 7:51 AM No comments: 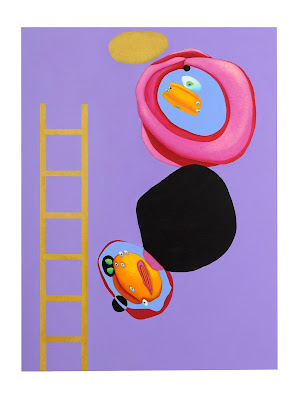 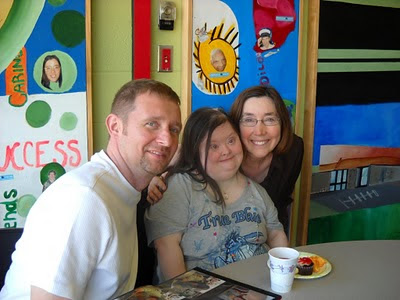 Thunder-Sky, Inc. Cofounder Bill Ross has done a series of works with Becky Iker, an artist from Middletown OH who is moving to Kentucky this week. Tuesday folks at Middletown Center (a day program Becky attends) gave her a going away party. Above:
a photo of Becky, Bill and Cathy Howell & a piece by Becky and Bill. We love you Becky! Bill and Becky have an exhibit of their works opening in October at Thunder-Sky, Inc.
Posted by Keith at 7:08 AM No comments:

What Is to Be Done? 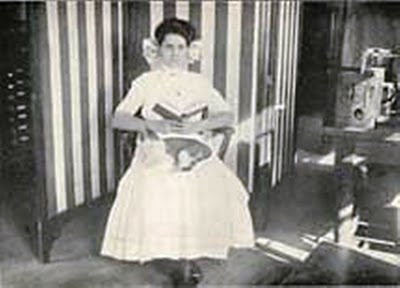 There's this ongoing collaborative project I've been working on for a while, stops and starts. Not a top priority, but it keeps coming back into my head as necessary. The Kallikak Family: A Study in the Heredity of Feeble-Mindedness was a 1912 book by the American psychologist and eugenicist Henry H. Goddard. The work was an extended case study of Goddard's for the inheritance of "feeble-mindedness," a general category referring to a variety of mental disabilities including mental retardation, learning disabilities, and mental illness. Goddard concluded that an entire variety of mental traits were hereditary and that it was important for society to institute a check upon the reproduction of "unfit" individuals.

The book for a time was all the rage in America, and even though Goddard's science was disproven, and he eventually apologized for the book, its echoes and demons still permeate the way we often see people with developmental disabilities. Goddard kind of let a genie out of the bottle, and the eugenics idea that "developmental disabilities" were something wicked and wrong that had to be fixed and/or eradicated still is the way many (most?) people view the issue.

The last chapter of the book is titled WHAT IS TO BE DONE? In it, Goddard states that "morons" and "idiots" and other "mental defectives" need to be colonized and sterilized in order to preserve society.

The book itself is free on Google. I downloaded it and read it and made a couple copies. Above is a photo of Deborah Kallikak (a made-up name) from the book. She is the central focus of the book. The last name "Kallikak" is actually the merging to two greek words, one meaning ugly and one meaning beautiful. The tracing of Deborah's "bad genes" back to a dallience Deborah's great-great-great-grandfather had during the American Revolution with a slutty tavern waitress is the core narrative: Mr. Kallikak had sex with the tavern girl and the progeny were "morons" and "idiots." He married an upstanding landowner's daughter and became a landowner himself, and guess what? The children from this convergence were upstanding, intelligent, capable...

The simplicity seems obviously vulgar now in our politically correct culture, but that narrative haunts perception still... Check out the way people with developmental disabilities are represented on TV and other media, or the way their narratives are constructed for them by the agencies and organizations who "help" them (think "Jerry's kids," or the "We need your help" campaigns for charities and government funds).

The assumptions around class and intelligence and capability and privilege always go unchecked, except by people who no one really listens to.

SO: this idea I have is to "revise" Goddard's tome, update it in a way that is both absurd and sincere, freaky and dead-on serious. One phase was to use the book's pages as stationary for some people with developmental disabilities to write the governor and other policitans in Ohio to request they remove "mental retardation" from the state and local agencies who deliver funding for services. Another phase: a wood panel covered in the letters that make up KALLIKAK was given to Kevin White, an artists labeled with "Down syndrome", who painted over the letters, using the negative and positive spaces made by the print to define his composition. Yet another phase: I gave Xerox copies of some of the exhaustively pseudoscientific graphs and charts that are in the book to a few artists who came to an opening at Thunder-Sky, Inc.; these artists drew over Goddard's science, turning the letters and lines into the beginnings of portraits and caricatures.

Just recently I gave the above picture of Deborah to students in a creative writing class I taught at Miami University as a writing prompt. I asked them to imagine a life and a life-story for the woman pictured. Then after they wrote the piece I told them who she was in actuality (she WAS Goddard's fiction, but real as well), and told them to do some research about her, and the way she received her name, and then to use these "facts" in a revision of the story.

All in all I am developing a portfolio that eventually we'll try to publish at Thunder-Sky, Inc., during an upcoming 2 + 2 = 5 exhibit, set to debut in April,2011. By then I'll have come up with some more "phases" I'm sure. The book will be titled: WHAT IS TO BE DONE: THE KALLIKAK FAMILY REVISITED AND REVISED.
Posted by Keith at 2:33 PM 1 comment: