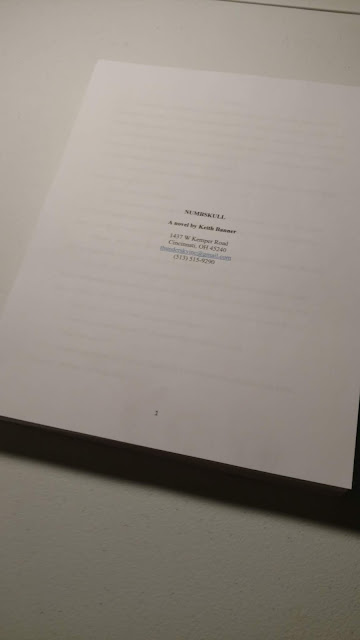 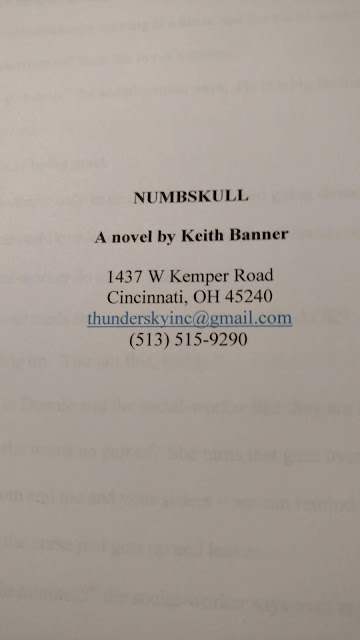 After 3 + years I've finally reached a point in writing this novel that I printed it out on paper.  It's like a return to paper in a way; I actually wrote all of it in cursive in notebooks and then typed it in, and then wrote some more on it in the laptop, excised a lot more, wrote more, revised, cut, reinvented, re-imagined, wrote more in notebooks, typed more in, revised, excised, capitulated, rethought...

I started this thing June 2015 with a desire to write a visceral serial-killer kind of gig with a big old sense of humor and a messed up plot.  As I wrote and wrote, though, I found myself falling in love with the people I was having to kill, as well as the killer.  Because of that surprise discovery of love or whatever, I had to cut about half, about 200 pages of what I'd written.  I've stowed it away to work on maybe later, but what was left was the spine of what I printed out yesterday.  I found out I wanted exposition, I wanted intimacy and oddness and I wanted to find out why I want to write while I was writing.

I guess this is why:  to stumble upon a voice I hear all the time and yet never gets spoken, to be able to carefully mic that voice and record it and then carefully transcribe it and find a structure for it to live in.  Or in literary terms:  a plot that will carry the voice out of itself, into realms of wonder and creepiness and exultation and yes love.  That's what I think I've done here, but it ain't finished yet.

It's currently 227 meticulously edited pages.  I think it was F. Scott who said or wrote, "Write drunk, edit sober," and that's kind of it in a nutshell.  I was open and flagrant and overt and flowery and grabbing at everything while writing in cursive in my notebooks, and then I'd set that shit aside and come back stone-cold and wide-awake and I'd type it all in and then chip away at the faulty log-cabin I'd built with words.  I'd excise the curlicues, the eager-to-impress flourishes, the dialog that tells you what you don't need hear.  Cut and sliced until I chipped through a wall and found that voice was finally where it was supposed to be, doing what it needed to do to have meaning enough to merit a book.

"Bob Anderson" is the name I gave to this voice.  He's the narrator of the whole thing, and his life is unfurled inside it.  It's a small and inconsequential life, but it somehow made me want to work really hard to convey it without pride or sentimentality, but with a sort of just-got-off-third-shift empathy you can't fake.

I have a file on my desktop marked "NS 2018," and inside it is all the stuff I cut, word-docs labeled all kinds of things: 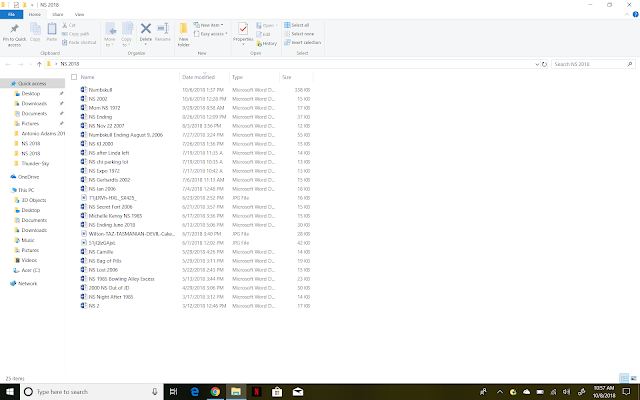 All the crap I cut but did not want to lose.  But I had to lose in order to get what I needed.  That's writing, right there.  Add I've been writing for, Jesus, 30 years.  I don't think you'd call it "professionally," but maybe "as an adult."  I've been writing poems and short stories and novels that long.  I've published about 60 short stories in journals and magazines and online joints, 50 or so essays and art reviews, 1 novel, and 2 books of stories.  I've gotten a couple nice awards, some good reviews, some rotten ones too.  I've taught writing to a lot of college and post-college students.  I've done maybe 20 or so book reviews for different magazines and newspapers too.

But I've actually done and written a ton more than that of course.  Not bragging just cataloging I guess:


All of that work has gone into the writing of this thing called Numbskull.

I think I won't be finished with it for another few months.  Then I'll be looking at the best way to proceed.  This time, though, I have written it without worrying about its departure.  In fact I dread losing it to the world.  Weird but true.  Writing it has taught me not just how to write better, but how to live and work and "be" better too.  I don't know why this happened with this one.  Maybe it's because I'm 53.  Maybe it's because I finally found a way to convey what I need to convey without having to explain or poeticize or whatever.

Or maybe it's just because I say so.  Hell who knows?

I'll keep you posted on its journey to wherever.  Right now though I'm going to read through the paper copy I've printed out, red pen in hand.  Total old-school.  Feels good.